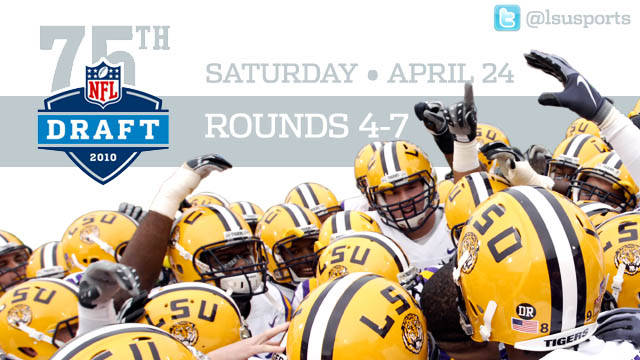 NEW YORK — A total of four LSU Tigers were selected on the final day of the 2010 NFL Draft and LSU finished with the fifth highest total among all schools in the nation for players chosen with six.

Two Tigers followed in the sixth round. Running back and return specialist Trindon Holliday  went to the Houston Texans as the 28th pick of the sixth round (No. 197 overall) and running back Charles Scott followed three picks later at No. 31 (No. 200 overall) to the Philadelphia Eagles.

The four players join safety Chad Jones and wide receiver Brandon LaFell, who were chosen on Friday. Jones was picked by the New York Giants with the 76th overall selection, while LaFell went two picks later at No. 78 overall to the Carolina Panthers.

Since Les Miles took over as head coach in 2005, LSU has now had a total of 31 players chosen in the NFL Draft. The Tigers once again ranked among the nation’s elite schools with the fifth-most players chosen. Florida led the way with nine. LSU also had six draft picks last season.

Riley joins former LSU All-American safety LaRon Landry and defensive tackle Howard Green on the Redskins. For his career, Riley recorded 185 total tackles, which included 13 tackles for losses and two sacks. He ranked second on the squad in total tackles with 97 as a senior while starting at 13 games.

Woods will play professionally not far from his hometown of Elton. He joins a Saints team that is coming off its first ever Super Bowl championship. Woods becomes the third LSU Tiger to be named to the current Saints roster that features wide receiver Devery Henderson and cornerback Randall Gay. He is the first LSU player selected by the Saints since Henderson in 2004.

Holliday, who dazzled scouts at the NFL Combine with a 4.34 in February, heads to Houston after finishing his LSU career ranked seventh in career punt return yards (647) and second in career kickoff return yards (1,806).

Scott is the first LSU player to be taken by Philadelphia in the draft since Norman LeJeune in 2003.