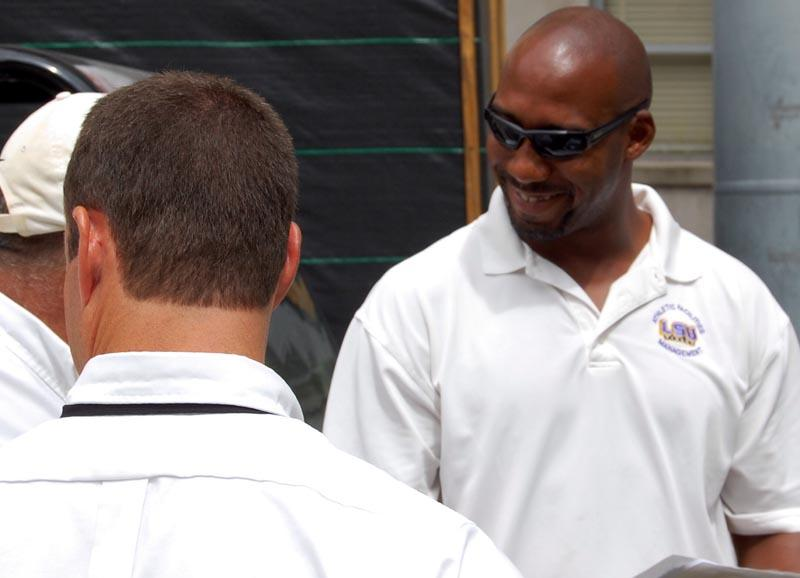 BATON ROUGE – Ronnie Haliburton remembers it as if it were yesterday. After all, days like this don’t come around often, and for most people, the day never comes. But for Haliburton, he was about to fulfill his childhood dream of getting selected in the NFL Draft.

Back in 1990, the NFL Draft was different – no round the clock television coverage on ESPN, no internet to track every pick, no draft gurus analyzing every pick. The draft hadn’t been transformed into a made-for-TV event like it is today as it started on a Sunday morning and continued through Monday.

For Haliburton, that April weekend in 1990 was going to be his chance to take the next step in his football career. Now, all he needed was for the phone to ring.

“I remember that weekend vividly,” Haliburton, the former standout tight end for the Tigers from 1986-89, said. “We got up on Sunday morning, went to early Mass as a family and then came home and got ready for the draft. We had a house full of family and friends and dad was outside barbequing. We were just waiting for the draft to get started and we were all excited waiting for that phone call.”

For Haliburton, Sunday became a day of waiting at his parents’ home in Port Arthur, Texas, as the first round came and went without a call. But that was okay for Haliburton because he wasn’t projected to go until the third or fourth round. One by one, Haliburton saw his LSU teammates get picked – offensive lineman Kenny Davidson in the second round to the Steelers, quarterback Tommy Hodson in the third round to the Patriots, wide receiver Tony Moss and running back Eddie Fuller in the fourth round to the Bears and Bills respectively.

“Seeing my teammates get picked only got me more excited,” Haliburton said. “When Tommy got picked in the third round, I felt like my name was going to get called at any moment.

“Once we got into the fourth round, I thought this would be the round that I would get picked. When (tight end) Jackie Harris (of Northeast Louisiana) got picked, I felt like my chance was coming.”

Haliburton would have to wait as Sunday ended with no call as the first day of the NFL Draft concluded after the fourth round with his name still on the board. A frustrated Haliburton went fishing as an attempt to ease the disappointment of the day.

“You go from a day that started with excitement to one that ends in you being disappointed,” Haliburton said of not being drafted on the first day. “I just had to get away for a while so I went fishing to get my mind off of things”

The second day of the draft came on a Monday morning and so that meant it was back to school for Haliburton, who had to make the four-hour drive back to Baton Rouge. With the draft already underway and well into the sixth round, Haliburton decided he would learn his fate once he arrived back on the LSU campus.

“I was packing my car getting ready to leave the house and head back to Baton Rouge when the phone rang,” Haliburton recalls. “It was Coach (Pete) Mangurian and he said, ‘Hali, we have you’. He then handed the phone to (head coach) Dan Reeves and he welcomes me to the team.

“It was pretty cool and a huge relief. I drove from Port Arthur to Baton Rouge on cloud nine. I was excited but I couldn’t talk to anyone because back then there weren’t any cell phones so I had to wait until I got back to campus.”

Haliburton, who moved from tight end to linebacker once he arrived in the NFL, spent three years with the Broncos, playing with the likes of John Elway, Shannon Sharpe and former LSU standout Michael Brooks. Injuries cut Haliburton’s career short in Denver following the 1993 season.

Haliburton did have another chance at an NFL team as the Dallas Cowboys called him and invited him to a mini-camp in the spring of 1994. At the time though, Haliburton had returned to LSU and had a 4.0 grade point average while carrying 18 hours during the spring semester.

“I was having a great semester academically with a 4.0 gpa,” Haliburton recalled. “I had finals coming up and they wanted me to come up on a Wednesday and stay through the weekend to take part in this mini-camp. I told them about my academic obligations and that I wouldn’t be able to make it there until Friday. They told me that they would talk to the head coach and call me back. I never got called back.”

Haliburton did get one more season in as a pro, spending the summer of 1994 with Shreveport of the CFL. Haliburton retired from the game following his one-year in the CFL.

Haliburton graduated from LSU in 1996 and he’s been part of the University since, serving in roles at Residential Life and Facilities Services. Haliburton joined the athletic department in 2003 and he’s currently an associate athletic director responsible for athletic facility management.

“To be selected in the NFL Draft was a tremendous honor,” Haliburton said. “Football gave me an opportunity to accomplish things on and off the field and it allowed me to have experiences that I would not have otherwise had.”