Day Two of NFL Draft Should Be Busy For LSU 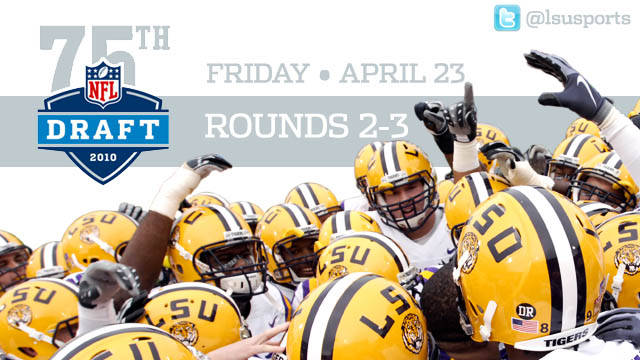 BATON ROUGE — Things should pick up for LSU players at the NFL Draft today as several Tigers have been slotted as either second or third round picks.

The NFL Draft resumes at 5 p.m. today with the second and third rounds being televised on ESPN. The NFL Draft concludes on Saturday with rounds four through seven. Come Saturday afternoon, as many as 12 Tigers have a shot at being picked in the NFL Draft.

The first round of the draft was held in Prime Time on Thursday, and for the first time since the 2003 draft, LSU didn’t have a player selected in the opening round, snapping a six-year streak for the Tigers.

It shouldn’t take long for LSU to get its first player taken today as  S Chad Jones, WR Brandon LaFell, RB Charles Scott, RS/WR Trindon Holliday and DT Al Woods have all been projected as second or third round picks. Jones and Woods are likely the first two Tigers to be taken, followed by LaFell, Scott and Holliday.

Woods jumped up the draft boards following his performance at the NFL Combine in February has he ran a 5.12 40-yard dash and was among the best in the vertical jump with a leap of 37″ – not bad for a guy who weighs 300 pounds. Jones, who departed LSU after his junior season, is popular with the NFL teams because of his outstanding athletic ability. Jones, who only had one full season as a starter at safety for the Tigers, has tremendous upside and will be drafted by a team looking for a play maker at safety as well as one who can deliver a vicious hit.

Scott is a bruising running back, who has excelled at catching the football out of the backfield as well as being a valuable member of the LSU special teams during his career. Scott had his senior season cut short due to a broken collar bone suffered against Alabama. He has had a full recovery and performed well during LSU’s Pro Day back in March.

LaFell left LSU as one of the most productive receivers in school history with 175 receptions for 2,517 yards and 25 touchdowns and he will give a franchise big-play capability at that position. Holliday is a speedster who will likely be used as a kick returner at the next level. Holliday used workouts at the NFL Combine and LSU Pro Day as a chance to show teams that he can also catch the football, either out of the backfield, or from the wideout position. With sub-4.4 speed, Holliday is just too fast for teams to pass up.

Could There Be Another Mr. Irrelevant From LSU

Outside of the No. 1 pick in the NFL Draft, the player who is likely to garner a great deal of publicity, outside of Tim Tebow of course, is the last player selected, also known as Mr. Irrelevant. Barring a trade, this year’s Mr. Irrelevant will go to the Detroit Lions with the 255th pick of the draft.

LSU has had the distinction of having had both the No. 1 overall pick in the draft (Billy Cannon in 1960 and JaMarcus Russell in 2007) as well as the final pick in the draft – Mr. Irrelevant – in 1987 (Norman Jefferson). In 1987, Jefferson became LSU’s first and only Mr. Irrelevant, going to the Green Bay Packers in the 12th round with the 355th pick. Jefferson, a native of Marrero, La., played two seasons with the Packers. In 1987, he played in 12 games on special teams and he followed that with two appearances on special teams in 1988. He finished his career with five punt returns for 15 yards and with six kickoff returns for 136 yards. Jefferson played one year in the CFL before retiring from football.

Rondell Mealey almost became LSU’s second Mr. Irrelevant in 2000, but he came up two picks short. Green Bay drafted Mealey with the 252nd pick (out of 254 picks) in 2000, leaving Mike Green of Northwestern State as Mr. Irrelevant that year.