Dozen Tigers on the Board for NFL Draft 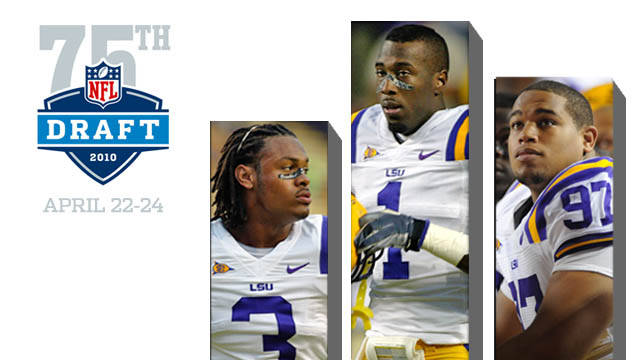 BATON ROUGE — A record number of LSU football players are expected to take the jump to the professional ranks starting Thursday as the NFL will holds its annual draft beginning at 6:30 p.m. CT at Radio City Music Hall in New York City.

This year’s NFL Draft has been expanded from two days to a three-day event with rounds two and three taking place at 5 p.m. CT on Friday. Rounds four through seven will be held on Saturday starting at 9 a.m. CT. All seven rounds of the draft will be televised on ESPN.

LSU goes into the 2010 NFL Draft with as many as 12 Tigers from the 2009 team having a shot at getting selected. Currently, the LSU record for draft picks in a single season came in 1948 when eight Tigers were picked. Since the NFL went to a seven round draft in 1994, the record for most Tigers picked has been seven, which has been done three times – 2004, 2006  and 2008.

Last year, LSU had six players picked in the draft, including the No. 3 overall selection in Tyson Jackson, making him the highest selected defensive player in school history. The Tigers also had a pair of fifth round picks, and three seventh round selections last year.

Since arriving t LSU in 2005, Miles has seen 25 Tigers go in the draft, which includes seven first rounders. The 25 NFL picks for the Tigers over the past four years is the second-highest total over that span in school history, trailing the 27 selected from 1987-90 when the draft went 12 rounds. Under Miles, LSU had seven players picked in both 2007 and 2008 with six going last year and five going in 2007.

LSU goes into the 2010 NFL Draft with college football’s longest streak of first round selections at six consecutive years. LSU has had at least one first round draft pick going back to the 2004 draft when Michael Clayton was taken No. 15 overall by Tampa Bay. In 2007, a record four Tigers were picked in the first round including the No. 1 overall selection in quarterback JaMarcus Russell.

Among the first Tigers expected to hear their name called this weekend include safety Chad Jones, wide receiver Brandon LaFell, and defensive tackle Al Woods. Jones, a tremendous all-around athlete who left school with one year of eligibility remaining, has been tabbed anywhere from last in the first round to the third round.

Woods turned heads at the combine with an outstanding performance, which included a vertical leap of 37 inches and a 40-yard dash time of 5.12. As a result, Woods has jumped up the draft boards and could go as high as the second round. LaFell, who left LSU as one of the school’s all-time leaders in receiving, has been targeted anywhere from last first round to the third round.