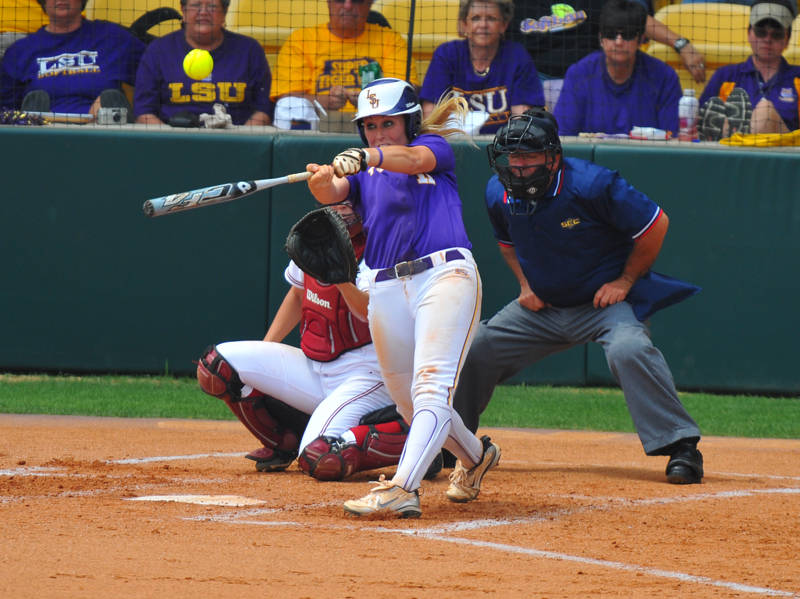 BATON ROUGE – The No. 16 LSU softball team concludes the non-conference portion of its schedule with a Wednesday tilt against McNeese State. First pitch is slated for 6 p.m. at Tiger Park.

The Tigers (36-9, 14-5 SEC) are coming off a three-game sweep of Arkansas to strengthen their grasp of second place in the SEC Western Division standings, while McNeese State (24-23, 8-11 SLC) dropped two of three to Texas A&M-Corpus Christi.

“We’d like to continue to find our bats and swing them consistently,” head coach Yvette Girouard said. “There are some things that we need to clean up before facing a dangerous Kentucky team in Lexington. I’d like to pitch Brittany Mack and have her get off to a good start. She was a hard-luck pitcher Saturday where the ball had eyes and found holes against her.”

LSU has had five players drive home 20 or more RBIs on the season. Rachel Mitchell and Anissa Young headline the group with 34 and 33 RBIs to rank 10th and 11th in the SEC, respectively.

Reigning LSWA Hitter of the Week, Ashley Langoni, has picked up 11 RBIs over her last seven games and matched a career-best four RBIs last Wednesday at Nicholls State. She also provided the game-winning hits during the first two games of the Arkansas series sparked by a walkoff double during the 10th inning of game two.

“I’ve said it time-and-time again that it’s always about timely hitting,” Girouard said. “We may get outhit from time-to-time but it’s when you get the hits that give the game a unique aspect. Ashley is one of the better outfielders in the country right now and doing a great job of driving the ball. She’s also stepped up for us in those critical RBI situations.”

Kirsten Shortridge has put together a five-game hitting streak en route to a team-best .408 hitting clip. She also has swiped 37 stolen bases to check into second place in the SEC rankings.

Ashley Applegate has boosted her average to .309 and drawn a team-high 27 walks to compile an impressive .469 on-base percentage.

The Tigers are scheduled to welcome Morgan Russell back to lineup. The sophomore catcher has gone 15-for-41 and added nine RBIs during her last 20 games before a four-game hiatus last week.

“Morgan does a great job of handling our pitching staff,” Girouard said. “It’s been a learning process, but she’s worked extremely hard on gaining their trust. I also love her ‘I will succeed’ attitude at the plate.”

Cody Trahan, Rachele Fico and Brittany Mack anchor the LSU pitching staff which ranks not only No. 1 in the SEC but No. 2 nationally with a 1.27 ERA. The trio also ranks 1-2-3 among SEC individual ERA.

Fico picked up SEC and LSWA Pitcher of the Week accolades earlier this week and comes in with a 14-4 mark. She has racked up 115 strikeouts over 109.2 innings and limited opponents to a .177 batting average.

Trahan recorded a pair of wins in games one and three of the Arkansas series to improve her record to 9-2 on the season. She has an impressive 93 strikeouts against 14 walks in her 92.0 frames of work.

Mack has garnered an 8-2 ledger and won seven straight decisions dating back to February 20, including a trio of league wins over South Carolina, Auburn and Mississippi State.

Wednesday’s game will be broadcasted live on ESPN 104.5 and The X 104.9 FM in the Baton Rouge area with Patrick Wright and Kent Lowe set to call all the action. Live video and stats also are available in the Geaux Zone along with in-game updates via http://twitter.com/lsu_softball.

The Tigers will honor senior woman administrator Judy Southard, who is retiring from LSU in June with a special ceremony prior to the game.

“Judy has been very supportive and a great friend through my tenure,” Girouard said. “She has made LSU softball better whether it be adding staff or listening to my constant attention to trying to get the stadium built. We wish her nothing but the best and hope she enjoys her retirement to the fullest.”

Tickets are on-sale now and can be purchased online on LSUsports.net, the official Web site of LSU Athletics. Tickets also can be purchased in person on the first floor of the Athletics Administration Building.

The Tiger Park Ticket Trailer opens at 4:30 p.m. on gameday and Wednesday’s game marks the final Weekday Worker contest where fans can purchase $3 tickets at the game when presenting their business cards for a chance to win a prize pack.