LSU Set to Send Another Group to the NFL 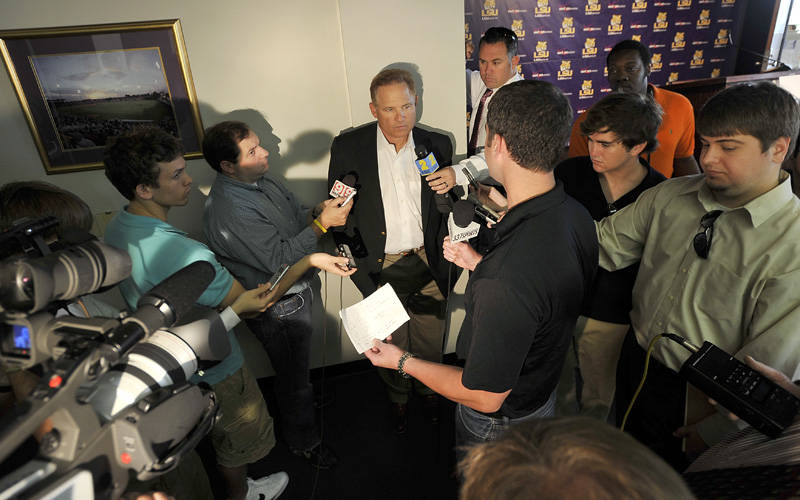 BATON ROUGE – Since arriving at LSU in 2005, head coach Les Miles has seen 25 Tigers selected in the NFL Draft. LSU will add to that number starting later this week when the annual NFL Draft takes place at Radio City Music Hall in New York City.

This year’s NFL Draft has been expanded to three days, with the first round starting at 6:30 p.m. on Thursday. Rounds two and three will take place on Friday beginning at 5 p.m. CT, followed by the final four rounds on Saturday starting at 9 a.m. All seven rounds of the NFL Draft will be televised on ESPN.

While LSU is not projected to have a first round pick this year, the Tigers are expected to test the school record for NFL picks in a single draft with as many as 12 players having a shot at hearing their name called either on Friday or Saturday.

The school record for NFL picks in a single season for LSU came in 1948 when eight Tigers were drafted. LSU has had seven players taken in the draft seven times, including twice during the Miles era in 2006 and 2007. Last year, six LSU players were drafted, including Tyson Jackson with the No. 3 overall pick as he became the highest-drafted defensive player in school history.

LSU goes into the 2010 NFL Draft holding the longest active first round streak in college football. The Tigers have had at least one first round selection dating back to 2004 when Michael Clayton was picked No. 15 overall by the Tampa Bay Buccaneers. A record for Tigers were picked in the first round in 2007, including the top overall selection in quarterback JaMarcus Russell and the No. 6 overall pick in safety LaRon Landry. Wide receiver Dwayne Bowe went No. 23 that year to Kansas City, while Craig Davis was picked 30th overall by the Chargers.

The 48 Tigers on NFL rosters in 2009 was the highest total in school history and it also ranked among the most of any school in college football. Of those 48 LSU players in the NFL in 2009, 28 played under Miles and 29 of them were considered starters for their respective franchise.

The 25 NFL picks for the Tigers over the past four years is the second-highest total over that span in school history, trailing the 27 selected from 1987-90 when the draft went 12 rounds. Under Miles, LSU had seven players picked in both 2007 and 2008 with six going last year and five going in 2007.