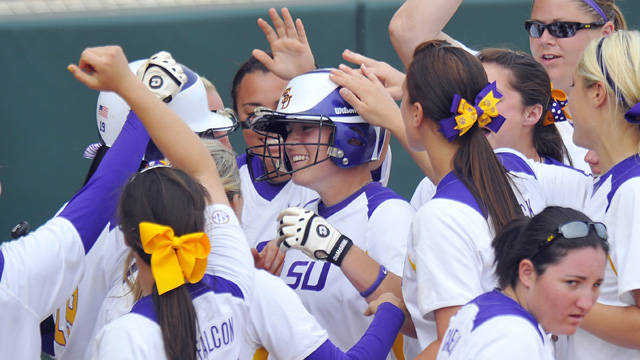 A sophomore outfielder for the Tigers, Langoni provided the late-inning heroics as LSU swept Arkansas for the third time during the last four seasons. Five of her six hits knocked home eight RBIs on a .419 hitting clip for the week. Langoni belted a two-run homer during the fifth inning to break a 2-2 tie in the Arkansas series opener. She added a walkoff double in the 10th inning of game two. The Colorado native opened the week and matched a career-best four RBIs at Nicholls State.

Fico, a freshman pitcher for the Tigers, tallied a 2-0 week with a save and tossed 12.1 frames of shutout relief. She racked up 14 strikeouts highlighted by back-to-back Ks with the bases loaded and one out to close out the third inning and keep LSU’s deficit at 2-0 during the middle game of the Arkansas series.
The Connecticut native sat down the final 12 batters she faced, four via the strikeout, as the Tigers rallied for a dramatic 3-2 10-inning triumph. Fico capped her week and added two more scoreless frames en route to her fourth save of the season to match a LSU single-season program record held by three-time All-American Britni Sneed and Sarah KnifeChief.

It’s the third weekly award for Fico and second for Langoni from the LSWA. It marked the second straight week Krieg has won the honor.