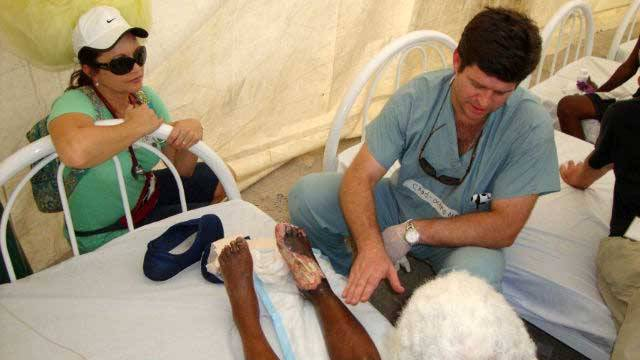 In the days following the 7.0 earthquake that ripped through Haiti, an estimated 222,570 Haitians lay dead. Thousands more wandered the streets injured in search of water, food and medical care.

Almost half of the nation’s population was under the age of 18. Heart-wrenching accounts of children sleeping among the bodies that lined the streets filtered out of the country. Without a home to go to, countless children, some in need of dire medical care, roamed the streets in search of their parents or a familiar face.

The shock of the catastrophe far surpassed the shockwaves of the deadly quake. The cries of Haiti were heard far beyond its borders, and the call was not only answered by entire countries, but courageous individuals as well

Two miles from the Haitian border, nestled between scenic mountains, several bright white building lie grouped together, a shining beacon of hope for the children of Haiti — Good Samaritan Hospital.

Chad Loup, an LSU alum and former quarterback for the Tigers from 1990-93, spent one week at the hospital, located in Jimini, Dominican Republic. The Baton Rouge native and orthopedic surgeon felt compelled to take part in a medical mission after his wife returned from Haiti where she served as the medical director of the hospital.

“After the devastating earthquake, there was an urgent call for orthopedic surgeons to help with the traumatic limb-threatening injuries,” Loup said. “Some of my partners had been going on a weekly basis to help operate, and it was a great opportunity to go help. Many times in emergency disaster relief, surgeons aren’t always needed in such a critical way as in Haiti.”

“Nothing can truly prepare one for the devastating poverty, which is overwhelming,” Loup remembered. “The injuries were devastating, especially the ones involving children. There were many amputations and limb crushing injuries, and sickness began to affect the patients housed in tents in camps.”

In the face of adversity, Loup worked along with his team and performed surgery in makeshift operating rooms, as well as administered wound care and applied and removed casts.

The refugees needed not only medical care, but help fulfilling their physiological needs. The quake damaged many of the wells and food supply as well, leaving Haitians severely dehydrated and starving.

“We helped deliver food to families in remote villages who could not get to the refugee camps for help,” Loup explained. “They were so kind and gracious for our help, and never complained about their plight, only had big smiles. Never in our lives in the (United States) do we encounter that strength of spirit in the face of such poverty and disadvantage.”

On the heels of the country recovering from the catastrophic quake, another problem lies in its immediate future. Haiti’s rainy season lasts from May to July and is followed by hurricane season from July to October.

“In the short run, the Haitian’s need housing to withstand the upcoming rainy season as the tents won’t hold up,” explained Loup.

Also, Loup is concerned with the long-term recovery for Haiti. Crippling poverty coupled with years of political corruption and a failing infrastructure threatened to leave Haiti in ruins long before the 7.0 earthquake rocked the nation. Now, the people of Haiti are faced with a new challenge-rebuilding.

“The Haitian people are in tremendous need of improving the infrastructure of their country, new construction, and the development of an agricultural system,” Loup said.  “The political climate of Haiti unfortunately limits their ability to progress. Building their educational system to instruct the youth on how to improve their lives would be beneficial.”

Editor’s Note: Dr. Brent Bankston and Dr. Larry Ferachi, orthopedic surgeons who work with the LSU Tigers football team, also spent a week in Haiti to aid the medical effort by performing operations after the earthquake.