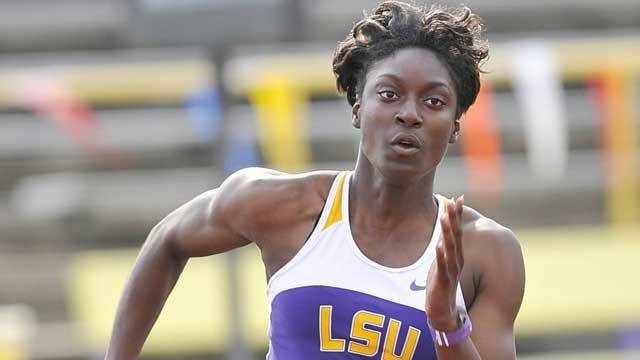 BATON ROUGE – A member of the LSU track and field program has been honored by the Southeastern Conference with one of its weekly awards for the fourth-straight week as senior star LaTavia Thomas was named the SEC Female Runner of the Week and freshman Kimberlyn Duncan was awarded with the SEC Female Freshman of the Week honor on Tuesday afternoon.

The Tigers and Lady Tigers have been a staple in the voting for SEC weekly awards as they have earned a total of nine SEC Athlete of the Week honors between the indoor and outdoor campaigns in 2010.

After earning All-America honors with a third-place finish in the 800-meter run at the NCAA Indoor meet in March, Thomas established herself as an NCAA title contender outdoors with her effort on Saturday afternoon at the LSU Alumni Gold held at the Bernie Moore Track Stadium.

She became the No. 1-ranked performer in both the SEC and NCAA by more than two seconds with a PR of 2 minutes, 1.40 seconds to finish in second place in the championship final. It took a facility record run of 2:00.77 by former Lady Tiger national champion and 2008 Olympian Neisha Bernard-Thomas to deny Thomas the event crown during Saturday’s competition.

Thomas broke her previous personal best of 2:01.56 that she set in a third-place finish at the 2009 NCAA Outdoor Championships a year ago. She now holds the No. 1 spot in the NCAA this season by more than two seconds over teammate Kayann Thompson, who ranks No. 2 nationally with a time of 2:03.54.

Duncan is the second Lady Tiger in as many weeks to receive SEC Female Freshman of the Week honors after teammate Takeia Pinckney picked up the award a week ago.

Duncan dominated the 200-meter dash in her 2010 outdoor season debut at the LSU Alumni Gold with an impressive wind-aided time of 22.96 seconds to take home the event crown. She ran with a slight tailwind of 2.4 meters per second for the No. 2-ranked time in the SEC and the No. 3-ranked time in the NCAA for the spring under all conditions. Duncan is also the No. 1-ranked freshman in the country in 2010.

A native of Katy, Texas, Duncan had not run the 200-meter dash since lining up in her first appearance at the NCAA Indoor Championships in March. She entered the weekend with a top indoor and outdoor time under all conditions of 23.46 set at the Texas state championships during her senior season a year ago.

In addition to her performance in the 200 meters, Duncan ran the second leg on LSU’s 4×100-meter relay team that won the event title with its second-fastest time of the season at 43.54.