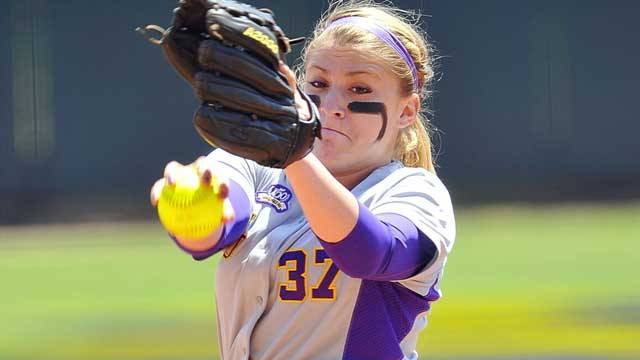 BIRMINGHAM, Ala. — LSU freshman pitcher Rachele Fico tallied SEC Pitcher of the Week honors Monday as announced by the league office. It marks the second weekly award for Fico from the SEC as she garnered the conference’s freshman of the week accolades on March 22.

LSU (36-9, 14-5 SEC) has won 25 consecutive games at Tiger Park and remained one game behind Alabama in the SEC Western Division race.

Fico is the first player in program history to earn this prestigious honor as a freshman. She notched a 2-0 week to go along with a save and fired 12.1 innings of scoreless relief. The Connecticut native recorded 14 strikeouts and held opponents to a .150 hitting clip.

Fico was instrumental in the Tigers sweep of Arkansas. She entered the middle game of the series with the bases loaded and one out in the third inning. After reeling off consecutive strikeouts to hold the LSU deficit at 2-0, Fico proceeded to mow down the final 12 batters she faced, four via the strikeout, as the Tigers rallied for a dramatic 3-2 10-inning triumph.

Fico capped her week with two more scoreless frames highlighted by a pair of seventh inning strikeouts as LSU emerged with another 3-2 victory. She added her fourth save of the season to match a LSU single-season record held by three-time All-American Britni Sneed and Sarah KnifeChief.

The Tigers wrap up the non-conference portion of their schedule Wednesday against McNeese State. First pitch is scheduled for 6 p.m. at Tiger Park and the game will be broadcasted live on ESPN 104.5 and The X 104.9 FM in the Baton Rouge area with Patrick Wright and Kent Lowe set to call the action.

Live video and stats also are available in the Geaux Zone on LSUsports.net in addition to in-game updates via www.twitter.com/lsu_softball.

Tickets are on-sale now and can be purchased online on LSUsports.net, the official Web site of LSU Athletics. Tickets also can be purchased in person at the Tiger Park Ticket Trailer starting at 4:30 p.m. on gameday.