Britt was the Epitome of a 'Student-Athlete' 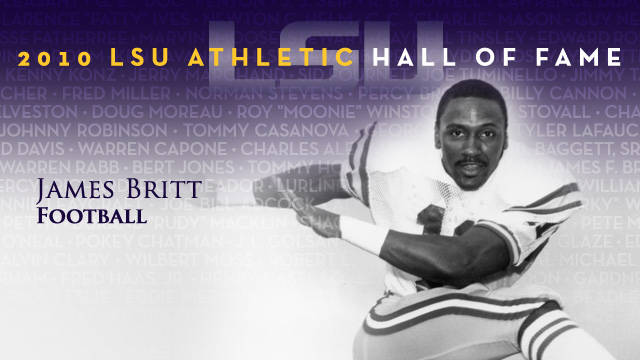 Coming out of Minden High School in 1978, LSU football signee James Britt was anything but a typical college football recruit.

Britt, who was named Louisiana class 4A Defensive Player of the Year as a senior in 1977, started his first game ever as a Tiger in the 1978 season opener against Indiana after fifth-year senior cornerback Clinton Burrell got injured in fall camp.

“It was very scary,” Britt recalled. “I had played in front of maybe a thousand people before, but nothing like Tiger Stadium.”

A year prior to Britt making his LSU debut in his first career game, the 6-0, 193-pound cornerback had no aspirations of playing college football. In fact, Britt was more interested in attending Southern University to pursue a degree in engineering.

“If you would have asked me what I’d be doing after high school, I’d have told you to look me up at Southern,” Britt said. “I had no idea I’d be playing college football.”

However, after an outstanding senior season in which he garnered all-district MVP honors on offense and defense, Britt accepted a scholarship offer from head coach Charles McClendon, although football was close to secondary on Britt’s list of priorities.

With a 4.0 at Minden High, Britt’s academic prowess was on-par with his athletic accomplishments, and the future three-time Academic All-SEC selection was determined continue that balance.

“You got to come and play football, but also had the opportunity to get a good education, and I wanted to make sure I got that out of the deal,” Britt explained. “Education is always important, and it was one of those things I was competitive about, just like football. Education and football kind of came hand-in-hand.”

In his first year as the starting cornerback in 1978, Britt notched 49 tackles and picked off two passes. His sophomore year was marked by injury, as Britt missed four games with a broken left hand. He still managed 36 tackles and was awarded Academic All-SEC honors.

As a junior in 1980, Britt snagged a pair of interceptions and made 66 tackles, and for the second-consecutive season, he was named to the Academic All-SEC team. In that season, Britt emerged as a leader on defense and was named co-captain prior to his senior season in 1981. Britt was also a 1981 preseason All-American selection.

The summer of 1981 held a lot of distinction for Britt with national recognition and new leadership roles. The summer also afforded him another opportunity to excel academically as Britt worked as a junior accountant with the Baton Rouge firm of Gallent, Ourso, McFadden, Salins and Tull.

“I dig working with tax returns,” Britt told the Baton Rouge Advocate in 1981. “I have a dual major: football and accounting, and not necessarily in that order.”

Poised to have a breakout senior season and graduate with a 3.5 GPA, all systems were go for Britt. However, in the second game of the 1981 season, the injury bug struck Britt again, as the senior broke his arm against Notre Dame and was forced to miss the rest of the season.

The injury could’ve been called a blessing in disguise for Britt, who was awarded a medical redshirt. The Tigers finished 3-7-1 without Britt in the backfield. The 1982 season would provide the opportunity for Britt to go out on top, both on the field and in the classroom, as the senior was three hours short of graduating.

The script couldn’t have been written any better for Britt. The fifth-year senior made 53 tackles and hauled in four interceptions en route to being named 1st team All-SEC and National Editorial Alliance first-team All-American. After helping the Tigers to an 8-4 record and a trip to the Orange Bowl, he was selected by the Atlanta Falcons in the second round of the 1983 NFL Draft and enjoyed a five-year career there before retiring in 1987.

“I still don’t know if I’m entirely comfortable with it because there are so many exceptional athletes that have come through LSU,” Britt admitted. “To think of my name amongst that group is such an honor. The whole experience is pretty surreal, and it’s quite an honor.”

James Britt epitomized what it meant to be an LSU student-athlete, and his academic and athletic legacy will forever be in the LSU Athletic Hall of Fame.