Golfer Lidback Finds Home at LSU, Then Hall of Fame 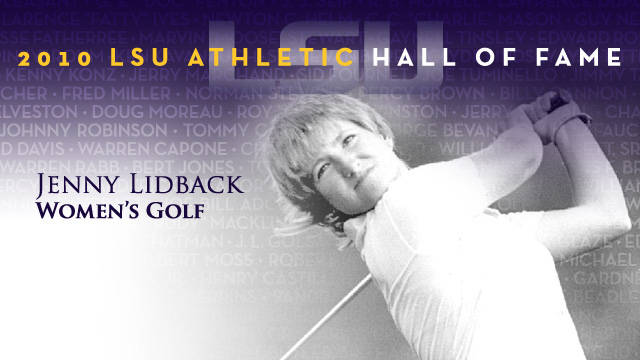 By Kent Lowe and Ryan Ginn

Jenny Lidback didn’t really have a desire to play golf when she transferred to LSU after leading TCU to the NCAA Division I Women’s Golf Championship.

Her decision to finally pick up the clubs again would lead to one of the greatest single seasons in women’s college golf, a major professional golf title and on April 24 at the Pete Maravich Assembly Center it will lead Lidback into the LSU Athletic Hall of Fame as the first inductee from the 31-year-old LSU women’s golf program.

“Since I found out (about my induction), which was in the beginning of December, I’ve kind of been thinking of my speech, and it’s like I can’t even find the words to tell the audience what it means,” Lidback said in a phone interview from her home in Atlanta. “The best way to say it, I think, is that it’s a total dream come true. It’s an incredible blessing. I’m not one to share a lot of my success. Whether in golf or anything else, I just kind of keep it to my family. But you have no idea how many people I’ve told in Atlanta that I’m getting inducted into the LSU Hall of Fame. I’m so proud to be in the hall of fame of this university. It’s just really and truly a dream come true.”

“It couldn’t be a better representative for women’s golf,” said current LSU women’s golf coach Karen Bahnsen, who coached Lidback in 1986. “She won seven individual titles and we won five as a team. It really was a lot of fun. It was a great team, but they were great people. She comes from a great family and they were so supportive of everything we did.”

That Lidback even got involved in golf is a story unto itself considering she was born in Peru, a place that was a not a golfing hotbed.

“I was born in Peru, and golf is not very big over there,” she recalled. “Both my parents played golf, so I kind of grew up around it and that’s what we did on the weekend. Then we moved to Brazil and it was the same thing. Every weekend, to get out of the city, we played golf and I got hooked on the sport.”

She proved to be very good at the sport, and once in the States was contending and winning in the major junior tournaments.  Lidback was runner-up in the 1978 USGA Junior Girls Championship and in 1981 achieved a junior golf Grand Slam winning the Future Legends, the Tournament of Champions and the All-American Junior Classic. All those wins would earn her the Golf Digest title of Junior Player of the Year.

TCU gave Lidback a golf scholarship and her talent shown, leading the Texas university to the 1983 NCAA Championship. But after two and a half years, Lidback wasn’t happy with the situation there and decided to transfer to LSU. However, golf was the furthest thing from her mind.

“(Transferring to LSU) was probably one of the best decisions I’ve ever made in my life,” Lidback recalled.  It was the greatest thing because when I moved to Baton Rouge and went to LSU, I wanted nothing to do with golf. I was just a regular student and didn’t touch a club for a while. Little by little, I started practicing with the team and (Coach) Karen Bahnsen. By the time my senior year came around (1985-86), I played for the team and I was back to enjoying golf again. I had thought, ‘you know, maybe I won’t do this for my career’ but my last year at LSU totally turned things around.”

What happened in that last year was one of the greatest single seasons in college golf. Remember this was the 1985-86 season when in so many ways, NCAA college golf was still in its infancy. Lidback posted a season college golfers are envious of to this day.

Lidback would win seven individual titles including the LSU-Fairwood Invitational title and would help the Lady Tigers win five team championships in 1985-86, the most team titles in a single year in program history. Her seven individual titles that all came in one season still ranks as the best for a career by a player at LSU. She led the Lady Tigers to a ninth-place finish in the Division I Championships, was named the national player of the year.

“I don’t know what it was,” Lidback said of her success. “I think I was just so miserable at TCU and then came to LSU and was so happy, it was almost like I couldn’t do anything wrong. I was so happy to be on the golf course. I was happy with who I was with and who my teammates were. It was just an effect that went right into my golf game and I played incredibly.”

“I think LSU was good for her,” said Bahnsen. “She enjoyed it. Having a player of that caliber was important for our program.  We want our players to grow as young ladies and I think that is what Jenny did.  We played a lot of junior golf together. She used to travel with her mom and I used to travel with my mom so we were friends. It ended up a little bit of a different relationship with me being her coach, but it was a good one. It was a lot of fun.”

“One tough thing was that by having such a great senior year, I thought, ‘This is what I’m going to do on tour, also. The transition from college or amateur to pro is really quite different,” Lidback, who earned almost $1.8 million on the LPGA tour, said. “On tour, I used to play anywhere from four to six weeks in a row, and I used to play a lot of Monday pro-ams. One year, I went 42 days without a day off. That was a big thing. I think it was my third year on tour and I was just tired. I did take a little time off that year and got rejuvenated. You just don’t realize how much golf you play on tour.”

Lidback is one of two former LSU players to win a major title, but the only one to win a professional major. Her time came in 1995 in what was the Canadian Open, known as the du Maurier Classic, recognized at that time before the Women’s British Open, as one of the LPGA majors.

“I was working on some things in my swing and I was so in tune to getting my game better,” she said. “I was looking more into the future and not just that week that I think it just helped me. One day I shot two-under and the next day it just kind of snowballed and I ended up winning the tournament. The greatest thing about winning that tournament was that my parents were there and one of my nephews was there. My parents probably came to one tournament a year and the fact that they picked that one and I won it was the biggest gift of winning a tournament.”

Her caddy that day wore an LSU cap and Karen Bahnsen and many of Lidback’s teammates were watching her calmly walk the fairways holding on to a tenuous one shot lead.

“It was huge. An LSU player had won a professional major,” said Bahnsen. “For her to do that, we were all so proud of her and for her.”

Lidback, who became a United States citizen in 2003 gave LSU a season to remember in women’s college golf and brought LSU national prominence with her win in an LPGA major tournament. For that, the 1986 graduate in broadcast journalism at LSU joins an elite group of student-athletes in the LSU Athletic Hall of Fame.