Women's Golf to Tee Off at SEC's 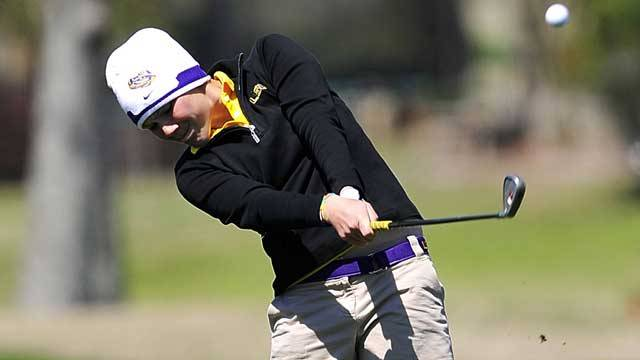 TUSCALOOSA, Ala. – The Lady Tigers of LSU got their first look at the NorthRiver Yacht Club golf course here Thursday in the practice round for Friday’s first round of the Southeastern Conference Women’s Golf Championship and the 17th-ranked Tigers are hopeful the good shots they made approaching the green carry over to the competition.

The Tigers did seem to be ready to go on Thursday motoring through their practice round over the par 71 course that will play just under 6,000 yards with good accuracy approaching what will obviously be some difficult greens depending on pin placement. LSU was fifth in last year’s tournament and looks to find a way to get the title back to Baton Rouge since its only visit in 1992.

All 12 teams will take part in the event and it is expected to be battle for the winner on Sunday as seven teams are ranked in the top 20 in the Golfstat performance rankings.

Ironically, the first round pairings are based on last year’s finish so the fourth through sixth place finishers will play together Friday beginning in the first wave at 8:30 a.m. and that happens to be the three teams jumbled together in the rankings – Georgia, Tennessee and LSU.

“The girls seemed to get a feel for the course on Thursday and I liked their energy level for the majority of the round,” said LSU Coach Karen Bahnsen. “Now it has to translate to Friday when we begin playing for real. I will be a really good tournament. Our conference for women’s golf is like every other sport in terms of competitiveness. Really it’s anyone game and whoever is on this weekend. Our team is excited about playing this time of year.

“The Yacht Club isn’t particularly long, but it can be challenging. It has a lot of undulations, up and downs, uphill lies and lots of elevation on the course.”

LSU’s lineup will have Baton Rouge sophomore Tessa Teachman in the one spot for the opening round, followed by 2009 All-SEC and second-team All-American junior Megan McChrystal. Teachman is ranked seventh in SEC stroke average entering the tournament, while McChrystal is ranked eighth. Sophomore Jacqueline Hedwall and sophomore Amalie Valle will be joined by freshman Mary Michael Maggio who will make her second start after November shoulder surgery.

The 54-hole event is scheduled for 18-holes each day starting at 8:30 a.m. Updates during the round can be found at LSU Women’s Golf on Facebook and @LSUwomensgolf on twitter. Live scoring is available at LSUsports.net through Golfstat.com.