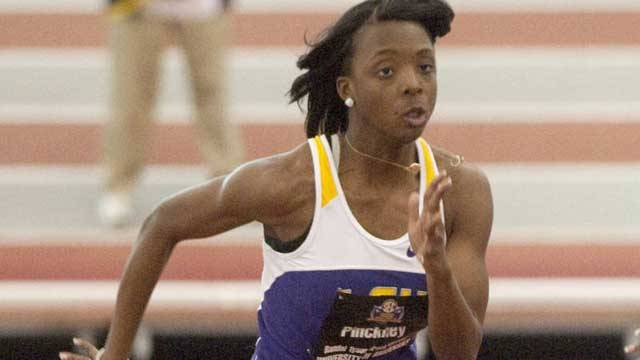 BATON ROUGE – For her outstanding performance at the Miami Elite Invitational on Saturday, LSU freshman sprinter Takeia Pinckney has been named the Southeastern Conference Female Freshman of the Week for the second time this season with the release of the league’s weekly awards on Tuesday.

Pinckney was also named the SEC Female Freshman of the Week once during the 2010 indoor campaign with her selection from the league office on Feb. 9.

The Tigers and Lady Tigers have been a staple in the voting for SEC weekly awards as they have earned a total of seven SEC Athlete of the Week honors between the indoor and outdoor campaigns in 2010.

After earning NCAA Indoor All-America honors in the 60-meter dash during the indoor season, Pinckney established herself as a true All-America contender in three events outdoors with her performance Saturday afternoon at the Miami Elite Invitational at the University of Miami.

She opened the day by running the third leg on the Lady Tigers’ 4×100-meter relay team that recorded the No. 1-ranked time in the SEC and the No. 2-ranked time in the NCAA this season. She teamed with Henry, freshman Kimberlyn Duncan and senior Kristina Davis to finish runner-up in the race with a 2010 seasonal-best time of 43.37 seconds. LSU was the fastest collegiate team at the meet.

Pinckney followed her performance in the 4×100-meter relay by shattering her own personal record in the 100-meter dash with a wind-legal time of 11.38 that was second among collegiate athletes in the race. She lowered her PR with the No. 8 wind-legal time and No. 12 time under all conditions in the nation in 2010.

Pinckney then wrapped up the Miami Elite Invitational by making her outdoor debut in the 200 meters, in which she recorded a wind-aided time of 23.34 to finish second among collegiate athletes in the meet. Her time of 23.34 is currently the No. 10-ranked performance in the NCAA under all conditions.

While Pinckney ranks No. 1 in the SEC this outdoor season in the 4×100 relay, she also ranks No. 2 in the 200-meter dash and No. 4 in the 100-meter dash under all conditions in the league this spring.