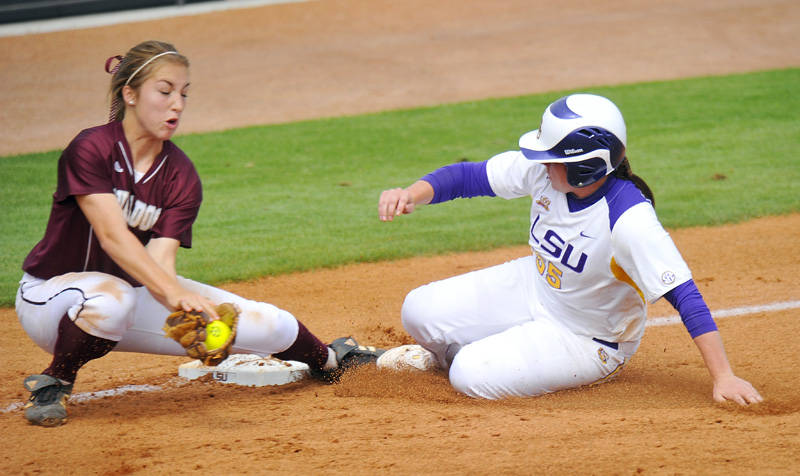 Rachel Mitchell, RF, Sr., LaPorte, Texas
Mitchell posted hits in four of five games, including all three games of LSU’s sweep over Mississippi State. Mitchell batted .462 with one home run and five RBIs. She also drew five walks en route to a .611 on-base percentage. The LaPorte, Texas product opened her week by driving home all three runs of LSU’s 4-3 game two setback at Alabama. Her two-run homer gave the Tigers a 3-1 edge. She also added a pair of RBIs during the series against Mississippi State.

Cody Trahan, P, Sr., Little Cypress, Texas
Trahan compiled a 1-1 mark on the week and rebounded from a tough-luck loss at No. 6 Alabama where she held the high-powered Crimson Tide offense without a run for the game’s first five innings. She fired seven innings of two-hit ball and surrendered one run against Mississippi State. She retired 17 consecutive batters at one stretch as the league’s ERA leader finished with seven strikeouts against one walk to improve to 9-2 on the season.

Rachele Fico, P, Fr., Oxford, Conn.
Fico put a rough relief outing at No. 6 Alabama in the rear view mirror and returned to form against Mississippi State. With runners on the corners and one out, Fico needed only one pitch to entice a double play ball to secure an 8-3 game two triumph. She picked up her staff-leading 12th win of the season after tossing a complete game where she was touched up for an unearned run on four hits during the MSU series finale.

Notes on the Tigers
LSU bounced back from a pair of Wednesday setbacks at No. 6 Alabama with a weekend sweep of Mississippi State at Tiger Park. The Tigers have now won 22 consecutive games at home dating back to February 20 and moved to within one game of the Crimson Tide for first place in the SEC Western Division. With the score tied at 1-1 during the seventh inning of the series opener against the Bulldogs, Morgan Russell provided the late-inning heroics with a RBI-single to hand LSU a 2-1 walk-off win. The Tigers also received a stellar pitching performance from Cody Trahan, who limited MSU to a run on two hits. She also recorded seven strikeouts. Ashley Langoni and Anissa Young combined for a 4-for-7 effort with five RBIs to fuel LSU to an 8-3 triumph in the middle game of the series. The Tigers broke open a 2-2 game with four runs in the fifth highlighted by a Young two-run double followed by a pair of runs during the sixth inning. Brittany Mack sprayed three runs on 12 hits to earn the win the circle. LSU picked up a 6-1 win on Sunday to secure its fifth straight series sweep of Mississippi State. Down 1-0 in the second inning, the Tigers used RBI-hits from Jessica Mouse, Rachel Mitchell and Kirsten Shortridge to grab a 3-1 lead. Rachele Fico tossed a complete game and surrendered an unearned run on four hits. LSU heads to Nicholls State on Wednesday before welcoming Arkansas to Tiger Park for senior weekend.