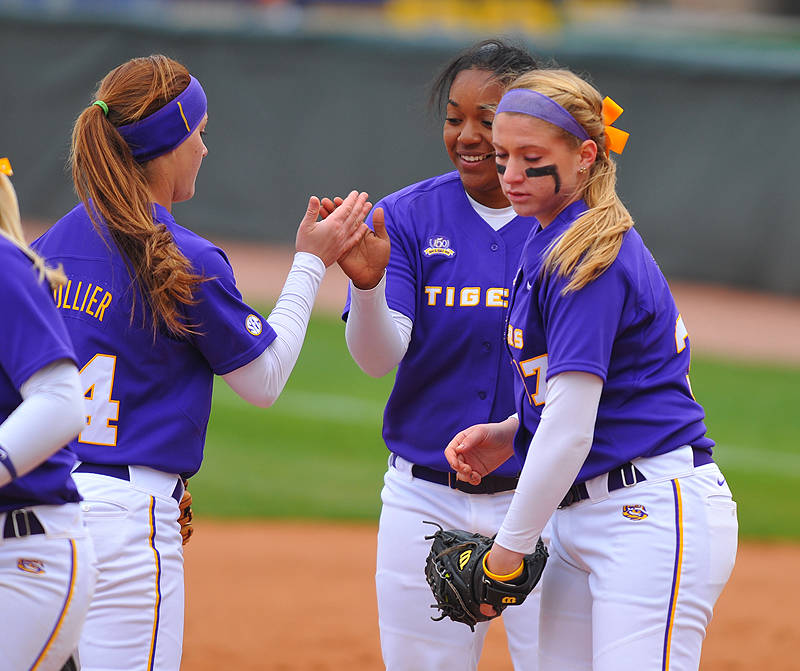 BATON ROUGE – The No. 14 LSU softball team looks to get back on the winning track during a weekend series against Mississippi State at Tiger Park. Both Saturday’s doubleheader and Sunday’s single game are scheduled for a 1 p.m. start.

LSU (29-9, 8-5 SEC) plays host to Family Weekend as the Tigers will honor their families in between games of Saturday’s doubleheader.

The Tigers are eager to end a five-game skid after falling to No. 6 Florida and No. 6 Alabama, a pair of 2008 & 2009 Women’s College World Series squads, on the road. LSU also is raring to break out of a.130 hitting clip and put behind a 1-for-25 skid in RBI situations during the five-game stretch.

“The players always tend to get over losses a lot faster than the coaching staff,” head coach Yvette Girouard said. “That’s a good thing because you have to a short-term memory in this game. I thought the players got back to basics and were ready to work in the cages at yesterday’s practice. We worked extremely hard on making solid contact and having strong barrels on our swings. To me, that was the biggest difference between our team versus Florida and Alabama.”

Kirsten Shortridge, one of 25 finalists for the USA Softball Player of the Year award, has hit safely in 13 of her last 16 games to check in with a .421 batting average. She also has posted 33 stolen bases, scored 33 runs and has tallied 19 RBIs from the leadoff spot.

Ashley Applegate and Anissa Young are looking to bust out of a pair of 0-for-14 stretches during their last five outings. Applegate has still reached base in 33 of 38 games on the season and carries a .296 hitting clip in addition to a team-best 20 walks. It marks the first time since the Virginia game back on February 17 that Applegate enters the game with below a .300 average.

Young shares the team lead with Rachel Mitchell and has produced 28 RBIs on five home runs. She also has cranked a team-high 10 doubles, while Mitchell has contributed five multi-hit efforts in her last nine games to boost her average to .348 for the season. She recorded all three of the Tiger RBIs during the game two at Alabama highlighted by a two-run homer during the sixth inning.

Courtney Hollier and Jessica Mouse have chipped in 18 and 17 RBIs, respectively. Ashley Langoni and Juliana Santos continue to make strides after returning to the field at McNeese on March 31. Langoni has reached base in five of six games and belted a team-best seven long balls.

Morgan Russell has picked up her play and gone 12-for-32 with eight RBIs during her last 17 outings. Tiffany Shaw provides a spark off the bench and has crossed the plate in 13 of 20 pinch running attempts. She also has swiped 10 stolen bases.

LSU’s defense and pitching staff continues to be phenomenal as the Tigers headline the SEC in both categories. The Tigers have committed only one error over their last nine games to surge into a .977 fielding percentage.

Cody Trahan, Brittany Mack and Rachele Fico continue to anchor the staff that has already tossed 14 shutouts en route to the SEC’s lowest ERA at a 1.23 ratio. All three also are ranked among the SEC’s Top 5 in ERA and Top 8 in opponent batting average.

Trahan sports an 8-2 mark on a 0.99 ERA and is coming off a pair of tough-luck losses where she limited the potent offenses of Florida and Alabama to a combined five runs over 12 innings. She has allowed only 50 hits and notched 75 strikeouts against 11 walks over her 71 frames of work.

Mack is 7-2 with a staff-best 0.96 ERA. She was handed a no-decision after limiting the Crimson Tide to one run on two hits during her four innings of work. The Round Rock, Texas native has picked up victories over South Carolina and Auburn during her only SEC decisions.

Fico has racked up a staff-high 98 strikeouts to jump out to an 11-4 start to go along with three saves. She recently had a stretch of 26.0 straight scoreless innings come to close at No. 6 Florida. Fico and Trahan have garnered 3-2 records in league play.

Mississippi State (22-18, 3-9 SEC) have posted back-to-back wins and are led by Chelsea Bramlett, who ranks second in the SEC with a .504 batting average. She also leads the SEC with a perfect 48-for-48 mark in stolen bases. Ka’ili Smith fuels the Bulldogs with nine home runs and 44 RBIs on a .367 average, while Misty Flesher and Kylie Vry have posted 9-5 and 6-5 marks for MSU in the circle.

“Mississippi State is a very good offensive team, and we’re going to have to be ready to match their firepower,” Girouard said. “Chelsea Bramlett is an outstanding catcher and one of the fastest players out there that creates some havoc on the bases.”

All three games of the series will be broadcasted live on ESPN 104.5 and The X 104.9 FM in the Baton Rouge area with Patrick Wright and Kent Lowe set to call the action. Live video and live stats also are available in the Geaux Zone on LSUsports.net along with in-game updates via www.twitter.com/lsu_softball.

Fans have the opportunity to play “Bingo on the Berm” during Saturday’s doubleheader for special LSU softball prize packs, while Sunday’s game features an All-State License Plate Holder giveaway to the first 500 fans.

After Saturday’s games, the Tigers will welcome Mike Kids Club members for a special “Screen on the Green” showing of the film “Up” on the Tiger Park Video Board.