Toms Shoots 3-Under in Masters First Round 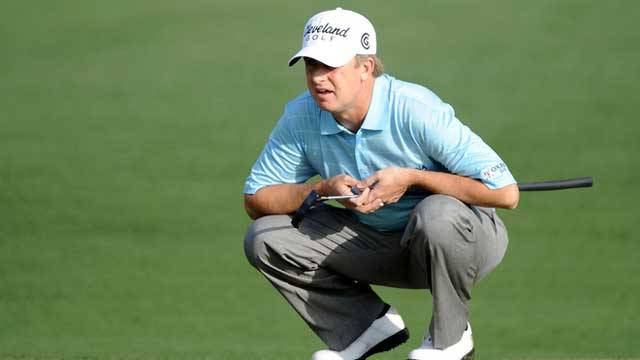 AUGUSTA, Ga. — Former LSU All-American David Toms shot 3-under-par 69 and led the Masters when he finished his first round on Thursday at Augusta National.

Live video and results are available at www.masters.com.

In his post-round press conference, Toms indicated that he plans to hold off on having shoulder surgery that would cause him to miss up to six months of action.

Below is the transcript:

THE MODERATOR: David, thank you for coming down. David Toms is playing in his 12th Masters, former winner of the US PGA Championship, played in a number of Ryder Cups, and this is his 12th Masters. It’s great to have David come down. David shot a 3 under 69 in the first round.

Any questions for David?

Q. Starting off, I think I had you about six lips in the first seven holes; how much does experience carry you through that, and obviously they started falling?
DAVID TOMS: I just told myself to be patient, because you can mess up pretty quick trying to be too aggressive, whether it’s with your putting or whether it’s your iron shots into the green. So I just stayed patient.
You know, all of a sudden I made a couple, hit a couple good shots, and boom, I’m under par. And from there, I obviously had some birdie holes to play on the back nine, and I started to drive the ball better than I was early in the round, and, it was just a good, solid day where I managed my game well. I wasn’t too aggressive, and when I did hit a bad shot, not that I recovered, physically, but I recovered with a good mental frame of mind and just made the best of it.

Q. The back nine has been kind to you in the past, particularly, 1998, when you shot a 29 and set a record. What is it about the back nine that kind of suits your game?
DAVID TOMS: I don’t know that it’s anything other than just being excited to be out there. You know, whether you’re playing this tournament for a long time or you’re watching it your whole life, just seems like you get settled into the shots. The thing is, is they can go either way. You can hit a good shot that turns out bad. My caddie and I talked about that on 15 today. I hit 4-iron and I was going for the green in two and had a tough pin over there, front right, with all of the water and I said, you know, what do you think?
He says, “You have a good yardage, let’s go ahead and do it.” But once you hit the shot, even if you hit it perfect, you still don’t know what’s going to happen. I was lucky enough that I caught the wind just right and I hit a good shot.

Q. You look at the leaderboard and yourself, Tom Watson, Bernhard Langer was up there until a couple of late bogeys, Cabrera is over 40, Ernie is 40; is this a day when the wind swirling around and everything experience really does make a difference?
DAVID TOMS: No, I think it’s the fact that we all teed off this morning. (Laughter).
Obviously experience is a big deal. I was on the front nine and I was lipping out putts and Bernhard was ahead of me making them and was 3-under par early. Obviously it can be done but you just have to go out there and hit it in the right spot and have uphill putts all day. But obviously, experience is a big deal here.

Q. What about the wind?
DAVID TOMS:  It’s still a guessing game. I think that maybe you’ve seen this direction before and you see a flag that’s going left-to-right and the wind is right-to-left. I hit a shot on No. 5 today from the middle of the fairway. I was trying to kind of hold a 6-iron to the back pin and I hit a shot and it literally — the wind got it hooked 30 yards. I was back in a spot I’ve never even been before back down the hill on the left.
So those things happen and you just have to walk up there and hit the next shot. I think that’s when the experience comes in where you don’t get frustrated and know you’re going to get some bad breaks, but there are birdie holes out there if you can hit the shot.

Q. Is the shoulder surgery you’re going to have after the Masters affecting you at all?
DAVID TOMS: I’m going to try not to have it to be honest with you. I had an injection on Friday and it feels a little bit better, and I’m just going to keep playing through it as long as I can.
It’s not the ideal situation from a pain and strength standpoint. But I would hate to have to hang up my golf clubs at this point in the year when I’m exempt for all of the majors and a lot of the tournaments I like to play in May and June, so for now I’m going to put it off.

Q. How does it affect you? Does it affect your game now?
DAVID TOMS: I would say it affects my power, my swing a little bit. I know that I’ve been doing some things in my swing that I would hopefully wouldn’t do if I was totally healthy.
I’m still able to practice and get through it. You know, the toughest thing is try to get comfortable at night to sleep.

Q. Which shoulder?
DAVID TOMS: It’s right. I have a rotator cuff impingement, they call it.  For now I’m just going to do the best I can to get through it.

Q. How long have you had it?
DAVID TOMS: Started October, last fall. So I don’t know any specific event other than I turned 43 in January, so, maybe that has something to do with it. (Laughing).

Q. Can we get some clubs on a couple of the birdies?
DAVID TOMS: On 9 I hit a 7-iron. I actually was trying to hit it just right of the pin, and pulled it a little bit and hit it in the fringe just perfect, got it down there, one of the closest shots you’ll see all day because it’s a tough pin. Hit it pretty close, within four feet.
12, I hit another 7-iron, only had 150 today but was trying to keep it down out of the wind. It was perfect. Hit it 12 feet or so.
16, I hit an 8 fairly close underneath the hole where you have to have it.
18, I drove it in the fairway bunker and I hit it short right of the green. You know, I was torn in between trying to flop it and trying to bump it into the hill, and I didn’t commit to it. So I bumped it, but I flew it on the green, so it went about 15 feet by. And I hit a great putt, I thought I made it but it just didn’t break.

Q. How much affect do the grooves have as far as flopping shots?
DAVID TOMS: I’ve noticed this week, especially early in the mornings when the rye has dew on it when they water it at night, it’s much more difficult to spin the ball with shorter shots so you might see some guys laying back, especially a hole like No. 3.
This morning, I had a downwind shot from 70 yards I think and I hit what I thought was a pretty good shot, landed ten feet short and went all the way over the green with a 60-degree wedge.
The chipping before with the grooves we had, when you have into the grain, a lot of times you would see guys kind of hood it. Now maybe guys are not using as much loft. I know I’m not. I’ve gone to more of a 58. Still, you’re not able to hit that check shot as much around the greens.

Q. If you were to have surgery, how long would you be out?
DAVID TOMS: The best in the business told me six months on Friday. Like I said, I’m trying not to even go there with that. I’m going to play golf and hopefully play well and cross that bridge when I get to it.

THE MODERATOR: David, thank you very much. Good luck the rest of the way.