No. 14 Softball Looks to Bounce Back at Alabama 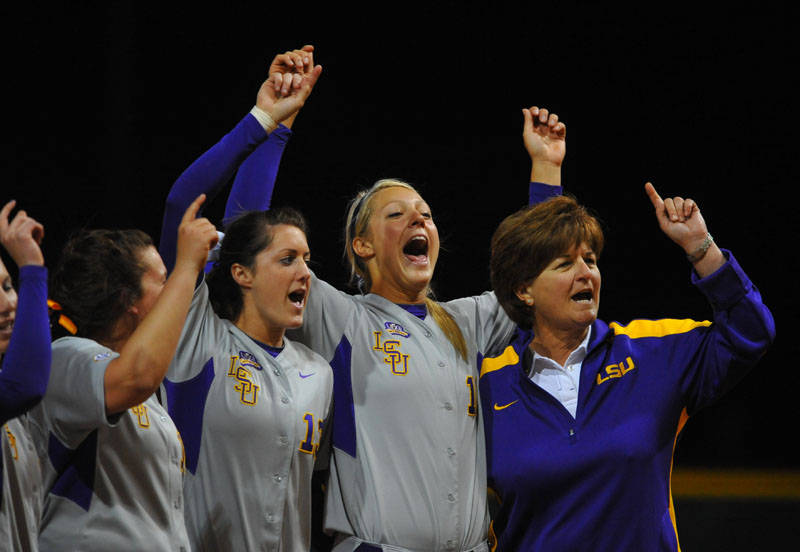 TUSCALOOSA, Ala. – The No. 14 LSU softball team wraps up a seven-game road swing with a Wednesday twin bill at No. 6 Alabama. First pitch against the Crimson Tide is slated for 5 p.m.

“We had a great team meeting [Monday night] and want to get back to basics,” head coach Yvette Girouard said. “We talked about dealing with the different peaks and valleys of a season. I think we went into Florida on such a high peak and started to press when things didn’t go our way immediately.”

Kirsten Shortridge paces the Tigers in a trio of offensive categories with a .433 hitting clip on 55 hits and swiped 32 stolen bases. She also a 3-1 mark with a 1.99 ERA in the circle.

Rachel Mitchell and Ashley Applegate have notched a .346 and .314 average, respectively. Mitchell has cranked three homers and is second on the squad with 25 RBIs, while Applegate has reached base in 34 of 36 games en route to a team-best 20 walks on a .457 on-base percentage.

Anissa Young has ripped a team-high 15 extra base hits aided by 10 doubles and five home runs. Her 27 RBIs also headline the team.

Ashley Langoni opened the Florida series with her first homer since the Syracuse game on March 5 after missing a 10-game stretch at the start of SEC play. 11 of her 17 RBIs have come on her team-best seven home runs.

Courtney Hollier and Jessica Mouse have chipped in 18 and 17 RBIs for the Tigers. The duo has picked up 19 of their 35 RBIs with two outs. Morgan Russell has added a hit in five of her last seven games where she has earned an at-bat.

LSU continues to be fueled in the circle by the three-headed attack of Cody Trahan, Rachele Fico and Brittany Mack, who rank among the SEC’s Top 4 in ERA. The trio also ranks inside the league’s Top 8 in opposing batting average.

“It’s a fine line at times and I felt as if we played not to lose instead of to win at Florida,” Girouard said. “I challenged them to have the mindset of a 10-year old to just go out there, have fun and play the game. They need to let their pure athletic talent take over and that’s what we need to do to be successful in a hostile environment.”

Alabama is led by Kayla Braud with a .500 batting average on 52 hits. She also has tallied 19 stolen bases to go along with two home runs and 22 RBIs from the top of the lineup. Charlotte Morgan paces the Tide and belted six of her team-best nine homers in addition to 23 of her team-leading 38 RBIs in conference play. Kelsi Dunne has racked up a 14-4 mark, a 2.46 ERA and 180 strikeouts over 111.0 innings of work.

“Charlotte Morgan is one of the best all-around players in the country and that’s a big reason why she was picked No. 1 in the pro draft,” Girouard said. “Kayla Braud also has done a great job for them at the top of their line-up and we heavily recruited Kelsi Dunne. We’ll have our work cut out for us. We’ll have to pitch tough and be selective at the plate.”

Both games of Wednesday’s doubleheader will be broadcasted live on ESPN 104.5 and The X 104.9 FM in the Baton Rouge area. Live stats also will be available on LSUsports.com along with in-game updates via www.twitter.com/lsu_softball.