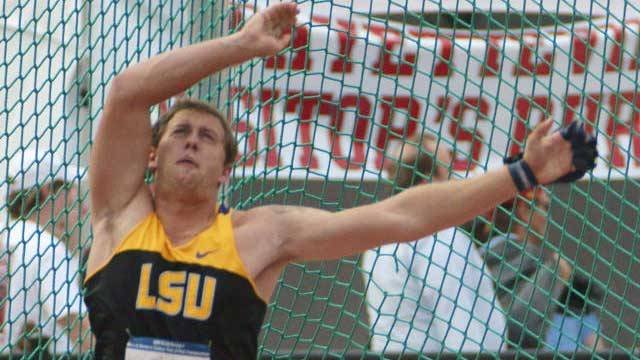 BATON ROUGE – LSU junior Walter Henning has been honored for his performance in his 2010 outdoor season debut at the 83rd Clyde Littlefield Texas Relays as he has been named the SEC Male Field Athlete of the Week for the third time during the 2010 campaign.

Henning also received the accolade from the SEC twice during the indoor season in consecutive weeks on Feb. 2 and Feb. 9, while he has been named the SEC Male Field Athlete of the Week five times during his two-year career at LSU. He earned one indoor and one outdoor honor as a sophomore in 2009.

Henning’s season-opening effort in the hammer throw on Thursday at the Texas Relays was a historic one as it marked the first time in the meet’s storied history that an LSU Tiger won the event crown.

In his outdoor debut, Henning set a new personal record and shattered his own LSU school record with an impressive throw of 236 feet, 1 inch on his second attempt of the competition. He set his previous PR and school record during the 2009 campaign with a seasonal-best mark of 235-11.

Henning was crowned hammer champion at the Texas Relays against an NCAA caliber field that featured four of the Top 10 hammer throwers in the NCAA top this point of the season, including No. 3-ranked Dimitrios Fylladitakis of UTEP (225-9), No. 5-ranked Adonson Shallow of Southeastern Louisiana (220-0), No. 6-ranked Trey Henderson of USC (219-9) and No. 10-ranked Michael Lauro of LSU (213-4).

Henning’s season-opening mark of 236-1 ranks him No. 1 in the SEC and No. 2 in the NCAA this spring. In fact, he is poised to defend his SEC crown in the event as he ranks No. 1 in the SEC by nearly 20 feet.

A native of Kings Park, N.Y., Henning has proven to be one of the more dominant throwers at the college level this season as he is perfect with seven wins in seven competitions in 2010. He is the reigning NCAA Indoor champion in the 35-pound weight throw after taking the title at the national meet on March 13.