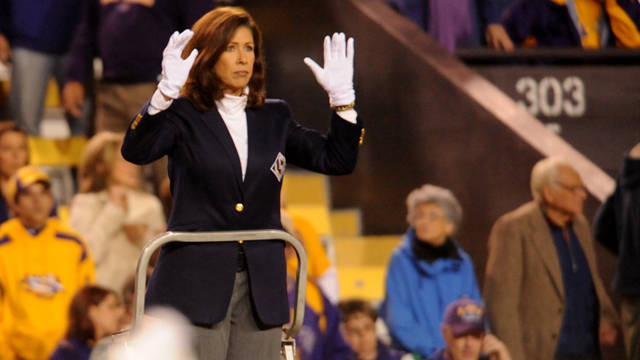 BATON ROUGE – The LSU College of Music & Dramatic Arts announced today that Associate Director of Bands Linda Moorhouse has been selected to be the new director of the LSU Tiger Marching Band.

“It is very exciting to announce that Linda Moorhouse will be the next director of Tiger Band,” said Laurence Kaptain, dean of the LSU College of Music & Dramatic Arts. “The Tiger faithful can be assured that the traditions of the marching band will be sustained. Linda has worked closely with Frank Wickes for almost 25 years, so this is a logical progression.”

Not only is Moorhouse the new director of Tiger Band, but she is also the first woman director in the history of the program, Kaptain said.

Kaptain noted that current Assistant Director of Bands Roy King will also continue to work with Moorhouse and be “a key member of the equation.”

Moorhouse will continue to serve as associate director of bands and as an assistant professor within the LSU College of Music & Dramatic Arts, Kaptain said. She has also served as co-director of Tiger Band and will take over full directorial duties from current Director of Bands Frank Wickes, who is retiring this year after 30 years of serving as director of bands at LSU.

“I could not be more pleased than to learn that Linda Moorhouse has been named director of the LSU Tiger Marching Band,” Wickes said. “She is the perfect choice and will continue to build on the many fine traditions she has already helped firmly establish. This is great for LSU.”

According to Kaptain, university band departments are organized differently than they were in the 1960s and ’70s, with the director of bands not being as directly involved with the marching program.

“Frank Wickes may be the last band director at a major university that was involved with the marching band on a regular basis,” Kaptain said. “We will follow the formula of UT-Austin, Michigan, Ohio State, Nebraska, Oklahoma and other great football institutions with doctoral music programs, where the director of bands conducts the indoor concert groups.”

“Dr. Moorhouse’s impeccable national reputation in both the musical and visual aspects of marching band has brought prestige to the LSU School of Music for more than two decades,” said Jane Cassidy, interim co-director of the LSU School of Music and associate dean of the LSU College of Music & Dramatic Arts. “Preserving tradition, while providing innovative halftime entertainment, are hallmarks of Tiger Band. These are due, in large part, to her creativity and visionary leadership. In addition, she is a respected member of the College of Music & Dramatic Arts wind conducting faculty.”

“We expect the band to continue to be one of the very best in the country, and Linda has been an integral component in the success of the program,” Alleva said. “I look forward to working with her in the future. The band is one of the windows to our campus and, much like in athletics, we must perform at the very highest level.”

Appointed to the LSU music faculty in 1985, Moorhouse has conducted the LSU Symphonic Winds and has served as co-director of the LSU Tiger Marching Band, where she serves as the primary instructor, also overseeing administrative activities in addition to drill and show design. In addition, Moorhouse teaches courses in undergraduate conducting and administers the LSU Summer Music Camps.

Moorhouse is a past recipient of LSU’s Tiger Athletic Foundation President’s Award, a campus-wide award for teaching excellence, in addition to the School of Music Excellence in Teaching Award. Outside LSU, she has been recognized by the John Philip Sousa Foundation with the Sudler Order of Merit, is a Member Laureate of Sigma Alpha Iota and has received the Silver Baton and Golden Rose awards from the Women Band Directors International. Honored by the National Band Association with the Citation of Excellence, she has received the Phi Beta Mu Outstanding Bandmaster Award for Louisiana and has been recognized by Who’s Who Among America’s Teachers. Her biography will be included in the upcoming edition of the New Grove Dictionary of American Music and the Grove Music Online edition.

Off campus, Moorhouse maintains an active schedule having appeared as a guest conductor, clinician and adjudicator throughout the United States, and in Japan, Western Europe and Canada. An elected member of the prestigious American Bandmasters Association, she serves as a past president and executive secretary-treasurer of the National Band Association. Moorhouse also serves on the Sudler Trophy Committee of the John Philip Sousa Foundation and is a member of CBDNA and Phi Beta Mu.

Moorhouse has served as a contributing author for five volumes of the “Teaching Music Through Performance in Band” series. She is also a contributing author for three books: “A Composer’s Insight – Thoughts, Analysis and Commentary on Contemporary Masterpieces for Wind Band” (Volumes 2 and 3) and “The Music Directors Cookbook.” In addition, she is editor of The NBA Journal, the official journal of the National Band Association.

The LSU Tiger Band is the largest and most visible single organization on campus, with a closed membership of 325 students. Recognized nationally for its outstanding achievements by the John Philip Sousa Foundation in 2002, the Tiger Band is comprised of students from all over the LSU campus. This is reflected in the fact that approximately 80 percent of Tiger Band members are majoring outside of music.

Tiger Band has been recognized nationally on numerous occasions in the last decade. In 2002, the LSU Tiger Band received the Sudler Trophy, which is referred to as “the Heisman Trophy of college marching bands,” for a distinguished history of marching and musical excellence. In 2008, the Tiger Band won the “Battle of the Bands” college marching band contest sponsored by ESPN, Lucasfilm and Paramount Pictures. In the fall of 2009, the LSU Tiger Band was inducted into the Louisiana Music Hall of Fame.