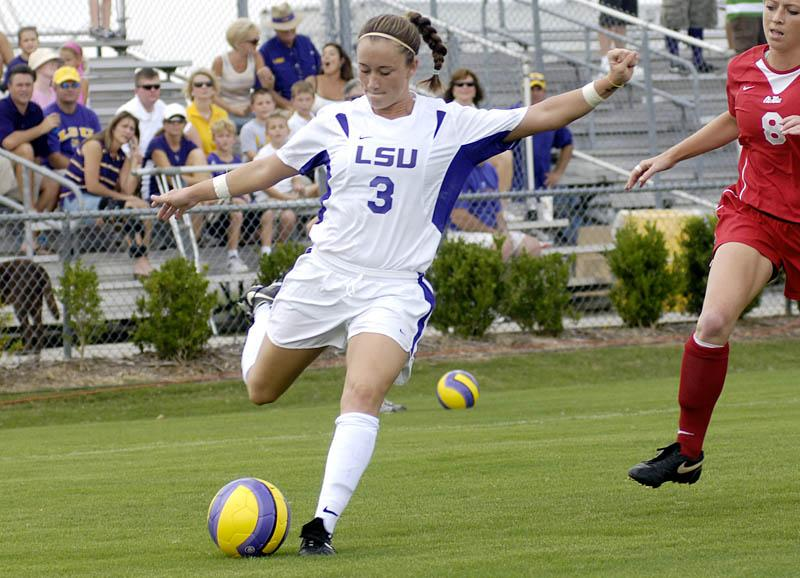 BATON ROUGE — LSU sophomore Malorie Rutledge is without a doubt one of the nation’s top midfielders at the collegiate level, and the Under-23 U.S. Women’s National Team agrees as she has been invited to participate in a team training camp beginning Thursday in Carson, Calif.

Rutledge is among 24 of the nation’s best U-23 soccer players invited to take part in the eight-day training camp, which will be held at the Home Depot Center in Carson through June 12.

The team’s first training session is scheduled for 4 p.m. on Thursday, while it will come together for four one-a-day and three two-a-day training sessions over the next eight days. It also has matches scheduled against such club teams as Cal South, the Ventura Fusion and the Pali Blues.

Rutledge and the rest of her teammates are also slated to attend a Major League Soccer match on Saturday as the Los Angeles Galaxy take on the Colorado Rapids at the Home Depot Center.

Rutledge has quickly developed into one of the more dynamic offensive talents in all of women’s college soccer while lining up as a member of LSU’s deep and talented midfield unit the last two seasons, and she is the first player in the program’s 13-year history to be invited to participate in a U.S. Women’s National Team training camp at this level.

“I’m really excited about the opportunity that I’ve been given, and I just hope to learn as much as I can while training with the best players in the country,” Rutledge said. “This will be a new experience for me and is a great opportunity to mature as both a player and person. This is a great way to go into our summer training program back at LSU.”

LSU head coach Brian Lee agrees that this can be a great learning experience for Rutledge as she continues to develop her skills against many of the elite players in women’s college soccer.

“We’ve witnessed Malorie’s development first-hand these last two seasons, and her improvement in our program has been tremendous,” Lee said. “This training camp is another great opportunity for her to mature as a player while competing against many of the top players at the collegiate level. Malorie is certainly deserving of this invitation, and we know she will represent LSU well.”

Rutledge burst onto the scene as a sophomore in 2007 as she was named an Honorable Mention All-American by Top Drawer Soccer following the season.

She set an LSU single-season record for assists with 12 while also scoring four goals for a total of 20 points in leading the Tigers to their first ever SEC Western Division championship and berth into the second round of the NCAA Tournament.

Rutledge became only the second Tiger to receive First-Team All-SEC recognition for her efforts on the pitch. She was also named a First-Team All-Central Region selection by both Soccer Buzz Magazine and the National Soccer Coaches Association of America following the season.