After Blowout, Team USA Falls to China in Title Game 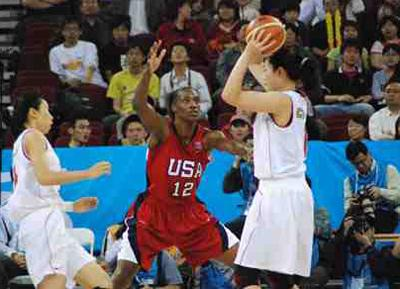 Although the team only managed to shoot 47 percent from the field, Fowles connected on 58 percent of her shots on 7-of-12 shooting in 23 minutes on the floor. Fowles also recorded USA’s only two blocked shots of the game.

In the game two days ago, Fowles helped lead the U.S. over China by pouring in 20 points and collecting 16 rebounds.

In six games in the tournament, Fowles averaged 17 ppg and 10.5 rpg to lead the U.S. in both categories.

How did this game differ from the first game against China?

“They came out with a lot more energy. Once they started clicking as a team it was hard for us to click on defense. That’s something that USA just doesn’t do. Once they started getting in their groove we weren’t able to get into our groove defensively and that put us into the hole.”

You were able to fight back and take the lead in the second half. Tell me about that run:

“That stretch, we worked so hard to get back but we didn’t work hard enough to maintain it. China just came back, did a lot of things that were unexpected. We didn’t crash the boards and we didn’t get back on a couple of plays where they got easy layups. It’s something that we could have controlled but mentally we just weren’t there.”

What can you learn from this?

If you have the opportunity to return to Beijing in August, will this serve as a little extra motivation for you?

“It’s going to leave a bitter taste in my mouth for a long time, even if I don’t get back here in August. I’ll be looking forward to it whenever I do make a (USA Basketball) team. I’m going to always remember China and it’s going to be different every time we play them because you never want to feel this way again. I’m looking forward to meeting up with them again.”