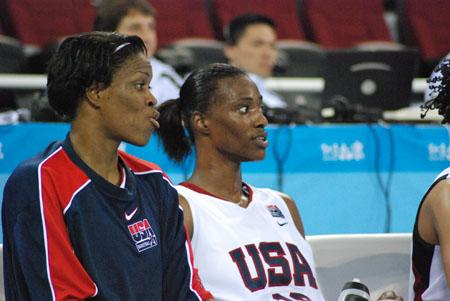 BEIJING — For the third consecutive game, former LSU great Sylvia Fowles led the USA Basketball Women’s National Team in scoring with 14 points in a 78-60 U.S. victory over New Zealand at the 2008 Good Luck Beijing Tournament in China on Wednesday.

Fowles also pulled down seven rebounds and blocked two shots in only 15 minutes of play for the U.S., which won its third-straight game to move to 3-1 in the tournament.

As a team, the U.S. only shot 38.5 percent from the floor, but Fowles shot 55.6 percent on 5-9 shooting from the field. The former All-American also finished 4-6 from the free throw line.

In the two games prior to Wednesday, Fowles recorded back-to-back double doubles. Against Cuba on Sunday, Fowles poured in 25 points and grabbed 18 rebounds for USA. Fowles followed that up on Monday with a 20-point, 10-rebound performance against South Korea.

Fowles and the U.S. team will wrap up preliminary play against undefeated China (4-0) on Thursday at 7 a.m. CDT.

NBA TV will air the USA-China game live and will also rebroadcast the game at 3 p.m. CDT as well.