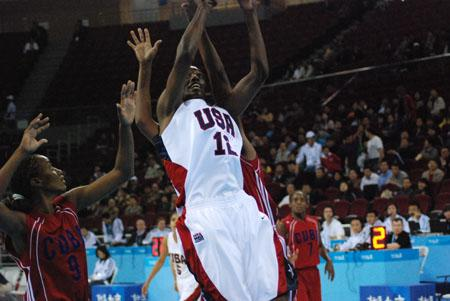 BEIJING, China — Led by a Herculean effort from Sylvia Fowles (Chicago Sky), who posted 25 points, 18 rebounds and six blocked shots, the 2007-08 USA Basketball Women’s National Team (1-1) bounced back from its disappointing first loss to earn a 92-60 victory over Cuba (1-1) on Sunday afternoon at the Wukesong Arena in the second game of the 2008 Good Luck Beijing Tournament in China.

“I’m really pleased with how we came out today, we started the game really well,” said USA head coach Anne Donovan. “It was our focus to start the game very strong and aggressive. We felt like we needed to come right at Cuba and attack them early and we executed that game plan very well.

“I think Sylvia was extra motivated today since she wasn’t on the floor very much yesterday due to foul trouble. She came out and had a monster game and Lisa (Leslie) came out and took a smaller role today. It’s nice to see the versatility of our players.”

“After our loss yesterday we kind of had a chip up on our shoulders because we didn’t do some things very well,” said Fowles. “We made it our business to come out here today and make sure we got off to the right start and get things flowing within our offense. Today I was more focused. I told myself to let the game come to me, don’t get into any silly foul trouble because my teammates need me. I thought about (yesterday’s game) a lot all night and I came out today and let the game come to me and performed to the best of my ability.”

The USA set the tone early, going up 9-0 from the outset, and continued to roll throughout the game. Shooting a blistering 6-of-6 in the first four minutes, while holding Cuba to just 1-of-7 during that span, by the end of the first quarter the U.S. was up 24-16. Fowles, who joked after the game that she was well rested since she sat most of the game against Australia due to foul trouble, was well on her way to a double-double with six points and seven caroms in the initial period.

The Americans went up by as many as 23 points, 47-24, before closing the books on the first half with a 48-31 advantage and never didn’t look back. The islanders never posed a serious threat in the second half as the U.S. was ahead 70-47 at the end of the third quarter and outscored Cuba 22-13 in the fourth.

Suchitel Avila led Cuba with 17 points, Yayma Boulet had 14 points and 10 rebounds, while Yakelyn Plutin rounded out her team’s double-digit scoring with 11 points.

“We knocked down some shots. I think (Candice) Wiggins got a couple looks, got a couple shots to go down to get her confidence going,” said Smith. “Lindsey (Harding) got one, Lisa (Leslie), everybody was moving the ball around. We were executing a little bit better so then we got some better looks. I’m excited to get on the floor again tomorrow and keep things rolling.”

NBA TV will televise live the USA’s game against China, as well as its final game on April 26, and will re-air both of those games at 4:00 p.m. (EDT) the afternoon of the games.

Donovan is being assisted on the sidelines by collegiate head coaches Gail Goestenkors of the University of Texas and Temple University’s Dawn Staley. USA assistant coach Mike Thibault (Connecticut Sun) aided in the team’s pre-Beijing training camp but was unable to join the team in China due to his WNBA coaching duties.