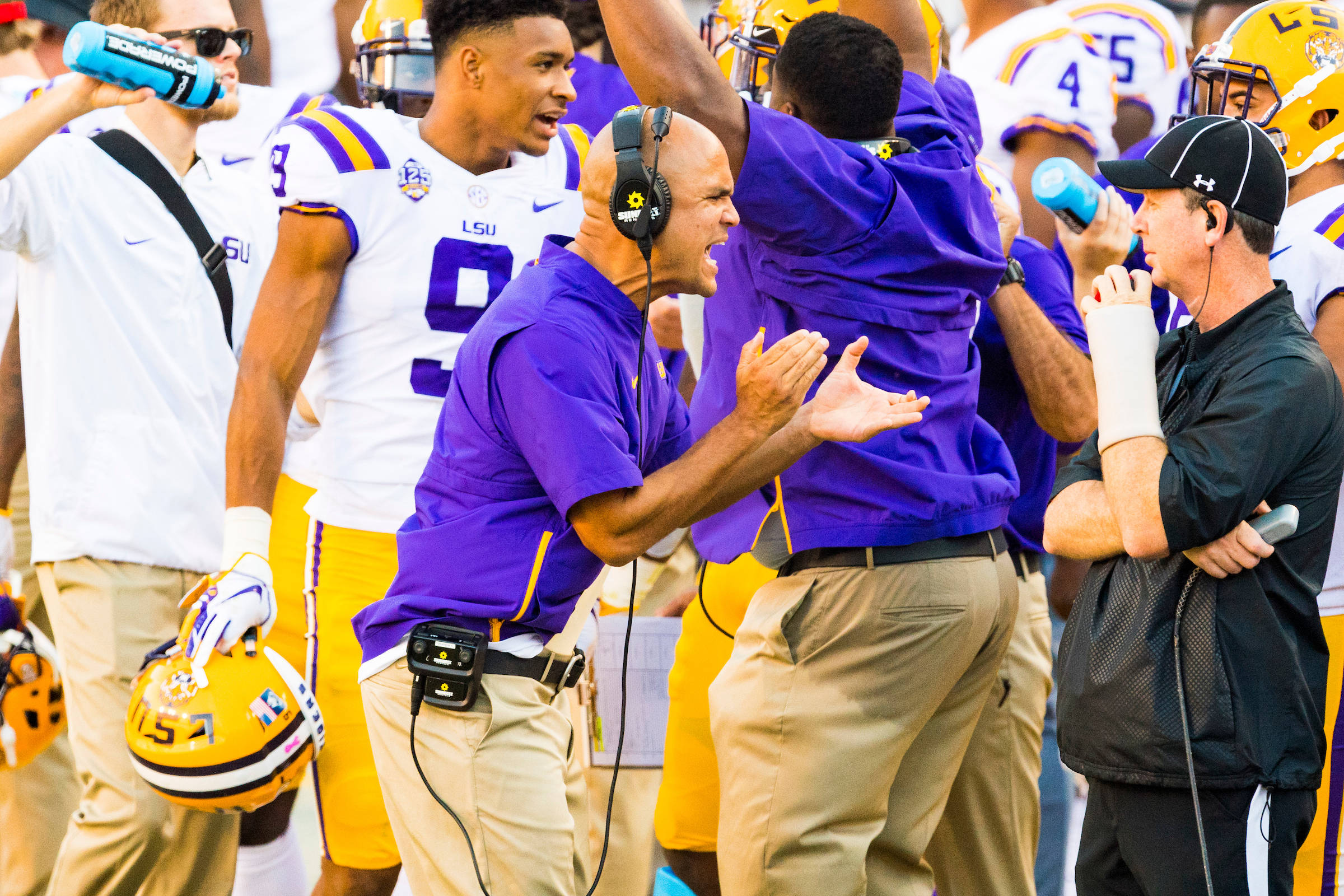 METAIRIE, La. – It’s a summer tradition a couple years in the making, now.

When defensive coordinator Dave Aranda meets with the media at the annual TAF Coaches Caravan, held Monday at the Walk-On’s in Metairie, the first thing he talks about is that coveted secret everyone’s been wondering about.

Which musicals has he seen (with his musical-loving daughter) this year?

Last year, it was “Hamilton.” This year’s selections: “Wicked” and “Mean Girls,” with a preference for the former.

It’s the rare topic Aranda strays from football to touch on, and the rest of the conversation was a deep dive into the Professor’s mad schemes for the season ahead.

Aranda is an open book, happy to talk shop with any who will listen, and Monday’s chat with reporters was especially rich.

Here are a few takeaways.

Some years, you have pawns, functional but limited.

Other years, your board is loaded with queens, who can go everywhere and do everything.

This season feels like a case of the latter for Aranda, who says one of the calling cards of the 2019 LSU defense is the number of protean players he has at his disposal.

Take Grant Delpit, for example. The unanimous All-American returns for his junior season after a sophomore campaign of unprecedented production. Since 2000, he’s the only player with a 5-sack, 5 interception season who has also forced and recovered a fumble. He can play deep safety or close to the line, and Aranda says he’ll utilize his versatile defender strategically in a number of spots.

Since 2000, the list of players with 5 sacks, 5 interceptions, and one forced fumble is short.

It’s @showtime9_ and nobody else. It’s why he’s a finalist for the @NagurskiTrophy. https://t.co/voA06Ubzl8 pic.twitter.com/qIPrsCCsdt

“The question always with Grant is he does everything well, and so I think it really comes down to when we are in run-defense mode, we want edges, stuff blown up in the interior and gaps filled where Grant can play alley-to-alley,” Aranda said. “And then when we’re expecting pass and it’s passing situations, there’s a lot of merit to Grant rushing. But if he isn’t rushing, there’s a lot of merit to having him in the middle of the field.”

Another versatile weapon is senior linebacker Michael Divinity, who thrived on the edge last year but moved inside this spring, to great effect. Divinity led SEC edge rushers with 30 hurries in 2019, but with Devin White departed for the NFL, Divinity’s emerged as a potential star in the middle.

“We’ve got him at inside linebacker now, and when we get to third down, he’ll play some on the line of scrimmage,” Aranda said. “Mike’s a smart kid, man. He gets football. He’s a great communicator. He’s confident. He is able to take charge and when things are going tough, he’s able to be tough. And so I appreciate that about him, and I think the guys have really responded to him well.”

Aranda noted that the change in LSU’s defense this spring was immediately noticeable when Divinity moved from the edge to the Mack linebacker spot.

“From one scrimmage when he wasn’t at the Mack until we moved him, and the very next couple of scrimmages, it was just a night and day difference from just the energy and how we responded to adversity,” Aranda said.

Without K’Lavon Chaisson coming off the edge last year (more on that later), Aranda had to get creative to build a pass rush.

So, he invented a new position in his defense, designed, at first, for Delpit: the Quarter (“a big Dime,” he explained).

The Quarter, Aranda said, “is a glorified linebacker,” a safety playing closer to the line of scrimmage. Delpit broke it in to great effect, but later in the season, it was JaCoby Stevens who proved himself a perfect fit at the Quarter.

In the final three games of the season, Stevens finished with 27 tackles, 5.5 tackles for loss, 0.5 sacks, and two PBUs, thriving in Aranda’s new position and allowing Delpit to move around in the secondary.

“It gives him the ability to play man-to-man on tight ends, to rush off the edge, and all of those things he does very well,” Aranda said. “JaCoby is very smart, very intelligent, understands football. He knows all of our adjustments. He knows the ins and outs of the defense. His ability to call out plays, pre-snap awareness, is very high. So having JaCoby on the field is an absolute plus for us.

“I think we’ll continue to build and highlight him and put him in spots where he can really excel.”

LSU will also add freshman Marcel Brooks into the mix at Quarter, giving them three options in the hybrid role. The hardest part for Aranda is figuring out how to get them all out there at the same time.

“It’s the abundance of safeties that are athletic, that can run and hit and cover and that have the instinct to play low,” Aranda said. It kind of started with Grant, and then JaCoby kind of came on and took a liking to it, and so I think both of those guys can play that position really well. We’re getting another one in Marcel, and so we’re continuing to add to that position.

“It tests the creativity to find ways where we can play with a lot of those guys at the same time.”

One aspect that particularly excites Aranda is the freedom he’ll be giving the defensive line this season.

In years past, the front has been responsible for a lot of the dirty work: eating blocks, filling gaps, and opening alleys for the linebackers and safeties to make plays in.

All of that is still on the table in 2019, but the return of veterans like Rashard Lawrence and Breiden Fehoko, plus some meat in the middle in tackles Apu Ika and Tyler Shelvin, will give Aranda some wiggle room to shake things up.

“Front-wise, we’re letting the front go more than what it’s done,” he said. “They’re on edges more. They’re attacking the line of scrimmage more. And so I’ve talked to Breiden Fehoko and Rashard Lawrence about that. They’ve asked for that for a while. And I know Coach O’s excited about that.”

Ika and Shelvin, meanwhile, will also be moved around more. In the past, Aranda has deployed what he calls his “tite” front featuring a nose guard lined up directly in front of the offense’s center. This year, as he started to do some last year, he’ll shift or “shade” that nose guard into the gap on either side of the center. That adjustment should create some one-on-one changes for the nose guard, which Aranda sees as beneficial after both players made waves in the spring.

“Now, we have a one-on-one right at the point of attack,” he said. “we can have that one-on-one and have that be one of our better players. That’s a positive for us. There’s exciting things that we can do. But it starts with that guy dominating, and we were able to see some of that in the spring. We can build on it.”

While Chaisson’s absence proved to be the necessity that mothered Aranda’s innovation, his return is mothering pure excitement for his defensive coordinator.

The biggest thing Chaisson will offer Aranda as a schemer is more margin for error.

“Without K’Lavon, we’d have to work really hard to get something just right,” Aranda said, “and maybe depending on the day or depending upon the width of that outside linebacker stunting inside, or maybe his footwork or his stance wasn’t just so and we have to try and get that right, we have to really be right on target to get where we want to get to.

“Whereas with K’Lavon, as long as he’s doing it, it’s probably going to be OK.”

The plan, Aranda said, is to use Chaisson as much as possible as a rusher, while limiting how much he has to drop into coverage. That said, Aranda would like to utilize Chaisson, too, in “pass to run” rushes. It’s a read of sorts, on Chaisson’s part, which allows him to be more aggressive in pursuing sack opportunities while staying mindful of the threat of the run.

“He has that ability, to be able to decipher that and make plays,” Aranda said. “K’Lavon’s very smart. He loves football. He’s obviously very talented. There’s a fair amount of quick twitch in him and explosiveness with him. He’s hooked up right. There’s things he just gets.”

The abundance of talent – and, specifically, versatile talent – makes Aranda’s life easier in some ways, but also more difficult in others. He admits that, entering his fourth year in a job for the first time in his career, there’s a lot of tape on him now, especially against SEC offenses.

His goal this year is to maintain the identity he’s built on defense in three seasons, while using the diverse skillsets of his defenders as inspiration for innovation.

“I look at this year’s group, whether it’s K’Lavon or it’s Mike Divinity or it’s JaCoby Stevens or it’s Grant Delpit, there’s a bunch of guys that do a lot of things individually really well,” he says. “And it’s our task to take those things and blend that into a defense. I think that’s the challenge in the offseason, is to try and find roles for all these guys and build it where it can be a collective group.