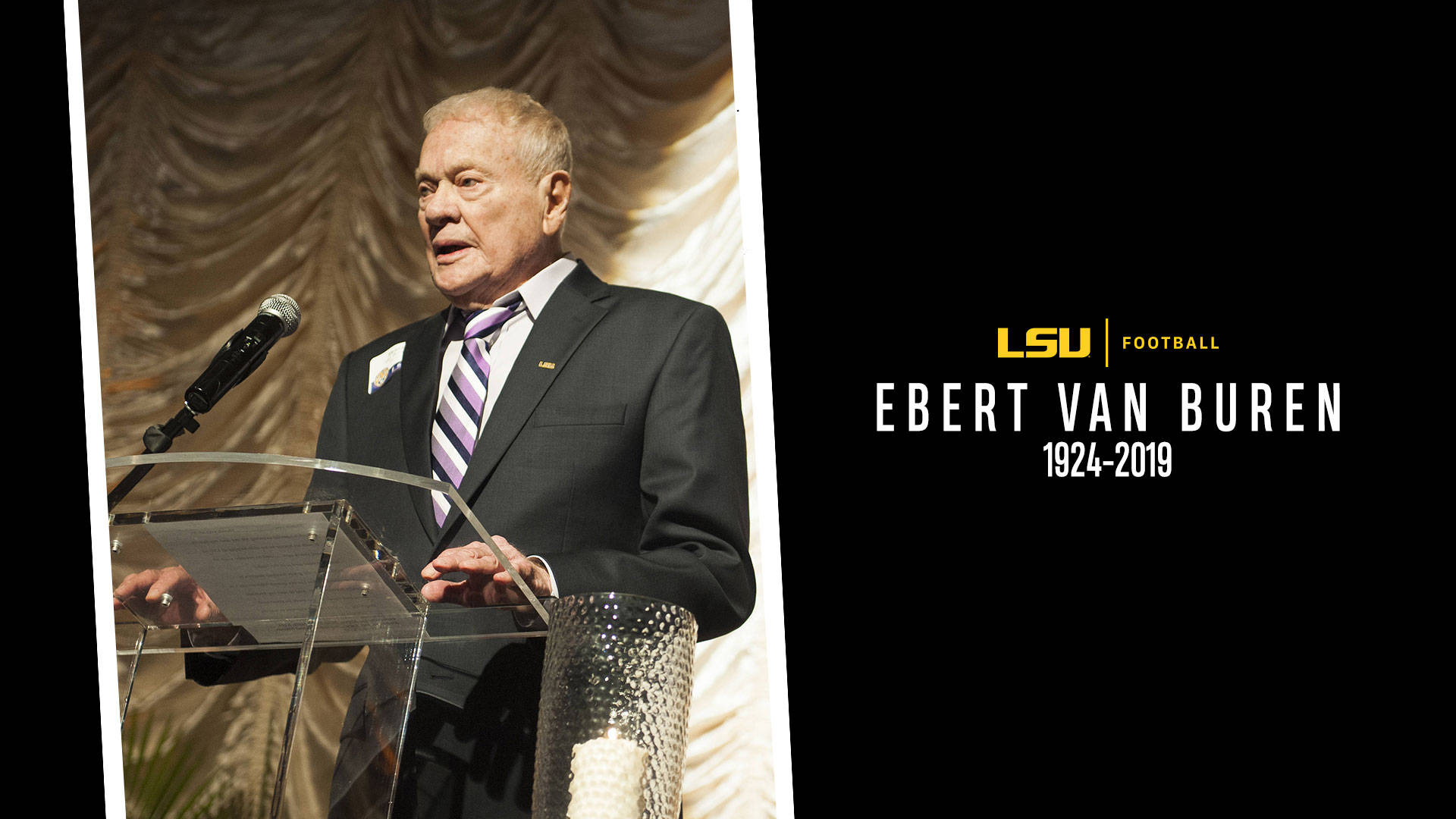 BATON ROUGE – LSU Athletics Hall of Fame member and two-way football star in the years after World War II, Ebert Van Buren, passed away on Friday in Monroe at the age of 94 at the Northeast Louisiana War Veterans Home.

Van Buren’s late brother Steve, is a member of the LSU and NFL Halls of Fame. Ebert Van Buren was a 2015 inductee into the LSU Athletics Hall of Fame.

From pickup games on the playground to college football, it was an adjustment for Van Buren in conditioning and in learning the game.

“I remember an incident when we were at practice with Bernie Moore as coach,” Van Buren recalled. “He told me to go out in the flat and catch a pass. I ran over the goal line. Of course, that was a mistake. I got back in the huddle and Coach said, ‘I told you to go in the flat.’ I said, ‘Coach I don’t even know where that is.’”

It didn’t take long for Van Buren to catch on to the game. He earned three letters as he played on both sides of the ball as a fullback and linebacker. He helped lead the 1949 Tigers to a Sugar Bowl berth, as the squad posted wins over three different conference champions en route to the bowl invitation. One of the highlights of the season was a 34-0 victory over Texas A&M, as Van Buren rushed for 121 yards in the rout.

Van Buren said one of the best moments of his career was his selection as LSU team captain for the 1950 season.

“That meant a lot to me,” Van Buren explained. “I started off not knowing anything. The players who came to LSU were high school stars, and I was elected captain of the team over them.”

At the end of the 1950 season Van Buren was invited to play in the Shrine Bowl and the Senior Bowl. After his impressive career in college football, he was the No. 1 draft choice of the Philadelphia Eagles in 1951. Ebert Van Buren played for the Eagles for three years and was selected for the NFL Pro Bowl team in 1952.

Following his NFL career, Van Buren returned to LSU to earn his master’s in psychology in 1961. He began a private practice in which he specialized in working with children with autism and special needs. He also served as the Disability Determination spokesperson for the state of Louisiana, and he worked as a psychologist for the Winn Correction Center.

He practiced for over 60 years and assisting his young patients that couldn’t afford expenses toward their school athletics.

Van Buren also worked for eight years as Ouachita Parish Coroner and he served as a Lt. Commander in the U.S. Naval Reserve from 1972 to 1980. On top of his private practice and military service, he earned his certification as a scuba diving instructor and taught at UL-Monroe, the YMCA and Louisiana College for 41 years, emphasizing the need for ocean and reef conservation.

Ebert was born on the island of Tela, Honduras in 1924. He moved from Utila to New Orleans at age 8 to continue with his education until joining the service in 1943. He served in the U.S Army 96th Infantry Division in the Pacific during WWII from 1943 until 1945 was in the Leyte, Philippines and Okinawa, Japan campaigns where he was wounded in intense heavy combat on “Hacksaw Ridge” in Okinawa on his 29th day in that campaign.

He received the Purple Heart, two Bronze Stars, the Philippine Liberation Medal, Combat Infantry Badge, and the Good Conduct Medal. He was the only survivor in his unit in Okinawa when the war ended. He later served as Lt. Commander in the U.S. Naval Reserve in the 1970’s and was attached to Admiral Elmo R. Zumwalt, Jr.’s command assisting with contributions toward the improvement of enlisted personnel life and racial tensions in the Navy.

Ebert Van Buren is survived by his daughters Karen Oliver, and husband Robert of Monroe; Sharen Haddad and husband Jon of Houston; Joan Van Buren of Monroe; Vanessa Clark and husband James of West Monroe; and, one son, Ebert H. Van Buren, Jr. He will be interred in a private ceremony at Mulhearn Memorial Park Mausoleum.