After Stumble, Tigers Ready to Recover in Game Two 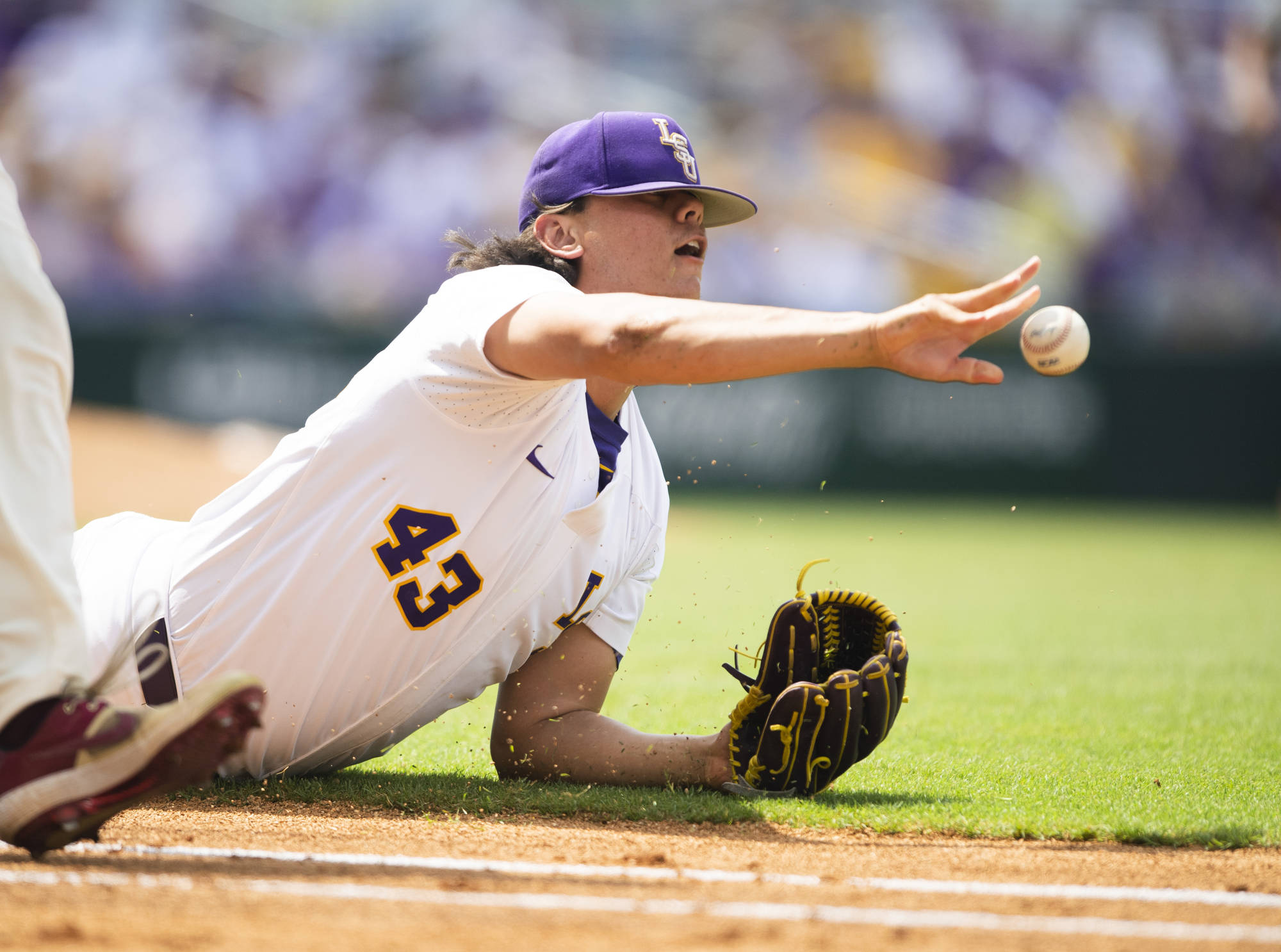 What do you do when you’re down on the ground and hope seems lost?

If you’re Todd Peterson, you take the ball out of your glove and toss it to first base.

The box score will record the play as a simple 1-3 putout in a Super Regional game LSU lost 6-4 to Florida State, setting the stage for a win-or-go-home game Sunday at 5 p.m.

But Peterson’s play in the top of the third inning, like many he’s made in his career, could also stand as a symbol for something beyond statistics.

The oft-quoted, never imitated relief pitcher was the highlight of a forgettable afternoon, giving up just two runs on three hits in 4.1 innings out of the bullpen Saturday. He inherited a 1-0 LSU lead in the top of the third after starter Cole Henry left with arm soreness following two scoreless innings, and he left with a 4-1 lead in the seventh after striking out four Seminoles and throwing a season-high 80 pitches.

“It was heartbreaking to have to take Cole Henry out of the game with arm soreness, but Todd Ptterson came in and was absolutely heroic,” head coach Paul Mainieri said. “He was phenomenal. I don’t know if he’s thrown 80 pitches in a game all year.”

Many were superb, but none matched his third-inning defensive effort off the bat of Reese Albert, whose two homers later in the game fueled Florida State’s comeback. When Albert rolled a soft grounder to Peterson’s glove side, the junior pitcher adjusted his hat while chasing the ball, before stumbling as he fielded it and falling on his face.

Undeterred, he flipped the ball to first from a prone position to get the out.

Six innings later and a tough defeat later, his team finds itself in a similar position. The Tigers stumbled Saturday, despite a solid start, and now they find themselves down in a precarious position.

Down, but not out. It’s a precarious position, but not a terminal one.

“We’re going to get another chance to play tomorrow,” said shortstop Josh Smith, who went 2-for-5 and scored two runs. “We’ve just got to come out tomorrow, forget about today, and just get on with it.”

For five innings, there was plenty of good for LSU, but there was also enough bad to prevent them from building a larger lead. Peterson and Henry combined for a no-hitter through five innings, and despite Henry’s short stint, Peterson’s ability to go deep kept the Tiger bullpen fresh enough to continue the rest of the weekend.

Mainieri said every LSU pitcher is available Sunday and Monday, other than Peterson and Henry.

“He gave us the extension we needed to make up for having to take Cole out,” Mainieri said.

Offensively, the Tigers battled Florida State starter Drew Parrish with solid at-bats. Seven of LSU’s nine leadoff men reached base, with the home team scoring one run in each inning from the second to the fifth.

None became crooked numbers, though, as a couple of baserunning miscues cut rallies short.

“We squandered a couple of opportunities early where I felt like we really could have extended the lead,” Mainieri said.

On the hill, the Tigers walked far too many hitters, with Florida State – fourth nationally in walks drawn – getting 10 free passes. Of their six runs, three were scored by men who reached base on balls.

“We just walked too many batters,” Mainieri said. “If we didn’t walk them, we were in a full count on everybody. Florida State’s known for trying to draw a lot of walks. We knew that. We’ve just got to be a little more aggressive in the strike zone and make them hit more.”

Like Peterson’s stumble, the Tigers’ costliest problems Saturday were self-inflicted. On the other hand, those mistakes are correctable, and if LSU can inflict less damage on itself Sunday, it can direct more of it toward its opponent.

Perhaps that’s why the locker room after the game, while disappointed, was not dejected.

The pen is fresh. The lineup is confident. Landon Marceaux, the Tigers’ top pitcher over the past six weeks, gets the ball. Tomorrow is a new day.

Stumbles happen. So do comebacks.

“We’re going to have to win the first one before we win the second one,” Smith said.  “It’s been done here before. Not many guys are too down on themselves.”