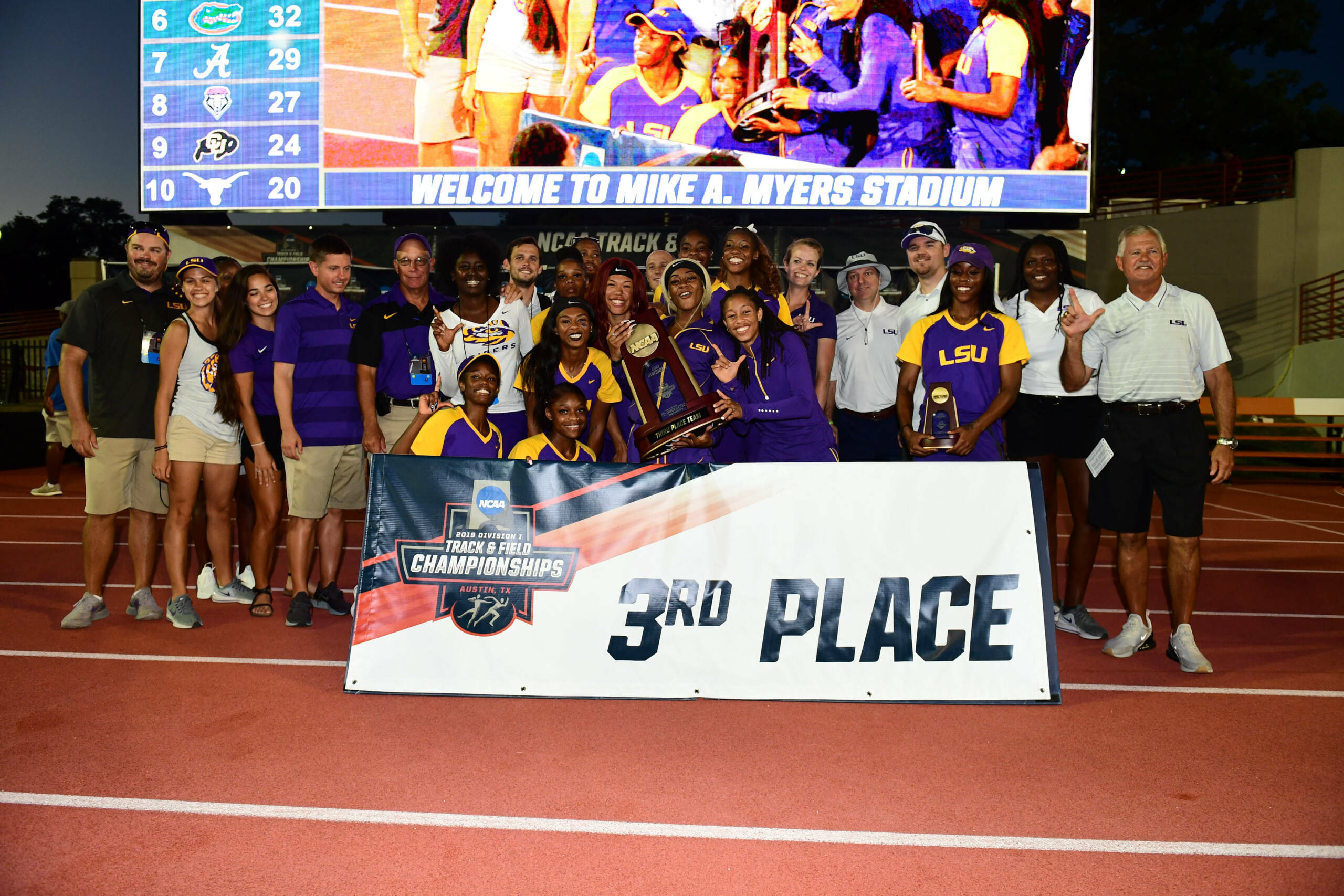 “Knowing the kind of tradition LSU has in the women’s sprints, it’s kind of crazy to think I’m up there with the all-time greats,” Richardson said after her busy day on the track. “You see those names like Dawn Sowell, Kimberlyn Duncan, Aleia Hobbs, and Mikiah Brisco, and to know that I’m in their presence is special.

“Today was a great day on the track and I’ll never forget it. To set all those records in my home state in front of family and friends is truly special. I’m just glad I could go out there and put some points on the board for my team.”

As a team the LSU women took third with 43 points.

In the hurdles, LSU had two bronze showings with third-place finishes by Tonea Marshall (100m hurdles) and Brittley Humphrey (400m hurdles). Jurnee Woodward added in three points with a sixth-place finish in the 400 meter hurdles and Ersula Farrow was the final scores with two points in the 800 meter run.

It’s LSU’s best finish at the outdoor NCAA Championships since 2011. Richardson’s total of 20 points made her the High Point Scorer of the Meet; she is the first freshman to accomplish that since Ariana Washington of Oregon did so in 2016.

Richardson in the 100 Meters

There was a palpable buzz around the track once the gun went off in the 100 meters at Mike A. Myers Stadium as three of the world’s fastest six runners for 2019 were on the sprinting towards the finish line. Richardson had a steady start out the blocks and remained even with the rest of the field through the first 50 meters, and that’s when she stepped on the gas pedal to pull away. Richardson crossed the finish line in 10.75 seconds and she struck an her iconic “hands up, deuces” pose as she did it.

The crowd waited for the official time, and there were a bunch of ooooohs and ahhhs when the 10.75 flashed up on the board. With her win in the 100, Richardson made it three straight titles for the Tigers in the event as Mikiah Brisco won in 2017 and Aleia Hobbs won last year. Richardson’s win was the ninth in school history which is the most by one program in NCAA history.

Richardson in the 200 Meters

Forty-five minutes after her 100 meter title, Richardson returned to the track to make some more U20 world history. Richardson ran the half lap in 22.17 seconds to make her the fastest U20 woman in world history as she broke all-time great Allyson Felix’s junior record of 22.18 that she ran in 2004. It was the fifth-fastest time in collegiate history and the second in the LSU record book. Richardson took second in the race as she was outleaned by USC’s Anglerne Annelus, who won with a time of 22.16.

Tonea Marshall took third in the 100 meter hurdles with a time of 12.66 that lowered her previous school record of 12.67 that she ran on Thursday night. It was Marshall’s third-career All-America honor and it was her best finish at an NCAA meet in her career.

The hurdling duo of Jurnee Woodward and Brittley Humphrey put together solid performances in the 400 meter hurdles. Humphrey ran a lifetime best of 56.11 to place third and earn the best finish of her career at the NCAA meet. Woodward earned her first career All-America honor by taking sixth and finishing with a time of 57.48.

The foursome of Tonea Marshall, Kortnei Johnson, Rachel Misher, and Sha’Carri Richardson ran a season-best time of 42.29 in the 4×100 meter relay to take second behind USC’s 42.21 that set the facility record. The time of 42.29 is the second-fastest time in the world this year. Johnson closed her career as a nine-time All-American and two-time national champion while Misher closed out her career with seven All-America honors and one national title. The 42.29 rates this crew as the third-fastest crew in school history and the eighth fastest in NCAA history.

Farrow Closes Out Career in 800 Meters

Senior Ersula Farrow ran a time of 2:04.80 in the 800 meters to take seventh place and score two points for LSU; it was her first-career individual All-America honor.