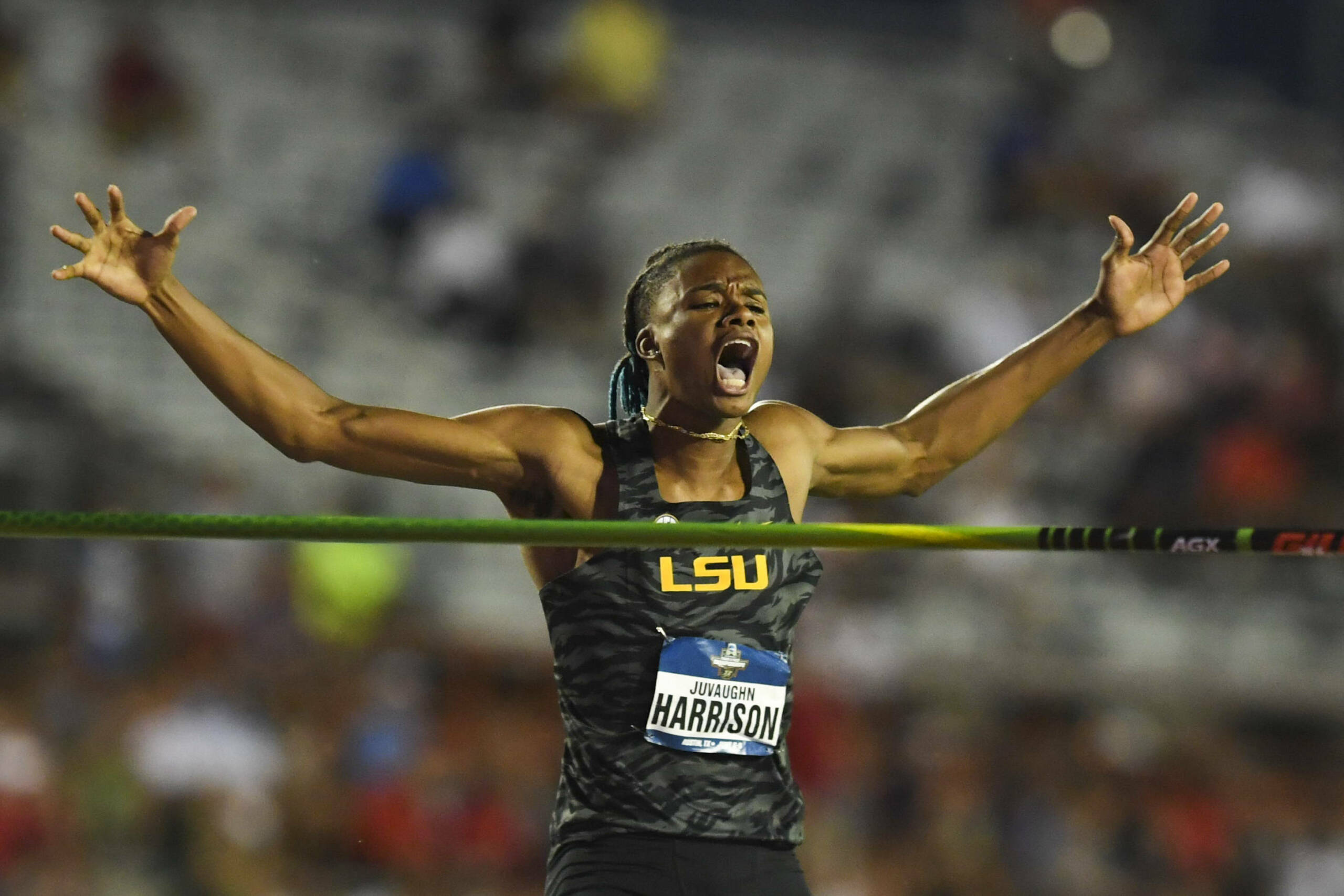 Austin, Texas – Uncharted territory. That’s where JuVaughn Harrison went on Friday night on day three of the NCAA Championships at Mike A. Myers Stadium. Harrison became the first man in NCAA Outdoor Championships history, a meet that dates back to 1921, to win both the long and high jump national titles at the same meet.

Harrison was impeccable in the event as he cleared a career-best height of 7′ 5.25” (2.27 meters) to win his second career national title just two days after he picked up his first career national title. The mark of 7′ 5.25” is the second best jump in program history at LSU, and Harrison becomes the first man in program history to win an outdoor national title in the high jump. The jump of 7′ 5.25” is the second best in program behind Tom Lange’s 7′ 5.75” clearance in 1990, and Harrison became only the third man in school history to score for the Tigers at the outdoor national meet in the high jump joining the likes of Larey Weaver (1981/T2nd) and Randy Geyer (1965/T5th).

“This was pretty significant for me because last year I went out early in both events (the high and long jump),” Harrison said in an interview with The Advocate. “This year, I wanted to go out there and have fun and jump, and not worry about anybody else.”

Harrison’s national title in the high jump brought LSU’s team total to 28 points with 20 points from Harrison and eight from Mondo Duplantis in the pole vault. The Tigers finished seventh with the 28 points, and it marks the 22nd-straight time that the men’s squad has finished in the top 10 at the NCAA outdoor championships.

LSU’s only other two events of the day saw Christian Miller earn Second Team All-America honors with a 15th-place finish in the triple jump with a mark of 52′ 3.75” (15.94 meters). In the men’s 4×100 meter relay, Kary Vincent Jr. and Akanni Hislop were unable to successful make the first exchange and LSU was unable to finish the race.

The final day of women’s competition will take place on Saturday (ESPN2 @ 5:30 p.m. CT). The women have set themselves up with seven scoring opportunities. The women’s 4×100 meter relay, Sha’Carri Richardson (100 & 200 meters), Tonea Marshall (100m hurdles), Ersula Farrow (800m run), Jurnee Woodward (400m hurdles) and Brittley Humphrey (400m hurdles) are the events and athletes that will have chances to score. LSU still remains scoreless on the women’s side, but their seven scoring chances on Saturday are the second most in the field.