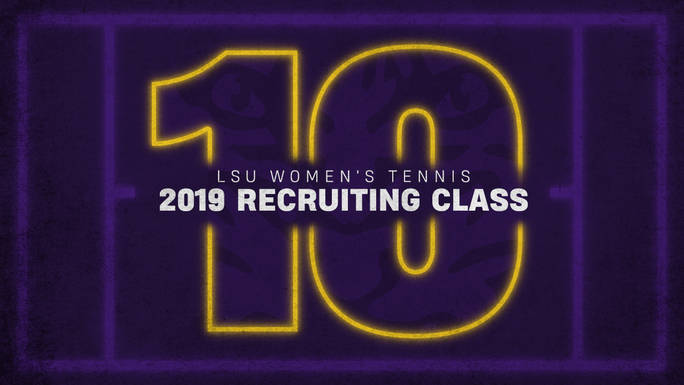 BATON ROUGE – LSU women’s tennis co-head coaches Julia Sell and Michael Sell are excited to announce today that the LSU recruiting class of 2019 has been ranked No. 10 in the country by tennisrecruiting.net.

The 2019 class’ ranking means that LSU will finish in the Top 10 in recruiting for the fourth consecutive class, a streak that began with the 2016 class being ranked at No. 1.

The new Tigers, Safiya Carrington, Maggie Cubitt, and Nina Geissler, will arrive on campus and be instant contributors to a squad that graduated seniors Jessica Golovin and Kennan Johnson in May.

Carrington has ranked as high as the No. 15 prospect in the country and is from South Hadley, Massachusetts. Carrington currently sits at No. 813 in the WTA Pro Singles rating.

Cubitt is a three-time High School State Singles Champion of Spartanburg, South Carolina. The five-star prospect is listed as the No. 17 recruit in the country according to tennisrecruiting.net.

Geissler comes from Switzerland and has climbed as high as 137 in the International Tennis Federation World Singles rankings. She has several impressive wins this year, including the Switzerland Girls 18s National Championship in January.