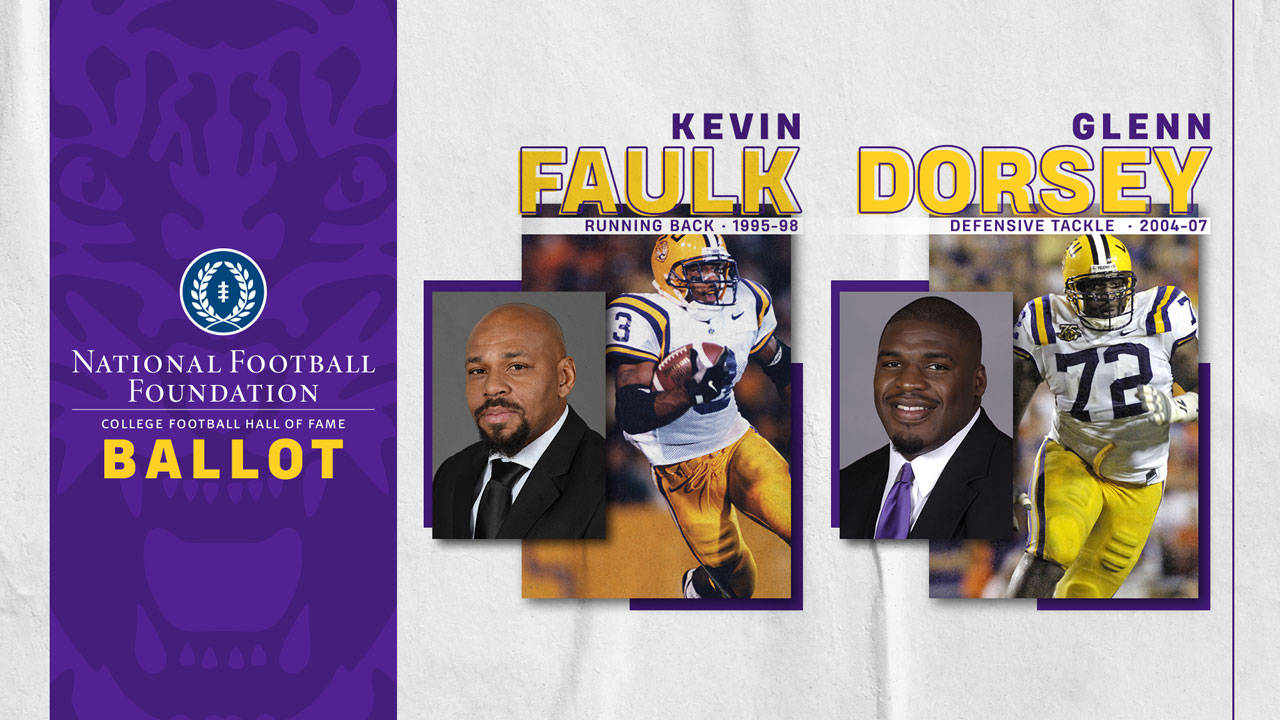 BATON ROUGE – Two all-time LSU greats – Kevin Faulk and Glenn Dorsey – have been placed on the ballot for the 2020 College Football Hall of Fame, the National Football Foundation announced on Monday.

Faulk, who earned first team All-America honors as an all-purpose back in 1996, remains the Southeastern Conference record holder for all-purpose yards (6,833) and he’s the LSU record holder career rushing yards (4,557) and rushing touchdowns (46).

Faulk, a 1999 graduate of LSU, is currently the Director of Player Development for his alma mater.

Dorsey is the most decorated defensive player in school history, winning four national awards in 2007. Dorsey captured the Outland, Lombardi, Nagurski, and Lott Awards as a senior as he helped guide the Tigers to the national championship that season. He was also named SEC Defensive Player of the Year for the Tigers in 2007.

“It’s an enormous honor to just be on the College Football Hall of Fame ballot when you think that more than 5.33 million people have played college football and only 1,010 players have been inducted,” said National Football Foundation President & CEO Steve Hatchell. “The Hall’s requirement of being a First-Team All-American creates a much smaller pool of about 1,500 individuals who are even eligible. Being in today’s elite group means an individual is truly among the greatest to have ever played the game, and we look forward to announcing the 2020 College Football Hall of Fame Class in January.”

“Having a ballot and a voice in the selection of the College Football Hall of Fame inductees is one of the most cherished NFF member benefits,” said NFF Chairman Archie Manning, a 1989 Hall of Fame inductee from Ole Miss. “There is no group more knowledgeable or passionate about college football than our membership, and the tradition of the ballot helps us engage them in the lofty responsibility of selecting those who have reached the pinnacle of achievement in our sport.”

The announcement of the 2020 Class will be made in January 2020 prior to the College Football Playoff Championship Game in New Orleans.

The 2020 College Football Hall of Fame Class will officially be inducted during the 63rd NFF Annual Awards Dinner on Dec. 8, 2020, at the New York Hilton Midtown. They will also be honored at their respective schools with an NFF Hall of Fame On-Campus Salute, presented by Fidelity Investments, during the 2020 season.