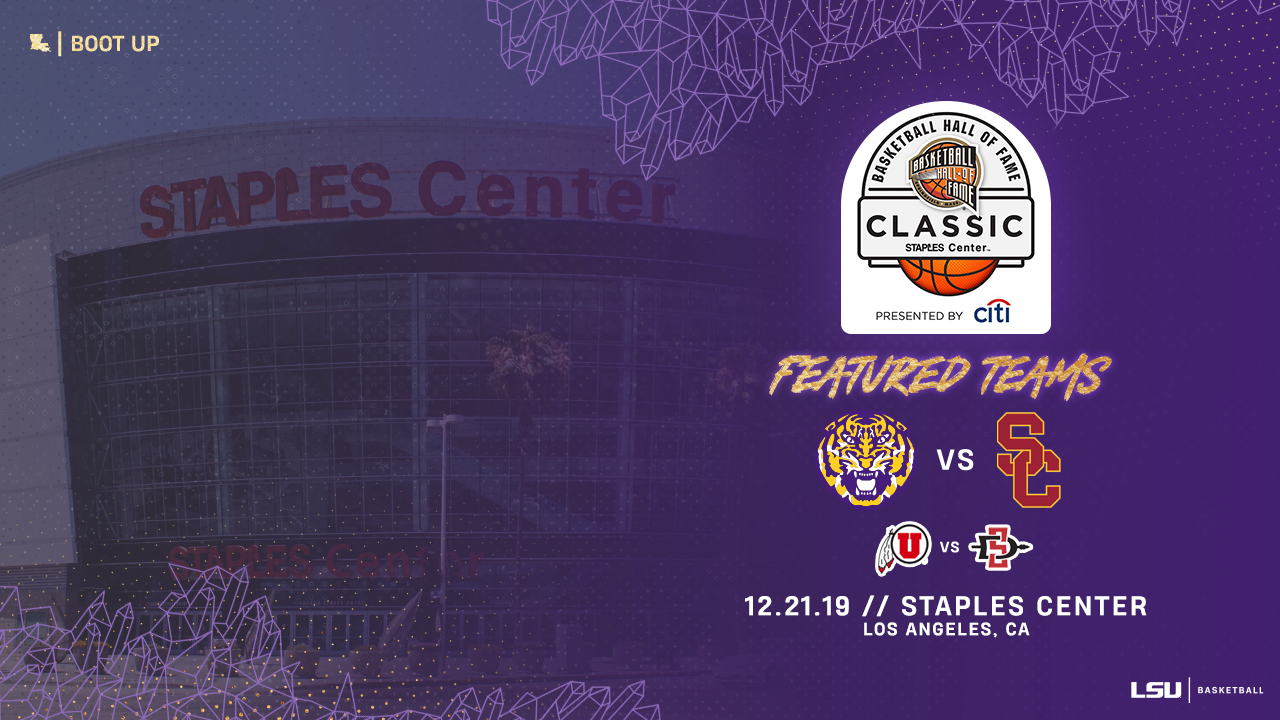 The one-day doubleheader will feature LSU vs. the University of Southern California and Utah vs. San Diego State.

“We are excited about participating in this year’s Basketball Hall of Fame Classic at the STAPLES Center,” said LSU Coach Will Wade. “We look forward to bringing our team out West for the second straight season and to our matchup with USC on what will be a great day of college basketball in Los Angeles.”

“Now in its fourth year, the Basketball Hall of Fame Classic is a wonderful opportunity for college hoop fans to catch a doubleheader in one of the most iconic basketball venues in the world,” said John L. Doleva, President and CEO of the Basketball Hall of Fame. “In partnership with Citi, AEG and STAPLES Center, we look forward to hosting another terrific college showcase and providing an exceptional experience to fans and our participating teams.”

Tickets for the Basketball Hall of Fame Classic will go on-sale to the general public on Thursday, June 6th, 2019 at Noon CT via AXS.com, by phone at 888-929-7849 and the STAPLES Center box office. Citi is the official presale credit card of the Basketball Hall of Fame Classic. As such, Citi card members will have access to purchase presale tickets on June 4th and 5th.

Game times and television broadcast information will be released at a later date.

The Naismith Memorial Basketball Hall of Fame is proud to continue its relationship with Learfield IMG College for sponsorship representation of its portfolio of collegiate events. This year’s series of collegiate events will be announced in the coming weeks.

“We have really enjoyed our association with the Basketball Hall of Fame Classic,” said Coach Andy Enfield of USC. “This will be our fourth consecutive season competing in the event and it has provided us with a great opportunity to face high-quality opponents and get national exposure for our team early in the season.” – Andy Enfield, USC

About STAPLES Center: STAPLES Center has clearly established itself as the sports and entertainment center of the world. As the home of four professional sports franchises – the NBA’s Los Angeles Lakers and Los Angeles Clippers, the NHL’s Los Angeles Kings and the most recent 2016 WNBA Champions Los Angeles Sparks – STAPLES Center has proven to be a home court advantage for the local teams. The AEG owned and operated arena continues to distinguish itself as the host of major, high-profile events of national and international distinction including the 2004 & 2011 NBA All-Star Games, 2002 NHL All-Star Game, 2000 Democratic National Convention, 2009 World Figure Skating Championships and 15 of the last 16 GRAMMY Awards shows. STAPLES Center’s sixteen years have also been marked with performances and special events that brought international stature to the downtown Los Angeles venue including concerts Taylor Swift, Beyonce, Prince U2, Paul McCartney, Garth Brooks, Usher, Jay-Z, Kanye West, Keith Urban, Roger Waters, Britney Spears, Katy Perry, Sade and Justin Timberlake, as well as world championship boxing, family shows and special events. Hosting over 250 events a year, the arena’s reputation for world-class amenities, features and commitment to quality of service and the guest experience is second to none. Staples, Inc. entered into a 20-year agreement to become the arena’s Naming Rights Partner December 1, 1998, which has since been extended into perpetuity.

About the Naismith Memorial Basketball Hall of Fame: Located in Springfield, Massachusetts, the city where basketball was born, the Naismith Memorial Basketball Hall of Fame is an independent non-profit 501(c)(3) organization dedicated to promoting, preserving and celebrating the game of basketball at every level – men and women, amateur and professional players, coaches and contributors, both domestically and internationally. The Hall of Fame museum is home to more than 400 inductees and over 40,000 square feet of basketball history. Nearly 200,000 people visit the Hall of Fame museum each year to learn about the game, experience the interactive exhibits and test their skills on the Jerry Colangelo “Court of Dreams.” Best known for its annual marquee Enshrinement Ceremony honoring the game’s elite, the Hall of Fame also operates over 70 high school and collegiate competitions annually throughout the country and abroad. For more information on the Basketball Hall of Fame organization, its museum and events, visit www.hoophall.com, follow @hoophall #HOFClassic or call 1-877-4HOOPLA.