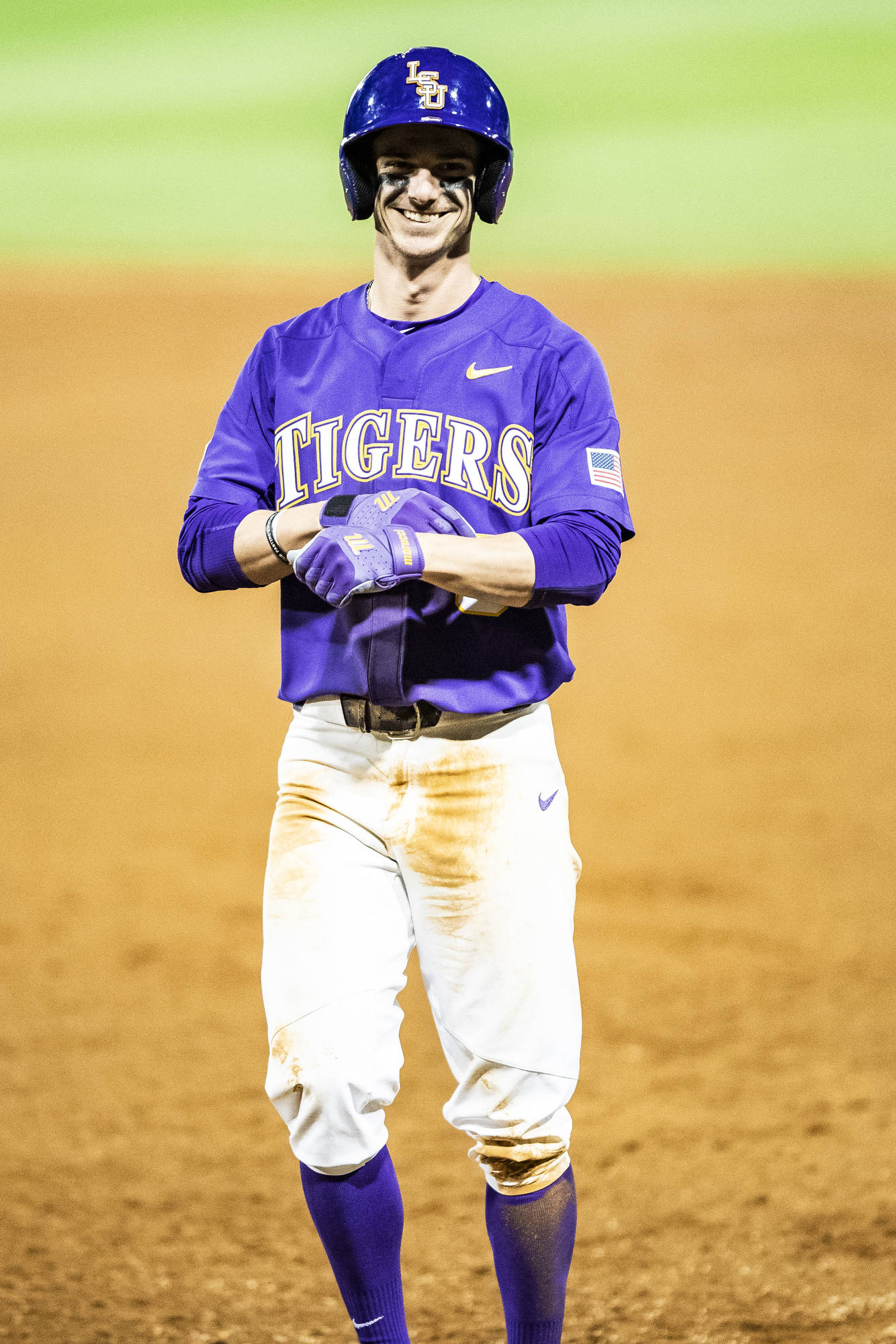 Zach Watson likes his Internet to run like he does: faster.

You know LSU’s junior centerfielder for his blazing speed on the base paths and in the outfield, stealing 11 bases and playing nearly flawless centerfield as an SEC All-Defensive Team member.

What you don’t know about Watson – unless you’ve needed IT help in LSU’s Athletics Department this past semester or assisted in installing various high-tech equipment around Alex Box this spring – is he’s every bit as gifted technically as he is athletically.

When he’s not chasing down fly balls or ripping doubles down the lines, the ISDS minor is a bit of a handyman, particularly when it comes to technology. It’s a talent he developed out of necessity in childhood. An avid gamer in his early teens, Watson got tired of laggy Wi-Fi and turned himself into a self-taught tinkerer of all things tech.

“If the internet runs slow or the computer runs slow, I’d try to figure out how to make it faster. I hate when my internet is slow and I can’t do anything,” he says. “I’d just sit there and Google all day what I could do to fix it.”

If slow connection speeds weren’t enough motivation to learn computer skills, the technological autodidact had another inspiration. The son of a self-employed painter growing up in Ruston, Watson quickly learned he had no interest in taking up his father’s trade.

The pain of painting pushed Watson in baseball, too, when he realized he’d much rather hold a bat than a brush.

“The better I was at baseball, the less I had to paint,” he laughs.

That motivation – plus plenty of hard work, a natural, wiry strength, and jets for legs — turned Watson into the No. 1 recruit in Louisiana coming out of high school in 2016. When he arrived at LSU in the fall of 2016, he decided to major in Interdisciplinary Studies, a degree which allows students to choose three minors with a capstone/milestone course. Among those minors: Information Systems and Decision Sciences (ISDS) – “the study of technology, business processes, people and organizations, and the relationships among them,” according to LSU’s general catalog.

“I thought it was fun,” Watson says. “Growing up, I’ve always liked working with computers, messing with them, do new things with them. It was pretty fun, getting to learn what that job does.”

As part of his studies, Watson interned in the IT department for LSU’s athletic department this spring. He spent much of his time fixing printers, updating iPads, and resetting software, but he also helped with various projects around Alex Box.

Charged your phone using one of the ports in The Yard during a game this season? Watson helped install those. He also worked on the installation of a new hard drive in the Alex Box press box, and any chance he could work with baseball’s video coordinator Jamie Tutko or get hands-on with the Trackman ball tracking technology the program utilizes daily, he pounced on it like a sinking line drive.

“Anything baseball-related, I’d try to come out here and help out with it and see what they did to fix it,” he says.

The work appeals to Watson’s brain. It’s its own unique language, an ever-changing puzzle to be solved. Fixing technology problems is sort of like working on a baseball swing: symptoms could indicate one issue, but the underlying issue could be something completely different, and the best way to know you’ve fixed it is when it starts working again.

The printers start printing, the chargers start charging, and the hitter starts hitting.

“The thing I like about it most is it’s always something new,” he says. “The problem could be something completely different, even if it’s showing the same signs as something that has happened before. It’s trying to figure it out and figure out new ways to fix it.”

Watson’s a fixer in other areas, too. He had a red Jeep in high school he loved to tinker with, and he’s a true outdoorsman who hunts and fishes any chance he gets, tying his own lines and cleaning his own game.

Junior pitcher Todd Peterson lives with Watson, and he knows exactly who to call any time he runs into a tactile problem in need of a solution.

“He’s a hands-on handyman,” Peterson says. “If you break down in your car, you need to change a tire or something, you find a crocodile or alligator in your neighborhood and you need to get rid of it, that’s the man you go to.”

All hands on deck! @brockmathis22

IT might be where Watson ends up professionally, but his combination of speed, power, and defensive acumen means he has plenty of baseball to play before he finds a job in technology. The only job he’s focused on right now is helping the Tigers advance beyond the regionals of the NCAA Tournament this weekend, and he’s riding into postseason play having reached base in nine straight games.

It’s the time of year where Watson tends to be at his best, too. As a freshman, he was LSU’s leading hitter in NCAA Tournament games, batting .333 (16-for-48) with one double, five homers, 10 RBI, 12 runs and four steals, including a four-homer coming out party in the Baton Rouge Regional. He also hit .353 (6-for-17) in the Corvallis Regional last year, with a double and a homer.

“I feel like my focus level gets up, because I’m focused on school anymore,” he says. “When school gets out, it’s all baseball, it’s all games. And you want to make that run to Omaha. I’ve tried to turn it up a little.”

That’s exactly what his coach is looking for.

“We need to have Watson going,” Paul Mainieri says. “To win at this level, at this time of year, you can’t just have one or two guys. The whole team has to be locked in, getting good swings off. Hopefully, Zach will really get it going this week.”

Watson plans to do just that. Someone else will have to worry about the WiFi this week.

This time of year, he’s all baseball.