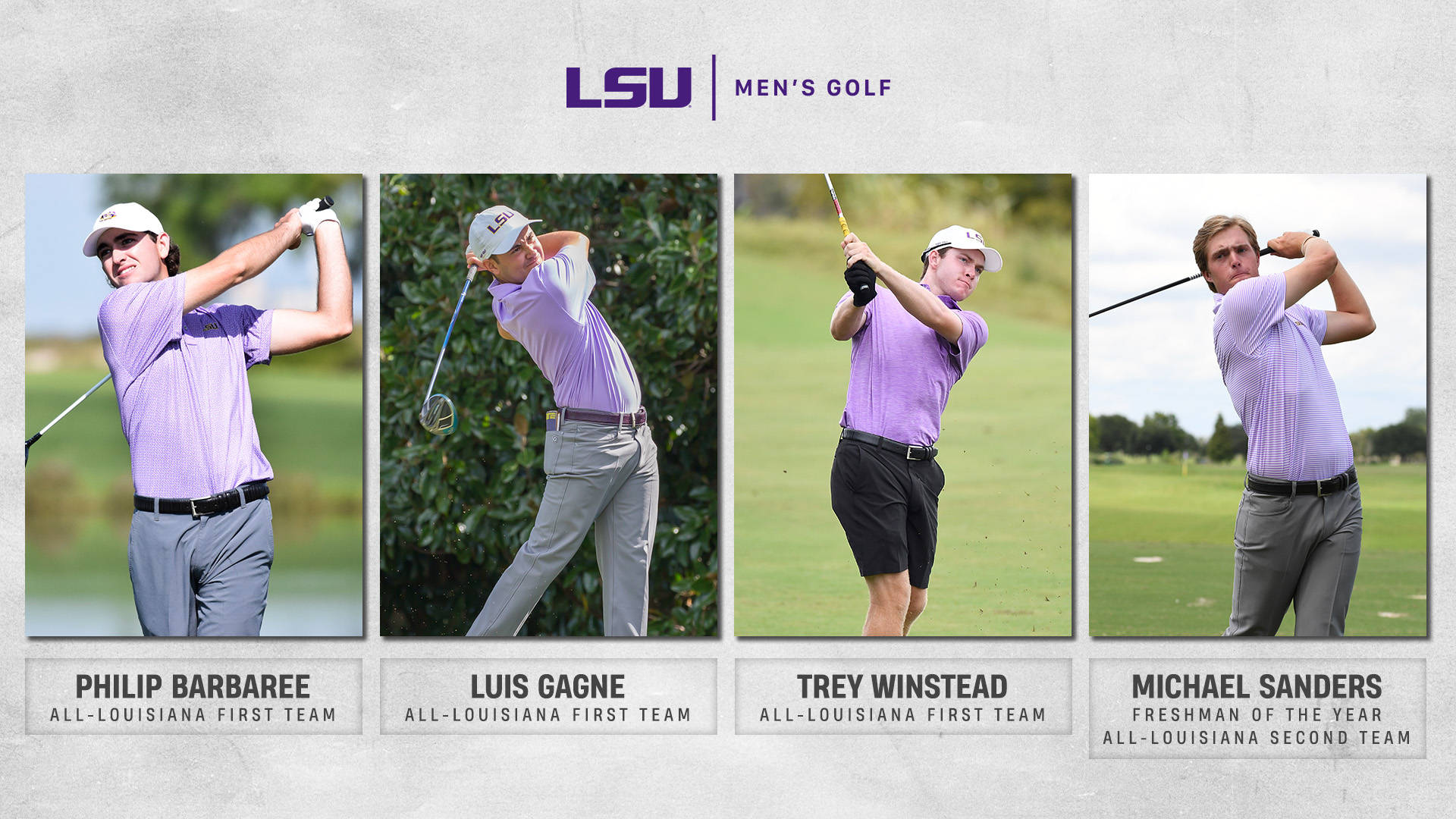 BATON ROUGE – The LSU quartet of Philip Barbaree, Luis Gagne, Trey Winstead and Michael Sanders earned All-Louisiana Men’s Golf honors as announced by the Louisiana Sportswriters Association. Barbaree, Gagne and Winstead were named to the first team, while Sanders was voted the 2019 Louisiana Freshman of the Year and named to the second team.

Barbaree was sporting a 71.20 average going into this week’s NCAA Championship tournament at The Blessings in Fayetteville, Arkansas. The junior from Shreveport, Louisiana, is the only Tiger to compete in every round for LSU this season and leads the squad with 17 rounds of par or lower so far during the 2018-19 season. He posted a season low round of 5-under 66 in the third round of The Prestige and recorded three top-5 individual finishes. Barbaree finished tied for third at The Prestige and earned SEC Golfer of the Week honors for the performance. This week is his second appearance in the NCAA Championship.

Gagne leads the Tigers with a 71.04 stroke average going into the NCAA Championship. The senior from Orlando, Florida, shot a season low round of 8-under 62 in the first round of the Maui Jim Intercollegiate, the lowest of his 14 rounds of even par or lower. Gagne, making his third appearance in the NCAA Championship, earned four top-10 finishes during the 2018-19 season. He finished tied for sixth place at the Maui Jim Intercollegiate and The Prestige, tied for seventh at the Querencia Cabo Collegiate and tied for 10th at the NCAA Stanford Regional. His performance at the Querencia Cabo Collegiate earned him SEC Golfer of the week honors.

Winstead holds the third-lowest scoring average on the squad at 71.78 going into the NCAA Championship. The sophomore from Baton Rouge shot a season low round of 4-under 68 in the first round of the David Toms Intercollegiate on his way to the tournament’s individual title. Winstead also tied for ninth place at the Shoal Creek Invitational for his second top-10 finish of the season. He finished in a tie for 11th place at The Prestige to push LSU to the team title. Winstead currently has 13 rounds of par or under on the season.

Sanders, a rookie from Davidson, North Carolina, averaged 72.19 strokes per round over the 21 rounds he competed in before heading to Fayetteville this week. He posted low rounds of 5-under 67 twice this season in the David Toms Intercollegiate and the Tavistock Collegiate. His best individual finish was fourth place at the David Toms, followed by a tie for fifth place at the Tavistock two weeks later. Sanders has posted 11 rounds of even par or lower in his freshman campaign.