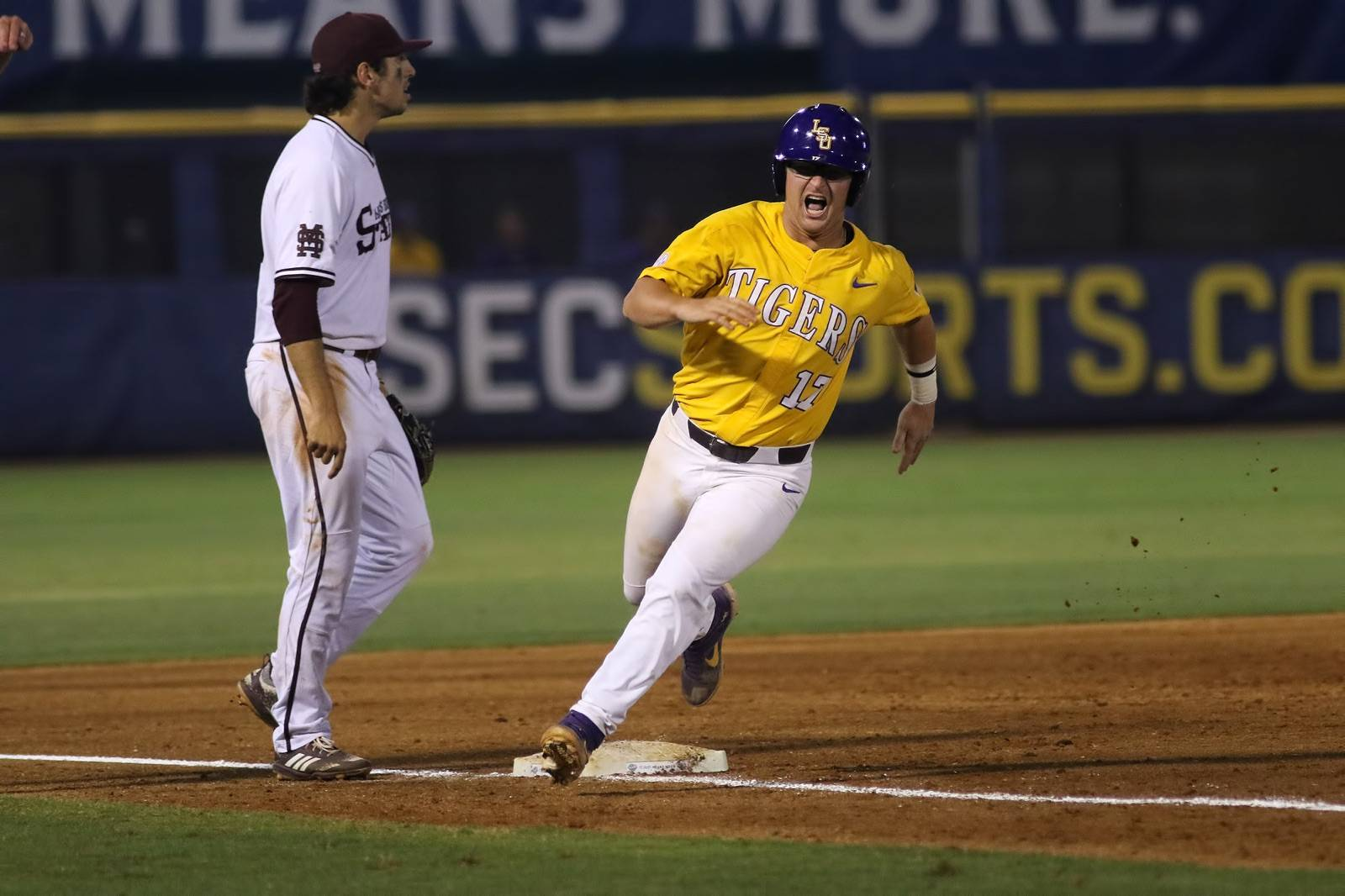 HOOVER, Ala. – LSU pitchers Clay Moffitt, Aaron George and Chase Costello combined to limit third-ranked Mississippi State to six singles Friday night, as the Tigers posted a 12-2 win over the Bulldogs to advance to the semifinal round of the SEC Tournament in Hoover Metropolitan Stadium.

LSU (37-23) reached the tournament semifinals for the seventh-straight year. Mississippi State (46-13) was eliminated from the tournament with the loss, as the game was stopped after seven innings due to the tournament’s 10-run mercy rule.

The Tigers – seeded fifth in the tournament – will face top-seeded and SEC regular-season champion Vanderbilt at approximately 3:30 p.m. CT Saturday, as the tournament returns to single-elimination for the final four teams. The winner of the LSU-Vanderbilt game will face the winner of Saturday’s Ole Miss-Georgia game in the championship game at 2 p.m. CT Sunday.

“The first six at-bats we had tonight were about as non-competitive at-bats as you could have and (MSU starting pitcher JT Ginn) just went right through us the first two innings; we couldn’t even get a sniff and it looked like they were going to just dominate us,” said LSU head coach Paul Mainieri.

“The third inning we got a couple of big hits, and I think that loosened everybody up. After that, we just got a lot big hits and got a big enough lead, and as long as we threw strikes we had a chance to hold them down. I’m glad we only played seven innings. Every inning we can save our pitching helps.”

Moffitt started Friday’s game – his first career start against an SEC team — and limited the Bulldogs to two runs on one hit in 2.1 innings with three walks and two strikeouts.

The LSU lineup pounded out 12 hits and batted around in both the third and fourth innings. Mississippi State starter JT Ginn – the 2019 SEC Freshman of the Year – was charged with the loss, surrendering five runs – four earned – on four hits in 2.1 innings with two walks and five strikeouts.

LSU added two more runs in the third after a throwing error by Mississippi State third baseman Marshall Gilbert and a bases-loaded walk to Watson by reliever Tyler Spring.

The Bulldogs narrowed the deficit to 5-2 in the third when first baseman Tanner Allen and catcher Dustin Skelton lined RBI singles.

The Tigers exploded for seven runs on six hits in the fourth to expand the lead to 12-2. Bianco provided a sacrifice fly before leftfielder Daniel Cabrera slapped an RBI single and Watson belted a run-scoring double.

Reid followed with a two-RBI single and catcher Saul Garza added an run-scoring double to highlight the seven-run outburst.

“This tournament always seems to bring out the best in us,” Mainieri said. “I’m very proud of our team – we now have 21 wins against RPI Top 50 teams, and hopefully this give us an opportunity to be a host for an NCAA Regional.”