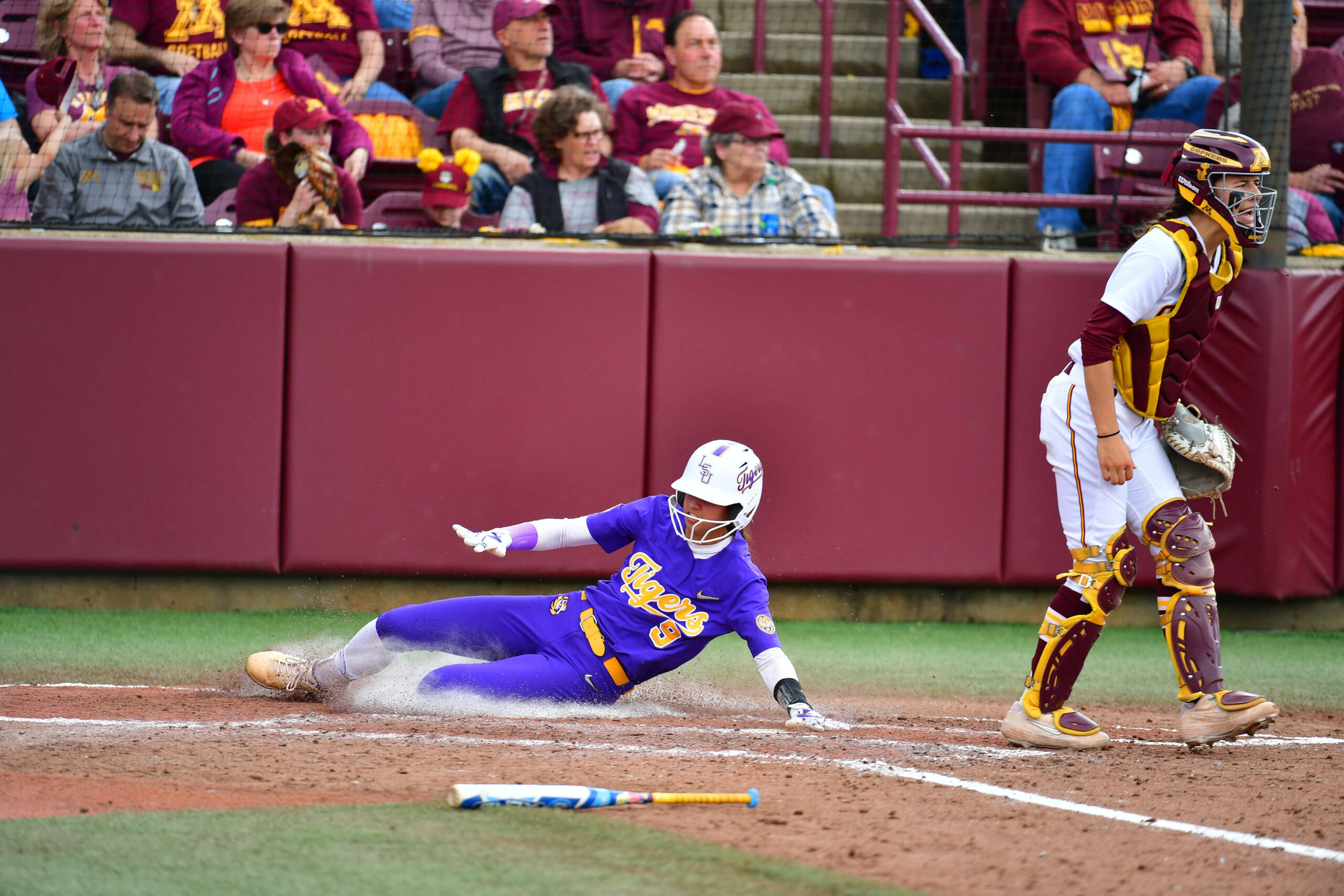 MINNEAPOLIS, Minn. – The 10th-ranked LSU softball team fell to No. 12 Minnesota, 5-3 in game one of the Minnesota Super Regional in Minneapolis. The Tigers fall to 43-18 on the year, while the Gophers improve to 45-12.

After two scoreless innings, LSU scored first in the top of the third. Aliyah Andrews reached on a hit-by-pitch to start the inning, and then successfully stole second for the 47th time this season. The next two Tigers went down in order and Shemiah Sanchez struck out swinging, but reached on a wild pitch. Andrews advanced to third on the wild pitch and then scored on a throwing error to give the Tigers a 1-0 lead.

The Gophers came back in the bottom of the third with a home run to tie up the game, 1-1.

In the top of the fourth, Amber Serrett helped her team take the lead back and crushed the ball over the right field wall, recording her eighth homer on the year. Elyse Thornhill doubled down the right field line and Amanda Sanchez singled to center field to score Thornhill. LSU had a 3-1 lead on Minnesota heading to the bottom of the inning.

Minnesota scored four runs off three hits in the bottom of the fourth to take a 5-3 lead on the Tigers.

Michaela Schlattman grounded out to third in the top of the sixth and Thornhill singled through the left side to get the Tiger bats started. Taryn Antoine came in to pinch run for Thornhill and advanced to second on a sacrifice bunt from Andrews, but a ground out to first base from Amanda Sanchez ended the inning.

Shelbi Sunseri led off the bats in the top of the seventh and reached a full count, but grounded out to shortstop. Shemiah Sanchez stepped up to the plate next and singled to center field, followed by a single from Savannah Stewart, but the game ended with a fly out to center field.

“Congratulations to Minnesota on a really good game. They played well. They’re a tough team. They are everything that they were built to be, so they did a nice job. I liked our team’s fight. I thought we didn’t get a break. We couldn’t create a break, as well. I thought we fought hard. We got some really stand-up offensive performances against a really tough pitcher. Our team has never been known for doing things the easy way. This is a spot that we’ve been in before. This is a spot that we’re unfortunately comfortable. We’ll show up tomorrow and continue to fight and battle. That’s why they call us the Fighting Tigers.”

On what needs to change for tomorrow’s game…

On the long at-bats…

The Tigers take on Minnesota Saturday at 5 p.m. in game two of the Minnesota Super Regional. The Tigers have to win Saturday’s game and then again on Sunday to advance to the Women’s College World Series.