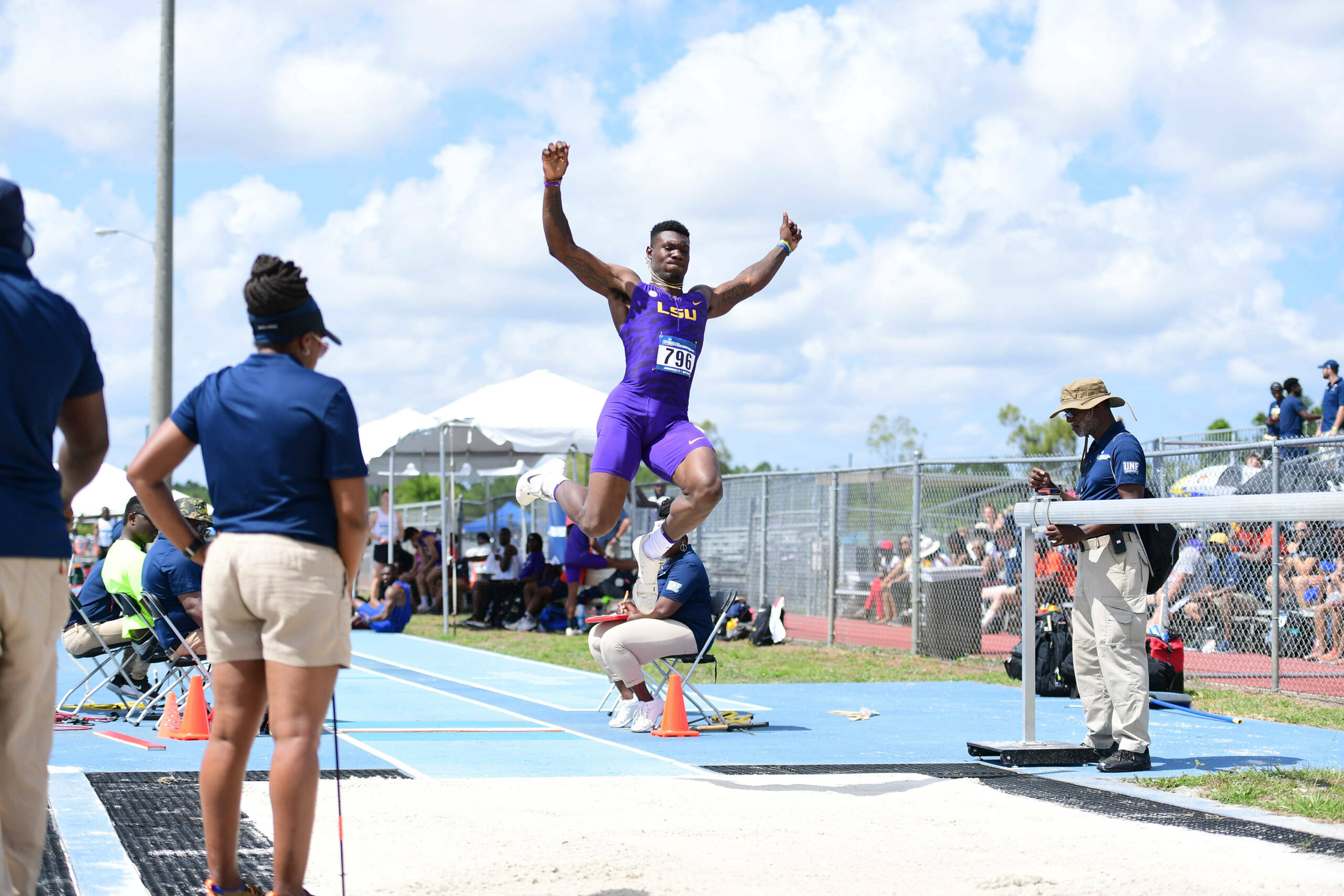 Jacksonville, Fla. – Kenan Jones, Rayvon Grey, JuVaughn Harrison, and Mondo Duplantis all secured their spots at the 2019 NCAA Outdoor Championships with quality performances on day one of the NCAA East Preliminaries on Thursday at Hodges Stadium.

The trio of Jones, Grey, and Harrison all punched their ticket to the NCAA Championships in the long jump and Duplantis did so in the pole vault.

Harrison registered the farthest leap of the long jump competition with his third and final attempt of the day. The sophomore from Birmingham, Ala., registered a leap of 26′ 1.75” (7.97 meters) to clinch his spot.

Grey recorded the third-best jump of the event with a bound of 25′ 7.25” (7.80 meters) on his second attempt to head back to the NCAA Championships. Grey is the 2019 NCAA indoor long jump champion and he placed fourth at the 2018 NCAA Outdoor Championships a year ago.

Last but not least was two-sport athlete Kenan Jones. The Berwick, La., native registered a personal best of 25′ 2.75” (7.69 meters) to clinch his first-career berth at the NCAA Championships as he finished sixth in the event of 48 long jumpers.

Duplantis, the collegiate record holder, only had to clear bars of 17′ 1” & 17′ 5” to advance to Austin, Texas, for the NCAA Championships that will take place June 5-8. Duplantis owns both the indoor and outdoor collegiate records and is won the NCAA indoor title earlier this season in March.

The rest of the day saw Tigers on the track attempting to advance to the quarterfinal rounds of their races. In the women’s 400 meter hurdles and men’s 100 meter dash, LSU moved three athletes apiece onto the round of 24 at the NCAA East prelims. The hurdling trio of Milan Young (57.39/PR), Jurnee Woodward (58.68) and Brittley Humphrey (59.05) were the women’s advances to the quarterfinals and the men’s sprinter triumvirate of Jaron Flournoy (10.29), Kary Vincent Jr. (10.38), and Akanni Hislop (10.40) all moved on as well.

Friday’s races will feature 24 athletes and the top 3 from each heat plus the next three fastest times will move on to the NCAA Championships in Austin, Texas.

Julia Palin did not advance to the NCAA Championships in the national semifinal of the 10,000 meter run, but she clocked a personal best and improved her second-best time in school history by four seconds to finish 18th with a readout of 34:34.20.

*First round events that feature 48 athletes – top three from each heat, plus next six fastest times advance to quarterfinal round on Saturday

^Quarterfinal round events that feature 24 athletes – top three from each heat, plus next three fastest times advance to NCAA Championships