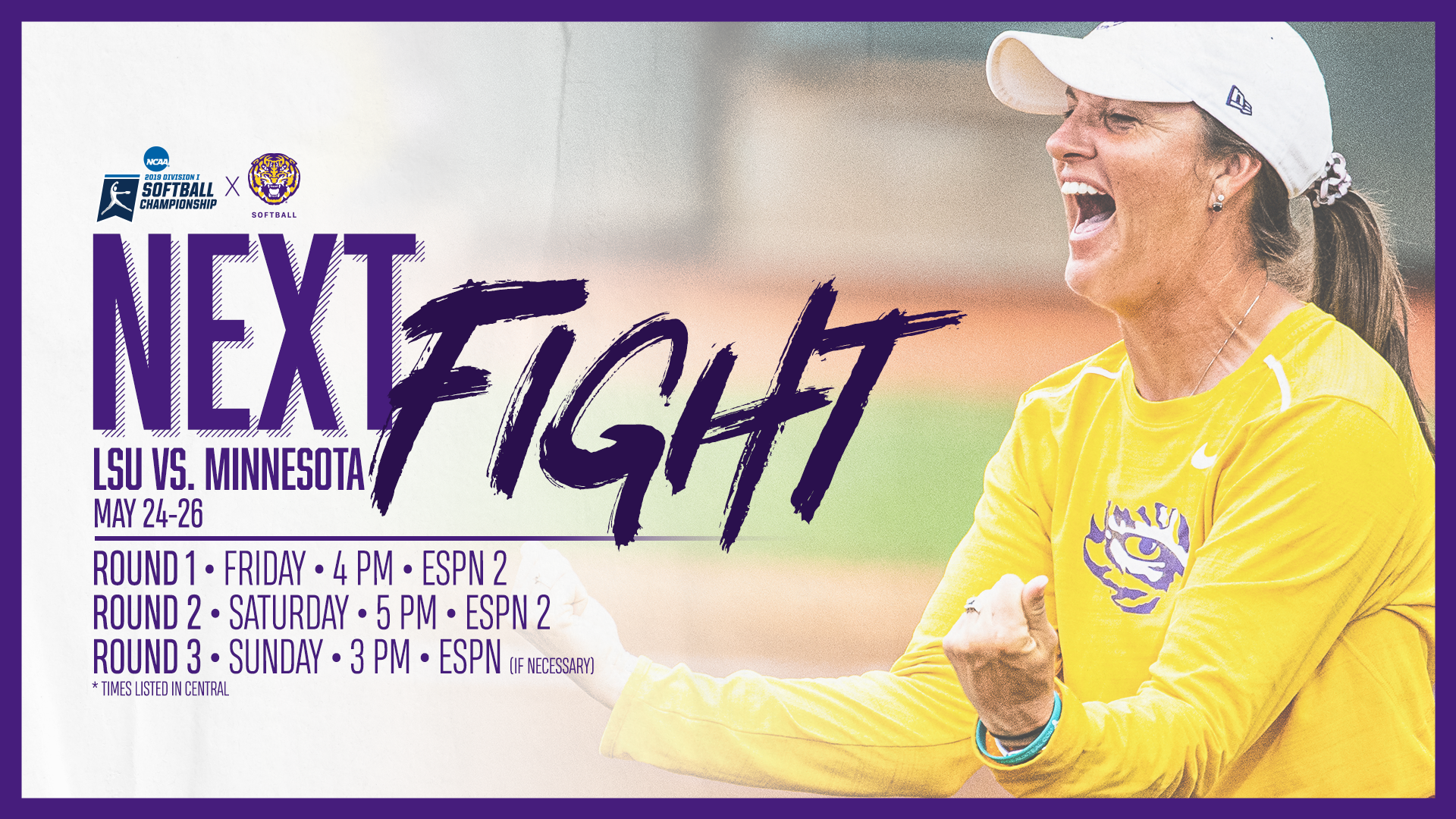 BATON ROUGE – The 10th-ranked LSU softball team will take on No. 7-seed Minnesota in a three-game double elimination Minneapolis Super Regional. The Tigers face the Gophers Friday at 4 p.m., Saturday at 5 p.m. and if needed, Sunday at 3 p.m.

Games one and two will stream live on ESPN2, while the ‘if necessary’ game on Sunday will air on ESPN. Jenn Hildreth and Carol Bruggeman will be on the call this weekend. The games will be available on the WatchESPN app.

About the Tigers
After winning their fifth-straight regional, the Tigers come into the weekend with a 43-17 overall record. The Tigers went 3-1 in the Baton Rouge Regional, taking down Texas Tech in the final game of the weekend to advance. Aliyah Andrews moved into the leader spot at the plate, hitting .367 on the year. She broke the single-season stolen base record on Sunday with her 46th on the year. Amanda Sanchez is right behind with a .364 average.

In the circle, Sunseri leads the staff with a 2.15 ERA. She is 13-9 in the circle with five saves and five shutouts. She leads the staff in strikeouts with 84. Sunseri tied the single-season save record on Sunday, coming in against Texas Tech in the final game for the save. Maribeth Gorsuch got two wins in the regional, including her second postseason shutout of her career. She owns a 2.54 ERA. Shelby Wickersham is 10-2 with a 2.29 ERA.

Scouting Minnesota
Minnesota comes into the weekend with a 44-12 overall record after down Georgia in the Minneapolis Regional finale on Monday. MaKenna Partain is leading the team with a .408 average and has 16 doubles, four triples, five home runs and 13 stolen bases on the year.

The Tigers will face Amber Fiser for most of the weekend. She comes into the Super Regional with a 29-7 record with three season, a 1.18 ERA and 328 strikeouts. Her ERA and strikeout numbers lead the Big Ten.

“I think they’re excited. It’s uncharted territory for a lot of them. None of the girls have been to this part of the country, so I think that’s fun. They get to see a new place and a different scenery, so I think that will be fun.”

“Honestly, we started to get prepared for every team in that Regional just in case. I think we’ll be very prepared. We’ll be ready. There’s a lot of film on them (Minnesota), so we’ll have decent understanding of them. We know they’re very good, they’re very talented, they have an outstanding pitcher on the mound (Amber Fiser) and we’ll go give them our best shot.”

“They have a very good one. They have more power. They don’t really slap or bunt a lot. They’re more of a power type offense and put up some big power numbers.”

“We’ve played against big power offenses all year. We played in the SEC, so our schedule kind of lent itself to this series. I think we’ve played in eight Super Regionals playing in our SEC series that we played all year. Our kids understand what it takes. Our kids have been there and have had a lot of success in three-game series this year, winning the majority of them. They will be in a good spot and will be prepared.”

On how the team builds off the momentum from the Regional…

On Maribeth Gorsuch‘s performance in the Regional…

“We talk to her a lot about being one pitch, one moment away from greatness. She did not necessarily have the year that she wanted, but to get two of the three wins in the Regional shows just how talented she is and how close she was all the time. I think it still is her season and she’ll be bog for us this weekend.”

“I think the key is the depth of our offense. The fact that we’re able to score runs at the bottom of our lineup almost as much as the top at times is huge. Being tough outs one through nine is going to be difficult and when you’re facing a really good solid pitcher, that’s key. We can’t let her have any pitches off. We can’t let her have any bats off. We have to challenge her one through nine in the lineup.”

What’s On Deck
The Tigers have to win two games this weekend in order to advance to the Women’s College World Series. If the Tigers advance, it would be their seventh appearance in the WCWS, fifth under Beth Torina. The WCWS starts next week on May 30.