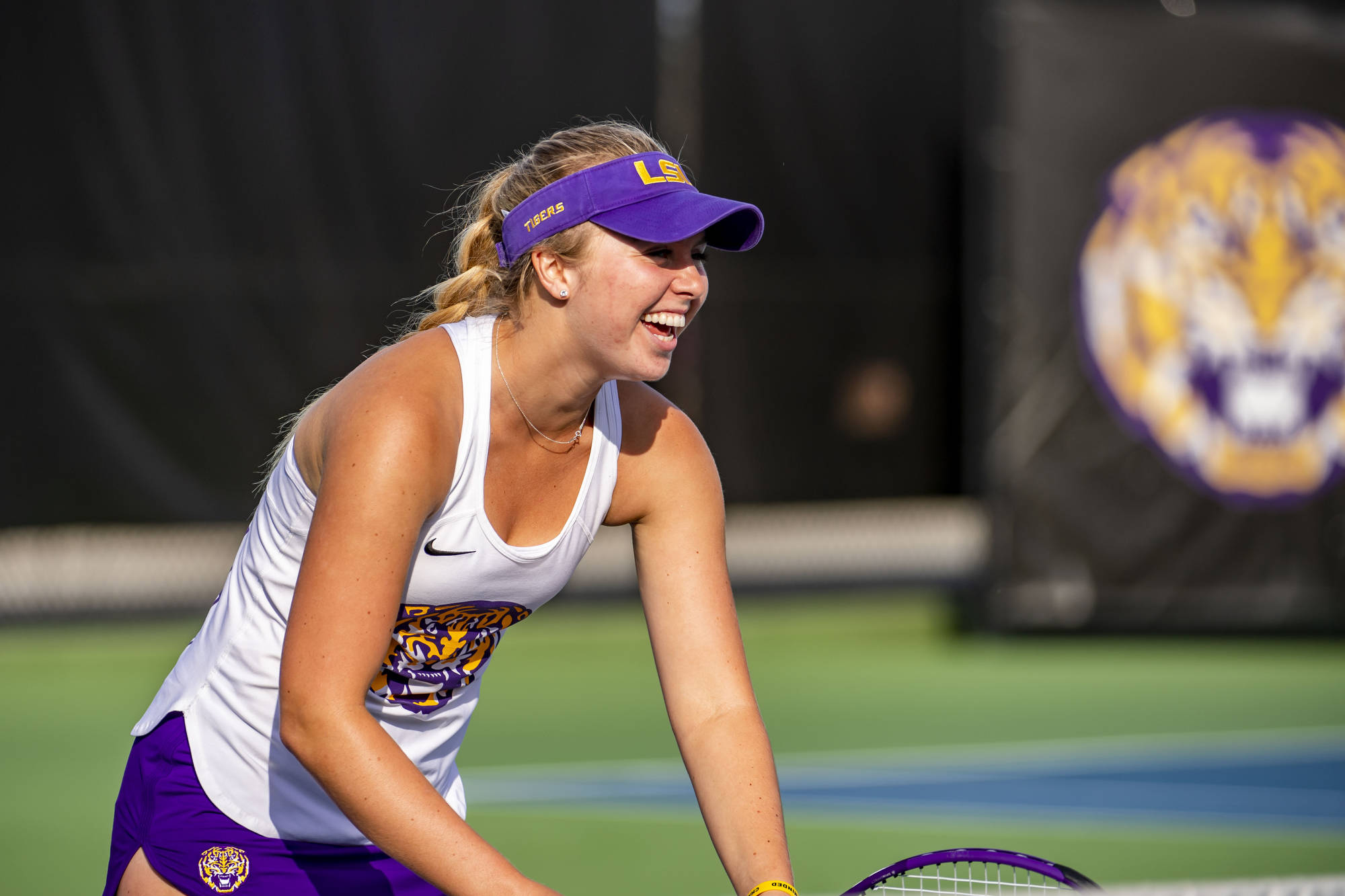 “I swerve around,” she says, her British accent providing a certain coy emphasis on the second word.

If superstition has powered Richardson from the No. 3 singles spot she occupied as a freshman in LSU’s lineup to an All-American and national seed in the NCAA Division I Women’s Individual Championships which start Monday, the line-hopping isn’t all she has in her arsenal.

She puts her water bottles in the same place each time the takes the court. She also touches a specific spot on the back fence.

Of course, there’s more to Richardson’s game than mere superstition. It’s a fine balance of loving her sport and loathing defeat that makes Richardson a threat to not only defend the national doubles championship she and senior Jessica Golovin won last season, but also to make run at the singles title, too.

The 2019 NCAA Division I Women’s Individual Championships begins tomorrow, with @RichardsonEden and Jessica Golovin representing the Purple and Gold in the singles and doubles tournament.#GeauxTigers#NCAATennishttps://t.co/Hxv2ajZRId

She’s done it before, after all, winning both titles at the ITA Southern Regional Championships in October. And after helping the Tigers reach the second round of the NCAA Tournament as the first court singles player and Golovin’s partner for 19 wins in doubles, Richardson is ready to represent the Tigers in Orlando this week on the national stage.

“Here’s a girl who hates losing,” says co-head coach Michael Sell. “She also enjoys what she does. You add in the enjoyment and competitiveness: that’s the perfect recipe for a successful athlete.”

Losing has never sat well with Richardson, from the time she was a young player in Ellesmere Port imitating Rafael Nadal and Serena Williams at the tennis club where her mother worked reception.

“I used to cry on court, throw my racket. I’m a bit calmer now,” she laughs.

The racket throwing and tear pouring have ended, but the hatred for defeat has not.

“I am a terrible loser,” she says. “Even if I know I’ve played well, it hurts me so bad, because I know there’s probably something I could’ve done a tiny bit better.”

Fortunately, Richardson hasn’t done much losing since arriving on campus as a freshman last season. After she and Golovin were one of the final two pairs added to last year’s individual doubles championships, they ran through the field for the first national championship in program history. Though both players are known for their fiery demeanor on court, last year, they played with the sort of freedom anonymity can often offer.

“We were the last team in, so we didn’t really have any expectations,” Richardson remembers. “We could just go out and swing.”

The duo approached the tournament in increments, Sell says. Rather than looking at the long road to the finals, they viewed each match as a miniature mile-marker. First, make All-Americans. Then, make the semifinals. Then, make the finals – and maybe win there, too.

“The first three games of the tournament, we lost,” Sell remembers. “I’m sitting here thinking about flights and stuff.”

The flights waited. The duo regrouped and made their improbable run to the title match, where they dominated with a straight-set win for the championship.

“They played their best match of the year in the final,” Sell says. “It was about as flawless tennis – of execution, of mannerisms, of competitiveness – that I’ve ever seen.”

So impeccable was their play that Sell said almost nothing from the sidelines the entire time. Other than a simple “keep it going” during the first changeover of the second set, he kept quiet. He was no so much rendered speechless by their impeccable play as he was simply letting them stay in the zone they’d found.

“I didn’t want to get in the way, because they were on the right tracks, full steam ahead,” he says. “I was only going to be a distraction.”

With the win came a target, and Richardson feels it both in singles and doubles. She’s firmly established herself as a top player nationally, sitting at 12th in the latest ITA Singles Rankings and claiming wins this season over the players seeded second, third, and sixth in the tournament.

“Because my ranking’s gotten quite high now, people come out and try to beat me, because if they do beat me, their ranking goes up,” Richardson says. “There is a target on my head now, but I like the pressure.”

“She saw herself as one of the top players last year,” Sell adds. “She just had to mentally and emotionally get there and let the tennis do the talking. Now that people are hunting her, she’s embraced that.”

Richardson won’t be alone in either quest. Golovin is also in the singles field for the first time since her freshman season. Both will play their singles opponents Monday before teaming back up to begin the defense of their doubles title Tuesday.

Both have familiar foes Monday, too. Golovin faces off against Hawaii’s Petra Melounova, who fell to former Tiger Joana Valle Costa in the 2017 NCAAs. Richardson, meanwhile, has a re-match with San Diego’s Solymar Colling, who knocked her off in LSU’s win over San Diego in the NCAA Tournament on May 4.

Sell is looking for simplicity out of Richardson this week, whether it’s singles or doubles – and a few smiles.

“Whatever it takes to hear that distinct laugh she has, that’s knowing Eden’s in the right spot mentally – if she’s happy and giggling,” Sell says.

And hopping over those lines.