Marceaux Shines as No. 19 Baseball Takes Series Over AU 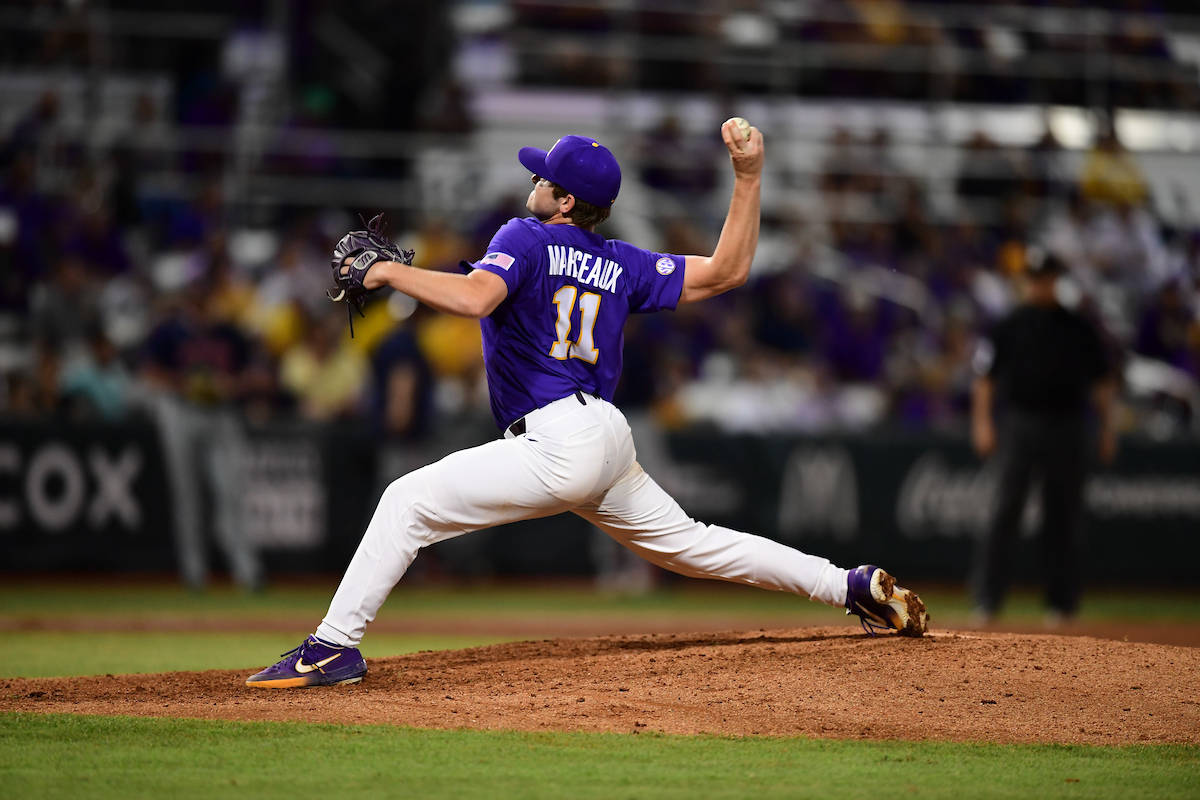 BATON ROUGE. – Behind a career-high seven strikeouts in seven innings from freshman right-hander Landon Marceaux, the No. 19 LSU baseball took the series against Auburn with a 4-1 win Friday night in Alex Box Stadium, Skip Bertman Field.

Marceaux was stellar on his way to improving to 4-2 on the year by limiting Auburn to one run on two hits and not issuing a walk.

The game marked the first time since March 8 and March 11, 1989, that LSU recorded consecutive two-hitters or better when Curtis Leskanik and Ben McDonald threw a pair of one-hitters against New Orleans and Florida.

“The most thrilling thing, maybe in a long time, was the effort of Landon Marceaux,” head coach Paul Mainieri said. “To see a young kid under these conditions tonight, a lot of pressure on him, he went out and absolutely dominated the game. I think we would have seen him pitch like that several times during the regular season had he not dealt with arm soreness. Now he’s feeling healthy, and he’s developing because he’s getting opportunities to go out there and pitch. He could have continued, but I decided to take him because seven innings of outstanding baseball was enough. He’s got to come back on short rest if we’re fortunate enough to win on Tuesday.”

The SEC regular season finale between LSU and Auburn is scheduled for a 2 p.m. CT first pitch Saturday in The Box. The game will be available online only through the SEC Network+, and fans can listen to it on the LSU Sports Radio Network, including 98.1 FM in Baton Rouge.

Zack Hess earned his second save of the year after throwing two shutout innings and striking out two.

Auburn southpaw Jack Owen falls to 4-2 on the year after allowing four runs on eight hits, walking one and striking out six in seven innings.

It was a scoreless game entering the bottom of the fourth inning before LSU put up four runs to grab the 4-0 lead. With the bases loaded and one out, designated hitter Cade Beloso was hit by a pitch to drive in right fielder Antoine Duplantis, who led off the inning with a single to left field, and left fielder Daniel Cabrera easily scored from third on a wild pitch in the next at-bat.

With two outs, catcher Saul Garza ripped an infield single to second base to score third baseman Hal Hughes, who hit a single to right field earlier in the inning. Shortstop Josh Smith followed by placing a ball just over the shortstop’s glove into left field to bring in Beloso.

Auburn shortstop Will Holland responded by leading off the top of the fifth inning with a solo home run to dead center, cutting the LSU advantage to three runs, 4-1.

The Bayou Bengals tacked on an insurance run in the bottom of the eighth to make it a 5-1 game when Beloso drove in first baseman Chris Reid, who drew a one-out walk earlier in the inning.