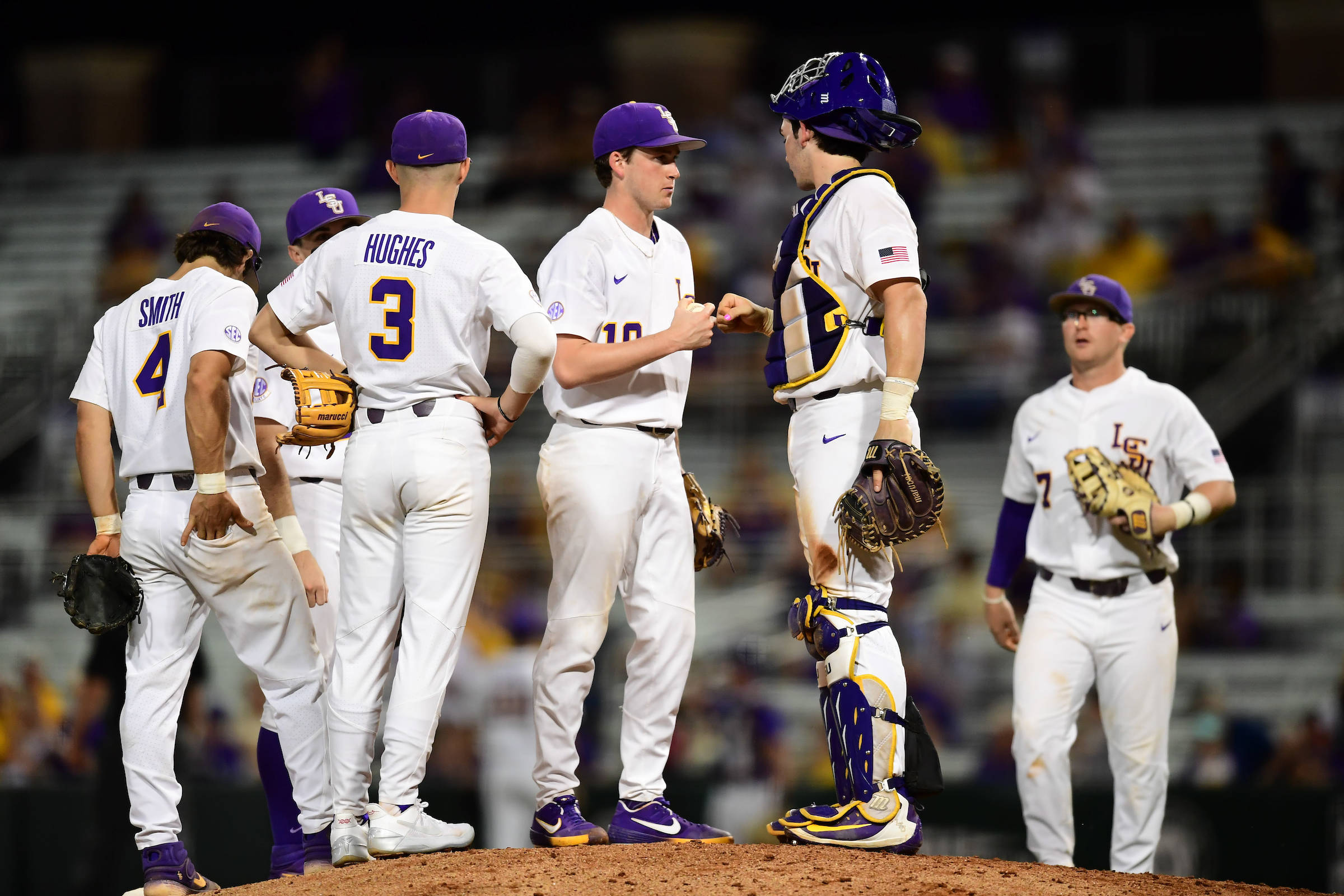 As Saul Garza scooped the final pitch of LSU’s 7-1 win over Auburn from the dirt, completing the game-ending strikeout, he tucked the baseball in his back pocket.

The plan was to gift it to Eric Walker, whose six innings of one-run, two-hit pitching provided the platform for a vital win in LSU’s quest to host a regional.

But if Walker refused it and told his catcher to keep the prize, one could certainly understand.

While Walker dazzled on the hill, Garza powered the Tigers from the batter’s box, behind the plate, and on the basepaths.

His 3-for-4 night featured a 437-foot homer over the left field fence, his fourth in eight games and his fifth of the season.

“I didn’t check the scoreboard,” Garza said, “but some of my teammates said it went over 400 feet. It felt good off the bat.”

It looked good, too. Garza has pelted that scoreboard on a daily basis in batting practice, but showcasing his impressive power in games took time. After hitting 20 home runs in junior college last year, Garza went 24 games to start his LSU career without a single hit clearing the fence.

Now, he can’t stop hitting homers. In his last eight games, Garza is hitting .333 (10-for-30) with four homers and seven RBI, while slugging .733 from the bottom of the Tiger order.

“He’s been swinging the bat really well,” head coach Paul Mainieri said. “That was a long one. It would be really beneficial to our team if Saul Garza has a lot of days like that the rest of the year.”

Garza’s impressive performance extended into an unexpected aspect of his game. His third-inning, two-out single was the Tigers’ first hit of the game, and two singles later, he came around to score the tying run on a Zach Watson single to left field.

Watson squared the ball up, and Auburn’s left fielder came up with it clean, but third base coach Nolan Cain sent the less-than-fleet-of-foot Garza without hesitation, and the barrel-chested catcher barreled into home with a headfirst slide in plenty of time to tie the game.

“I felt like I got a decent jump,” Garza said. “I know the throw was off line a little bit. I just saw Coach Cain waving me in, and I didn’t hesitate. I don’t have the best wheels on the team, so when he gave me that sign to go, I tried to take advantage of it as best as I can.”

His slide into home plate was as good as his play behind it, too. He nabbed an Auburn runner at third with a perfect throw after blocking a Walker breaking ball in the fifth inning, keeping the sophomore starting pitcher out of trouble.

Walker didn’t need much help Thursday. He gave LSU one of his best starts of the season and became the first starter to get beyond the fifth inning since Cole Henry on April 6.

Oddly enough, the night didn’t begin well for Walker, who needed 28 pitches to get out of the first inning and gave up a run in the second on a triple that nearly left the yard and a sacrifice fly.

But the third-year starter composed himself and gave the Tigers exactly what they needed: a quality start.

“I kind of came in the dugout, regrouped and took a deep breath,” Walker said. “The best I’ve done this year is when I’ve relaxed and not tried to do too much. I was just trying to do too much is the bottom line. From there on out I felt much better and much more in control.”

Like Garza, Walker is rounding into his best form late in the season. He’s 3-1 in his last five starts, with a 3.51 ERA and a .198 batting average against.

From the dugout Thursday, Mainieri could tell Walker didn’t have his best stuff. In fact, he thought Walker had better stuff last time out, when he pitched 4.1 innings against Arkansas.

“I didn’t think had that great of an overpowering fastball,” Mainieri said. “I don’t know that his stuff was quite as good as it was last item against Arkansas, but he got in a groove, and he found it.

“Sometimes, I look at Eric, and I’m like, ‘How do you do it?’ He doesn’t have a spectacular breaking ball or changeup, certainly not an overpowering fastball, but you look up in the sixth inning, and the kid’s given up three runners. He’s just that wily competitor. He’s got so much moxie, composure, and poise. He just battles ’til the end.”

Most important in Walker’s start was the domino effect on the Tiger bullpen. Todd Peterson needed just over 22 pitches to get through two innings, meaning he could come back later this weekend and throw. And as the Garza-powered offense extended the lead, Mainieri was able to save other important arms LSU will need not just to close out the weekend, but also early next week when the SEC Tournament gets started Tuesday.

A win for LSU, a game ball for Walker, and a game to remember for Garza.