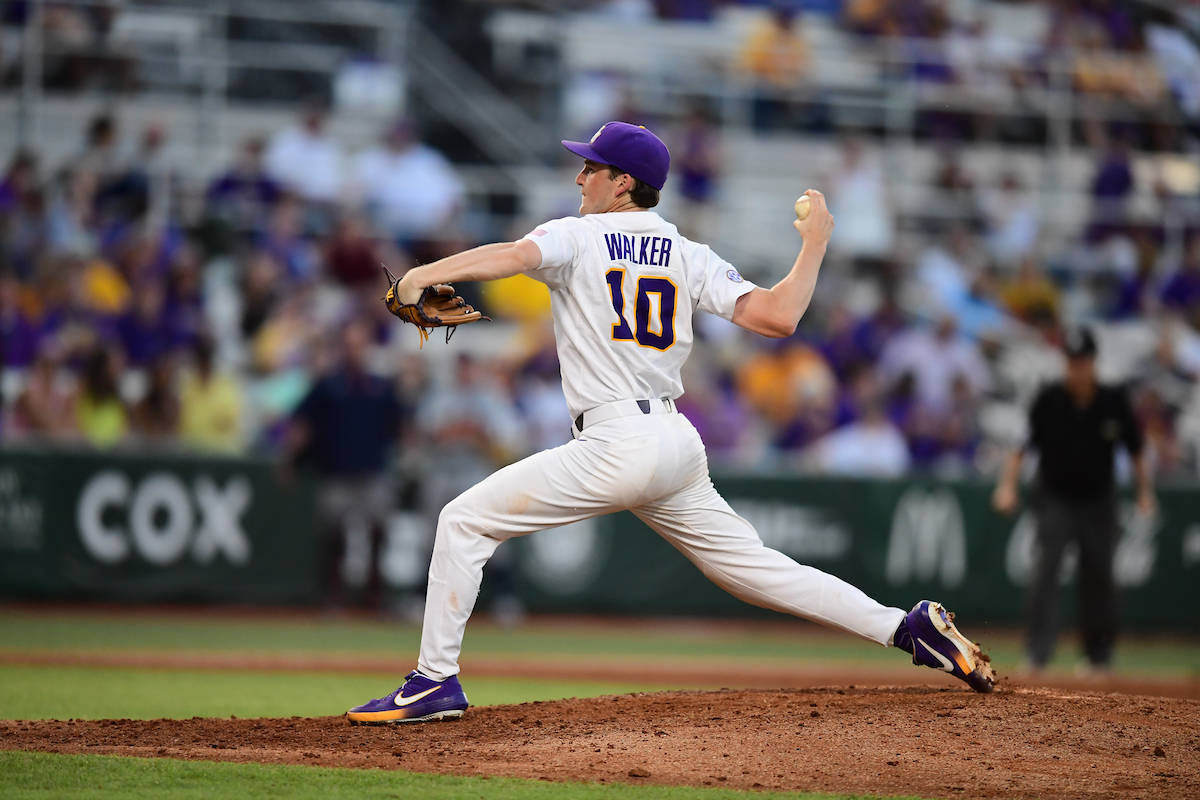 Game 2 between LSU and Auburn is slated for a 7 p.m. CT first pitch Friday in The Box. The game will be available online only through the SEC Network+, and fans can listen to it on the LSU Sports Radio Network, including 98.1 FM in Baton Rouge.

Walker improved to 5-4 on the year after firing six dominant innings. The sophomore-right hander allowed one run in the second and settled in to limit Auburn to two hits, walked three and struck out five.

Walker, Peterson and George combined to limit Auburn to two hits, marking the first time LSU held an opponent to two hits in an SEC game since May 13, 2017, when the Tigers allowed two hits versus Auburn in a 9-1 victory. Walker was also the winning pitcher on that day, allowing one hit in eight innings of work.

“I thought Eric wasn’t absolutely sharp in the early part of the game,” said LSU coach Paul Mainieri, “so I was a little concerned about how long he could go after the second inning. But, he really settled in starting with the third inning, and in the third, fourth, fifth and sixth innings, he was as sharp as could be. He was placing his fastball where he wanted to, and the hitters just couldn’t get good swings against him.”

Elliott Anderson suffered the loss, dropped to 5-2 on the season and allowed five runs—four earned—on eight hits and struck out one in 3.2 innings of work.

“We had a lot of big hits in the third inning to give us the lead, and Walker just started dealing,” Mainieri said. “We hit three solo homers to tack on some runs and came away with an important victory.”

In the bottom of the third inning, the Bayou Bengals recorded five consecutive hits with two outs to take the 4-1 lead. The rally started when catcher Saul Garza singled up the middle and shortstop Josh Smith followed with a base hit through the right side.

Center fielder Zach Watson slapped one to left field to bring in Garza, and Smith scored on right fielder Antoine Duplantis‘ base hit to right field before left fielder Daniel Cabrera drove in Watson. A fielding error by the shortstop allowed Duplantis to come home and give LSU the three-run lead.

LSU added on to its lead in the fourth when designated hitter Cade Beloso went yard to lead off the inning with his ninth home run of the season to extend the lead to 5-1.

With one out in the bottom of the sixth inning, Garza demolished a ball for his fifth home run of the season over the Left Field Landing, and Duplantis led off the seventh with his 11th dinger this year to make it a 7-1 game.