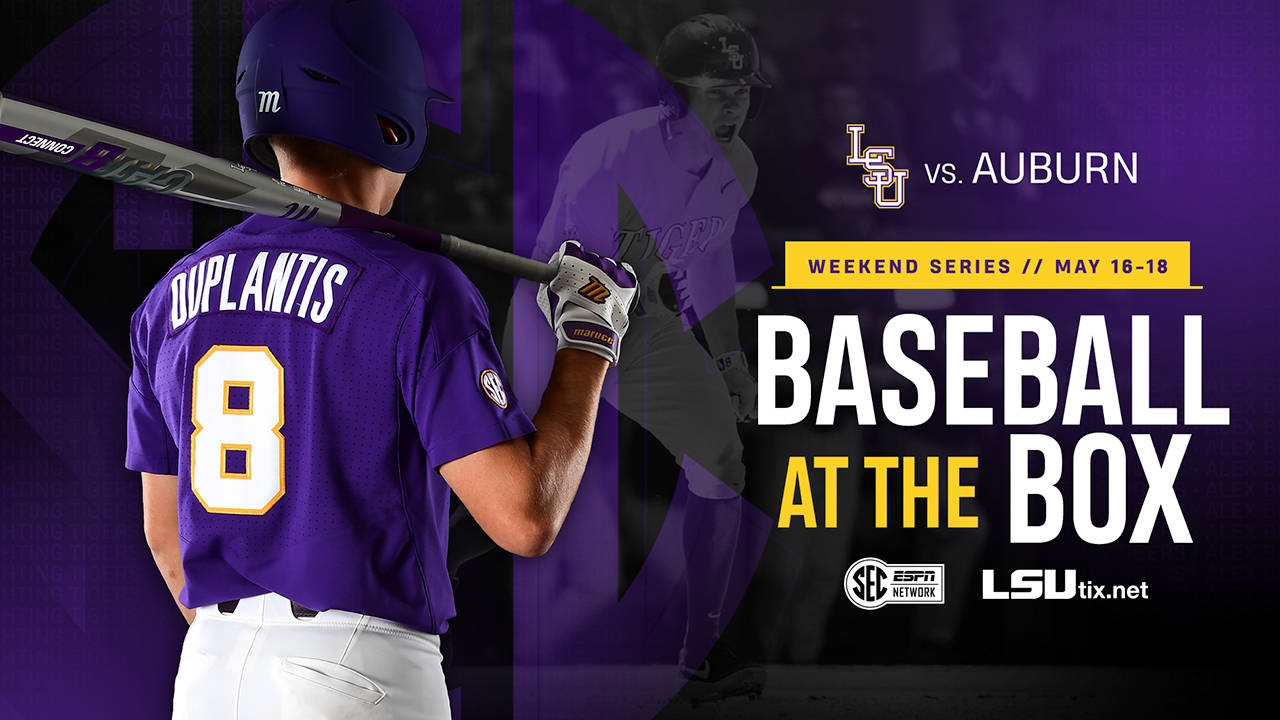 TICKETS
Visit www.LSUtix.net or the StubHub Marketplace on your desktop or mobile device

SPECIAL EVENT
Saturday will be Senior Day at the stadium, as the LSU senior players, student equipment managers and student trainer will be honored prior to first pitch

SERIES RECORD
LSU has a 103-74 advantage over Auburn in a series that began in 1907. LSU has won 15 of its last 19 games versus Auburn, but Auburn won two of three games over the Tigers last season at Plainsman Park. LSU has captured 13 of the last 20 SEC regular-season series between the clubs, dating back to 1999. LSU had won five straight series over Auburn before AU’s series victory last season. LSU coach Paul Mainieri has a 25-12 career mark against Auburn.

QUOTING PAUL MAINIERI
“I think we’ve got a shot at hosting a regional if we have success over the next two weeks. We’re just going to take them one game at a time against Auburn; they’re a great ball club. They’ve got their top two pitchers back now after they were injured earlier this season. They’ve got a very good closer and a real solid lineup, so we’re going to be challenged, no question about it. We’ve got three big ball games in our stadium, the weather is going to be great, and I hope we can create a lot of excitement for our fans.”

ABOUT LSU
• The Tigers are No. 21 in the latest NCAA RPI rankings … LSU has 17 wins over Top 50 RPI teams, which is the fifth-highest total in the nation
• Senior rightfielder Antoine Duplantis has homered in each of LSU’s last two games, including a three-run blast in the eighth inning Saturday to lift LSU to a 3-2 win over fourth-ranked Arkansas … Duplantis has two doubles, two homers and six RBI in LSU’s last five games
• Antoine Duplantis is No. 2 on the career LSU hits list with 337, 15 hits behind former first baseman Eddy Furniss (352 hits from 1995-98) … Duplantis already holds LSU’s record for career at-bats (1,048), and he shares the school’s triples record (15) with former second baseman Todd Walker (1992-94)
• Junior right-hander Todd Peterson delivered a brilliant relief performance in Saturday’s win at Arkansas … Peterson entered the contest in the fifth inning and fired four shutout innings, limiting the Razorbacks to one hit with two walks and three strikeouts
• Freshman right-hander Landon Marceaux delivered his best outing of the season last Saturday at Arkansas, as he worked five innings and limited the Razorbacks to two runs on seven hits with three walks and two strikeouts
• Sophomore leftfielder Daniel Cabrera has two doubles, three homers and six RBI in the Tigers’ last five games … Cabrera launched a pair of solo homers in last Thursday’s game at Arkansas, marking his second two-homer game of the season .. he also blasted two dingers in the Tigers’ season opener on February 15 versus Louisiana-Monroe

ABOUT AUBURN
• Auburn is in sixth place in the SEC Western Division with a 13-14 league mark
• Auburn is No. 8 in the SEC in team batting average (.270), and AU has 36 home runs with 58 steals in 71 attempts
• The Auburn pitching staff is No.10 in the SEC with a 4.45 ERA … sophomore right-hander Tanner Burns is No. 5 in the SEC in strikeouts with 91
• Auburn is led at the plate by junior infielder Conor Davis, who is batting .304 with nine doubles, one triple, six homers and 32 RBI … sophomore infielder Edouard Julien has team-highs of eight homers and 44 RBI