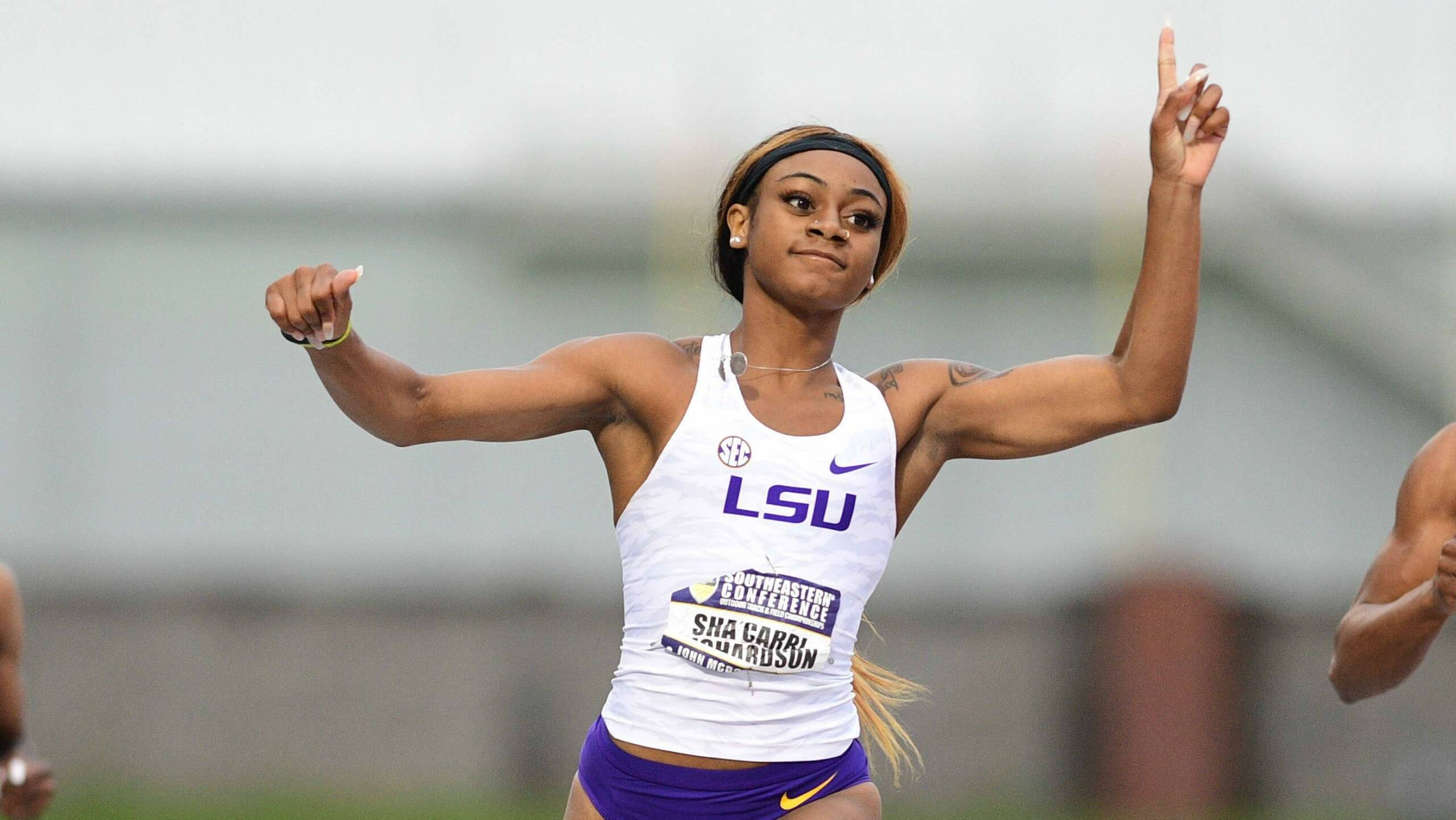 Baton Rouge, La. – LSU track and field freshman sprinter Sha’Carri Richardson made her first-career appearance on The Bowerman Watch List Wednesday afternoon. Richardson was named to the post-conference edition of the watch list.

Richardson amassed the most points of any sprinter at the SEC meet last weekend with 22.5 total points. She won individual titles in the 100 and 200 meters, and she anchored the women’s 4×100 meter relay to its fourth-straight title at the SEC meet.

Saturday served as the final day of the SEC meet and Richardson was pretty busy to say the least. Her evening started with the 4×100 meter relay at 5:15 p.m. Richardson, as she has done four times this year, chased down an opposing anchor leg and sealed the deal for the women’s 4×100 meter relay with a season best of 42.93 to rank No. 2 in the NCAA in the event.

She then had an hour to rest before she turned her focus to the 100 meters. Only two LSU freshman had ever won the SEC 100 meter title during the first year on campus with Peta-Gaye Dowdie (1997) and Muna Lee (2001) accomplishing the feat, but that changed after Richardson’s triumph. Richardson got out of the blocks nicely and was even with the field through the first 60 meters of the race until she turned her afterburners on to pull away with the dub and claim her first-career SEC individual title. Richardson ran a wind-aided time of 11.00 to register the third-fastest time in the nation this season in the win.

The native of Dallas, Texas, would be tested one more time on the evening with the 200 meter final at 7:35 p.m. CT. Richardson stormed out of the blocks and built a commanding lead through the first 150 meters of the race and she was able to hold off Kentucky’s Abby Steiner for the triple. Richardson finished with a personal best of 22.57 to claim the victory by two-hundredths of a second; the 22.57 also ranks No. 3 in the NCAA.

Richardson joined some elaborate LSU company by pulling off the 100, 200, and 4×100 meter relay triple at the SEC Championships. Dawn Sowell, the collegiate record holder in the 100 meters, achieved the feat in 1989, Esther Jones did it in back-to-back years in 1990 and 1991, and 2012 Bowerman winner Kimberlyn Duncan claimed the trifecta in 2012.

Richardson has been phenomenal this season against collegiate competition as she has claimed titles in seven of her eight individual races this season. She owns four titles in the 100 meters with wins at the Texas Relays (10.91/+4.3 wind), the LSU Alumni Gold (11.12/+2.8 wind), the LSU Invitational (11.06/+2.4 wind), and the aforementioned win at the SEC meet. Her win at the Texas Relays was the third-fastest all-conditions time by an U20 athlete in world history. In the 200 meters, she has won three of her four races with wins of 22.99 at the Hurricane Invitational, 22.78 at the LSU Invitational, and the SEC 200 title. She has also anchored the women’s 4×100 meter relay to five titles this season.

The Bowerman, track & field’s equivalent to the Heisman Trophy, features the best 10 women and 10 men athletes in America. The men’s version of this list will be announced tomorrow afternoon. Richardson is the sixth woman in LSU history to be recognized by The Bowerman joining the likes of Mikiah Brisco, Kortnei Johnson, Aleia Hobbs, Kimberlyn Duncan, and Semoy Hackett.