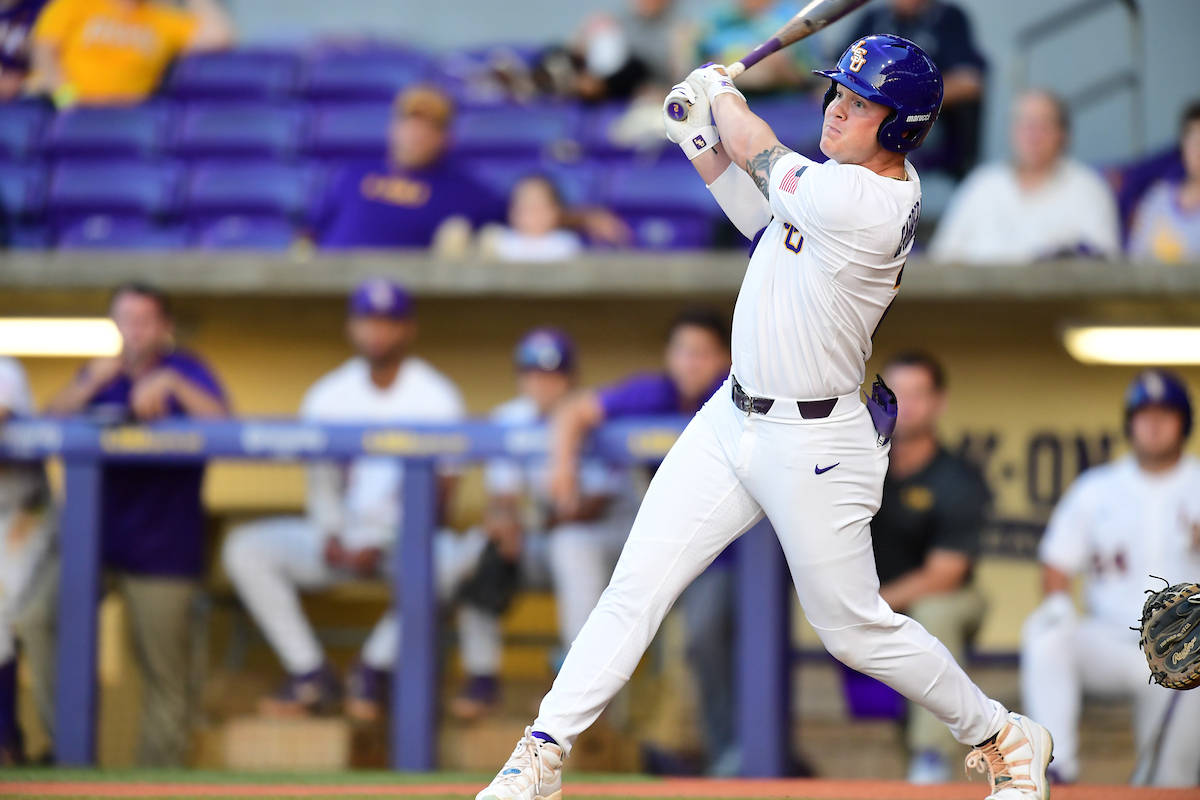 LSU will host Auburn in the final weekend of SEC play beginning Thursday at 6:30 p.m. CT in The Box. All three games will be available online only through the SEC Network+, and fans can listen to them on the LSU Sports Radio Network, including 98.1 FM in Baton Rouge.

“I wanted the focus of our players to be as intense tonight as it would be on Thursday night when we face Auburn,” said LSU coach Paul Mainieri. “I wanted to see the attitude of the team be very intense tonight, and I thought it was. Our hitters were up there battling hard, we made some good plays on defense, and we played a pretty crisp game.

“Our pitching was challenged, but we grinded through it, and it feels good to win an important game. If we wanted to have any thoughts of hosting an NCAA Regional, we had to win this game tonight.”

Matthew Beck earned the win for the Tigers and improved to 3-0 on the year after shutting out the Privateers across two innings. The right-hander gave up two hits, walked to and struck out two.

Zack Hess entered with two outs in the eighth inning and earned his first save of the year, allowing two runs on two hits, walking one and striking out three in his 1.2 innings.

The loss was charged to Cortlynn Ramirez who fell to 1-3 after allowing five runs—one earned—on eight hits, walked two and struck out one in five innings.

UNO took the 2-0 lead with one out in the top of the second inning when third baseman Antonio Gauthier homered to left field and drove in right fielder Pearce Howard who singled up the middle to lead off the inning.

With the bases loaded and no outs in the bottom of the third inning after third baseman Hal Hughes walked, catcher Brock Mathis was safe on a fielder’s choice and shortstop Josh Smith‘s base hit to right field, second baseman Brandt Broussard grounded into a double play, which allowed Hughes to touch home.

Rightfielder Antoine Duplantis slapped a single to the left side to drive in Mathis and set up a two-run home run by left fielder Daniel Cabrera, his team-best 12th of the season, to put the Tigers up 4-2.

Privateers second baseman Salo Izo hit a solo shot to left field with two outs in the top of the fifth to cut the LSU lead to 4-3.

In the bottom of the fifth inning with one away, Duplantis slapped the first pitch he saw into the Diamond Deck in right field to extend the LSU lead back to two runs, 5-3.

With two outs in the bottom of the eighth inning, third baseman Hal Hughes ripped a RBI single to right field to bring in first baseman Chris Reid. After the Tigers loaded the bases, Smith drew a bases loaded walk, which scored center fielder Zach Watson to extend the LSU lead to 7-3.

Gauthier hit his second home run of the night in the top of the ninth inning, a two-run blast, which finalized the score, 7-5.