Todd Peterson Wants The Ball, No Matter the Stakes 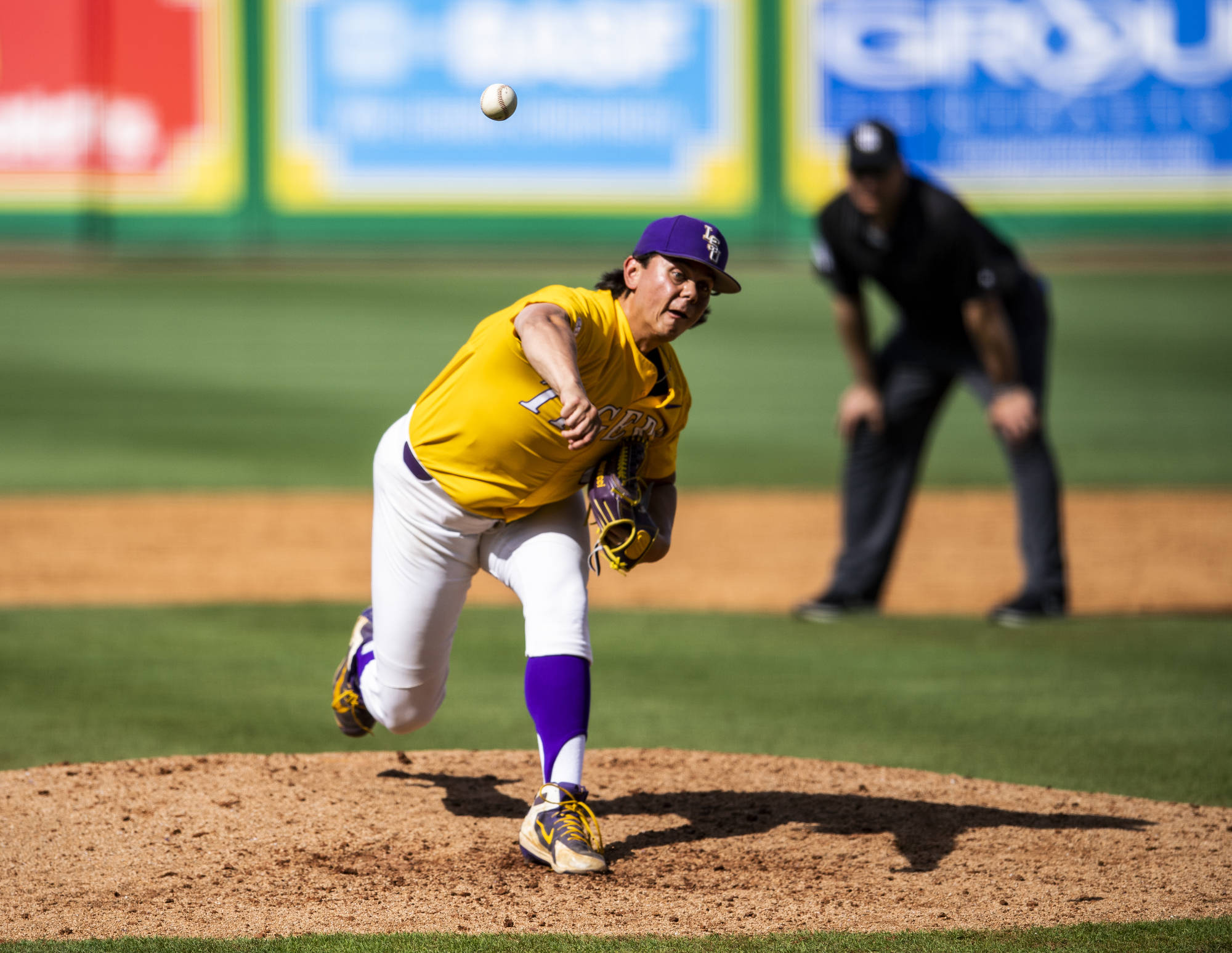 Seconds after striking out the last batter in Saturday’s win over No. 4 Arkansas, Peterson beat his chest and stormed off the field, thrilled to help the Tigers pick up a much-needed road win.

Minutes later, he was talking to Paul Mainieri.

Still later, he was pumping iron.

“After that ninth inning, we came out, and we were walking in the tunnel, and I looked at Coach, and I was like, ‘Coach, dude, I got five more in me,’” Peterson said Monday. “As soon as the game was over, I went into the room where we showered, and they had a weight room in there, and I started pumping out some curls. I was just amped up.”

With good reason. Peterson’s four innings of one-hit, scoreless pitching propelled LSU to a 3-2 win over the Razorbacks and restored their chances of hosting a regional in the NCAA Tournament. The only hit he surrendered was against the first batter he faced in relief in the sixth inning, which loaded the bases with nobody out and the Tigers down 2-0.

Staring a sweep in the face, LSU needed Peterson’s best at that moment, which came after two of his worst appearances of the season. He’d given up four earned runs and five hits in his last 4.2 innings, seeing his ERA increase from 3.46 to 4.11. The Tigers, meanwhile, were just a few outs away from a fifth-straight defeat.

The junior bore down. He induced a fielder’s choice to second base to nab the first out of the inning at home and a 5-1-3 double play to end the inning. Four innings, three strikeouts, and one vital win later, Peterson was cranking out bicep curls, and the Tigers were leaving town with a win.

TIGERS WIN! TIGERS WIN! @Todd_Peterson3 strikes him out and the Tigers complete the comeback! #GeauxTigers pic.twitter.com/t0iBYpUKjx

“It was huge,” Mainieri said of Peterson’s heroics. “I’m a big Todd Peterson fan. I always have been. He’s had a few outings that have been less than he would expect from himself. Everybody wants to give up on him. I don’t give up on kids like Todd. His enthusiasm, his dedication, his work ethic. He wants it. Bad.

“He’ll always take the ball. He’ll take the ball in any situation. I love the kid. You’ve got to live and die with the positives and negatives with him. I knew he was capable of doing what he did. He’s done it before for us.”

As the Tigers enter the final SEC series of the season this weekend against Auburn at home, Peterson has emerged both as the best option out of the LSU bullpen and a vital leader in the clubhouse. Traditionally at his best later in the season, Peterson’s saved his top stuff for SEC play, posting a 2.45 ERA with 18 strikeouts and just four walks in 22 innings.

That, despite those two shakier outings against Ole Miss and Alabama. Peterson said he uses those sorts of struggles as fuel for his already-blazing fire.

“Everybody’s had failures in life,” he said. “I’ve been playing this game since I was nine years old. I’ve been having troubles and ups and downs since then. You learn from those mistakes and failures and build off of those.

“I don’t know motivates me more, success or failure. Either way, I get out there with the edge to get better every day.”

That edge manifests itself both as a pitcher and a leader. He’s among the most emotional members of a team filled with laid-back ballplayers. As he showed storming off the mound Saturday – or hitting the weights minutes later – Peterson’s not afraid to wear his heart on his sleeve.

“You can always use emotion,” he says.  “It makes the game fun. It makes the crowd get in it more.

“I love bringing the energy. You guys know that. You’ve seen emotion from me plenty of times. I think that’s something I do well.”

As Saturday proved, he also pitches well – especially in big moments. And with the Tigers needing a few more wins down the stretch to position themselves optimally for a postseason push, there are more big moments to come.

That’s perfect for Peterson. He feels like he’s just getting revved up.

“I feel like I’ve got a lot in the tank right now,” he says. “When it’s win a ballgame or go home, your season’s over, I feel like I find a way to step it up to another level.