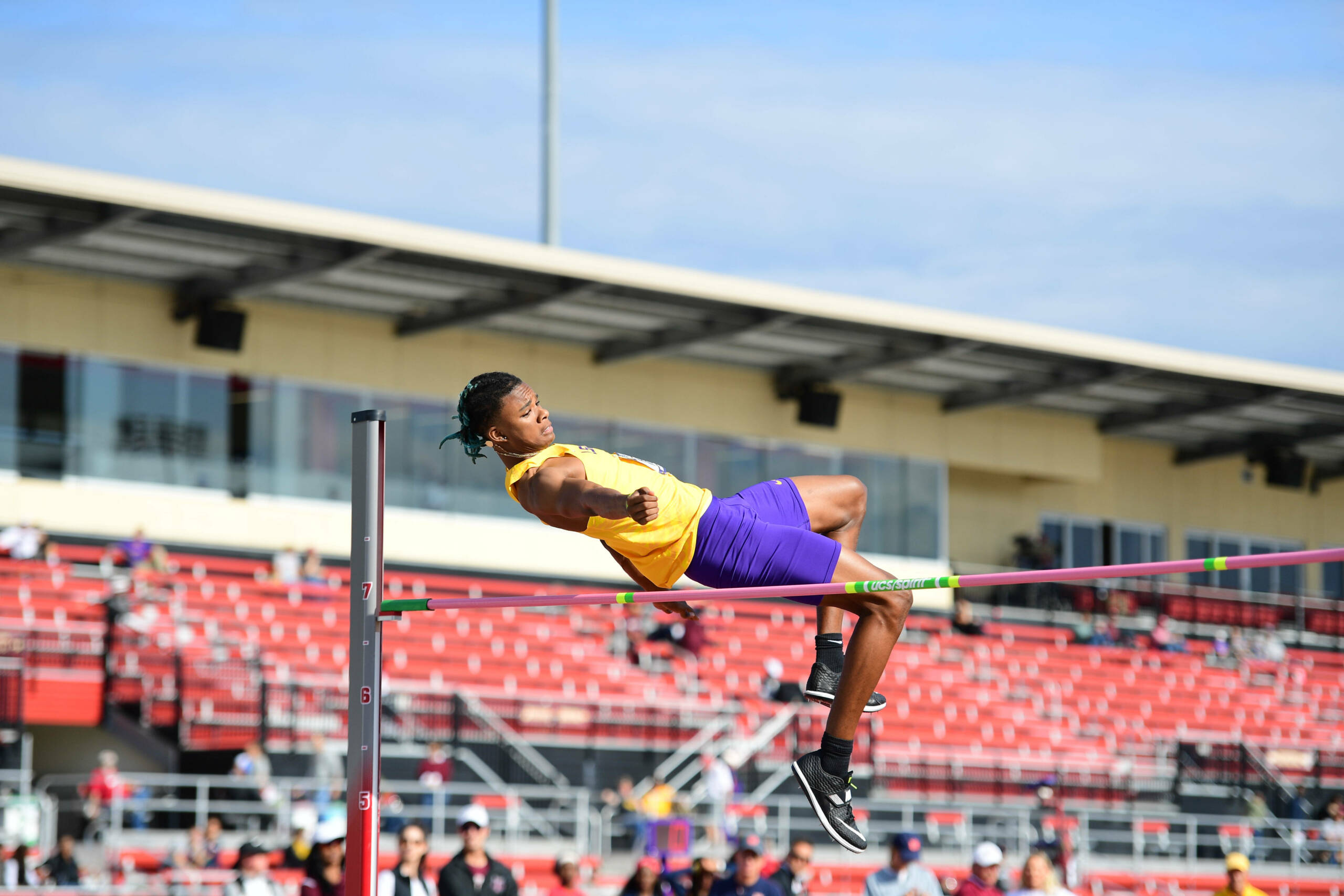 Fayetteville, Ark. – JuVaughn Harrison amassed 18 points for LSU on day two of the SEC Championships with brilliant performances in the high and long jump on Friday evening at John McDonnell Field as he won his second-career SEC title in the high jump and earned runner-up honors in the long jump.

Harrison started his day off at the high jump at 5 p.m. in what would turn out to be a career day. After missing his first two opening heights at 6′ 9.50”, Harrison regained his composure and cleared the must-make bar on his third attempt and cruised through the next two bars at 6′ 11.50” and 7′ 1.50”. After faltering twice at the height of 7′ 3” twice, he cleared that on his third attempt to stay alive. Then came the height of 7′ 4.25” (2.24 meters) with five competitors still remaining. Harrison cleared the 7′ 4.25” bar on his second attempt and none of the other four athletes could get over the bar to make Harrison the champion. With the win, Harrison earned the SEC indoor/outdoor sweep in the high jump and he became the first LSU athlete to win the outdoor SEC high jump title since Tom Lange did so in 1990.

Harrison had a bit of a break before his long jump flight began at 7:55 p.m. Harrison and junior long jump Rayvon Grey would combine to score 13 points for the Tigers after it was all said and done in the event. Harrison earned a silver medal with a mark of 8.02 meters (26′ 3.75”) on his second attempt of the event. Grey saved his best for last with a 25′ 10.75” (7.89 meter) bound in the sixth and final round to bump himself up from sixth place to fourth place.

The No. 2 LSU men’s team has accumulated 28 points through eight scored events and have 12 finalists competing on the track Saturday in addition to solid scoring opportunities in the pole vault and triple jump. The 28 points have the men’s squad in a three-way tie for fifth at 28 points. Florida, the reigning SEC champion, currently has the team lead with 37 points.

The final scorer on day two of the SEC Championships was Lisa Gunnarsson in the women’s pole vault. Competing for the first time since January, the Virginia Tech transfer cleared the second highest height in school history, 13′ 7.75” (4.16 meters), to take sixth place in the event and earn three points for the women.

The rest of the day featured a plethora of more qualifying for LSU. The Tigers advanced three athletes each to the finals of the women’s 100 meter hurdles and men’s 100 meter dash. Jaron Flournoy had the quickest qualifying time of the day for LSU in the 100 meters with a readout of 10.29, and he was joined in the finals by Kary Vincent Jr. (10.36) and Akanni Hislop (10.37); Hislop will be tripling up on Saturday as a finalist in the 100 and 200 meters individually and running as member of the 4×100 meter relay. The women’s hurdling trio of Tonea Marshall (12.83), Brittley Humphrey (13.22) and Milan Young (13.29) did what was needed to advance in the 100 meter hurdles; Humphrey and Young will be competing in both the 100 and 400 meter hurdles on Saturday.

In the men’s 400 meter dash, Tyler Terry used a time of 46.24 to win his heat and auto-qualify for Saturday’s finals, and Raymond Kibet checked in with a 46.67 to move on. In the 100 meter dash on the women’s side, freshmen Sha’Carri Richardson (11.25) and Ariyonna Augustine (11.59) both advanced, and the final qualifier of the day was Damion Thomas in the 110 meter hurdles with a readout of 13.57.

Saturday’s final day of competition will be aired live on the SEC Network from 5-9 p.m. CT. A full list of athletes competing tomorrow can be found below.