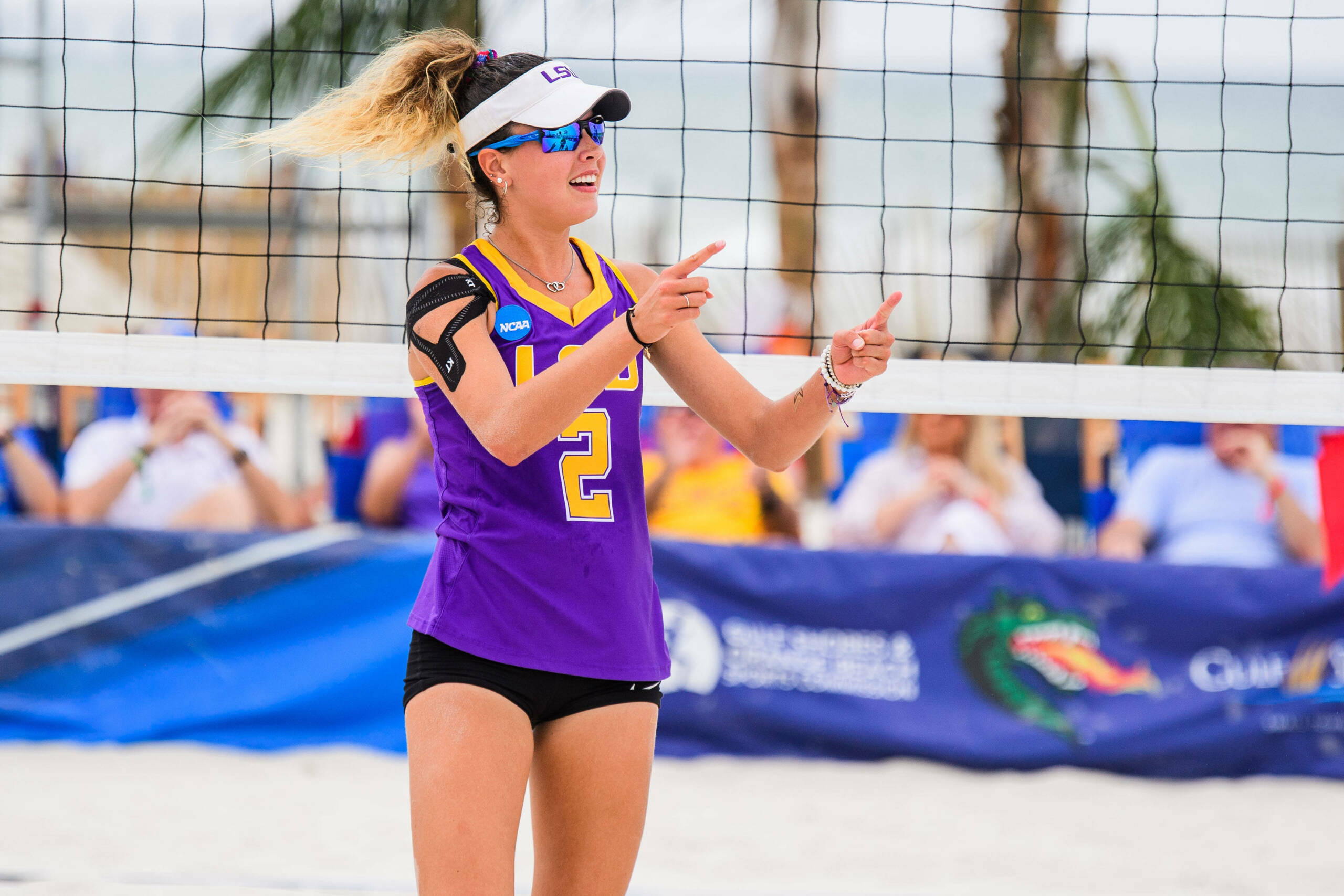 HERMOSA BEACH, Calif.– Playing against top pairs around from around that nation, four of LSU’s five beach pairs in competition at the USAV Collegiate Beach Championship advanced on Thursday.

Every pair that finished in the top three of its respective pool will advance to Friday.

Entering as the top seed of the tournament, Claire Coppola and Kristen Nuss would handle the Nourse sisters from Santa Ana College of Audrey and Nicole in straight sets, 21-7 and 21-14, advancing the Pool A final.

In the other opening match of Pool A, Ashlyn Rasnick-Pope and Toni Rodriguez battled over three sets with Isabella Baumann and Jessica Stansfield from Grand Canyon University. After dropping the first set, 21-13, the LSU duo would battle back in set two, 21-16. Rasnick-Pope and Rodriguez fell in the third set though, 15-7.

Coppola and Nuss then handled business against Baumann and Stansfield, 21-14 and 22-20, to advance into the final eight of the championship. Rasnick-Pope and Rodriguez fell to the Nourse sisters, 21-19 and 21-15, in the battle for third place.

Kelli Agnew and Olivia Powers squared off against UAB’s top pair of Jaelyn Keene and Tressa Buckland. The LSU duo would push through to the Pool H final, taking the match, 21-15 and 21-15.

In the final, it would be smooth sailing for the SU duo once more, defeating ASU’s top pair of Ashley Wenz and Oluoma Okaro, 21-16 and 21-16.

Allison Coens and Hunter Domanski were unable to get another third set victory when they fell to Crissy Jones and Macy Gordon, Cal Poly’s top pair. After taking the first set, 21-14, Coens and Domanski dropped straight sets, 21-13 and 15-11.

In the match for third place of Pool D, Coens and Domanski would take down Brooke Burling and Jonny Baham of Arizona, 21-16 and 21-15.

In Pool E, Olivia Beyer and Maddie Ligon also fell in three sets to Megan Kruidhof and Mariana Molina, the top pair at Long Beach State. The LBSU duo would take the first set, 21-17, only to have Beyer and Ligon take the second set, 21-19. In a hard-fought third set, Beyer and Ligon fell, 15-13.

The LSU duo would face Haven Hill and Caroline White from TCU in the match for third place in Pool E. Beyer and Ligon would need a third set after dropping the first, 21-16, and taking the second, 21-10. In the final set, the LSU duo dominated, winning 15-7.

Coens and Domanski will face Madison Fitzpatrick and Alaina Chacon from FSU at noon. Powers and Agnew, after earning a bye, will face the winner of that match at 3 p.m.

Coppola and Nuss will face the winner of Georgia State’s Eden Hawes and Madelyn Delmonte vs. Teagan DeFalco Mikaela Raudsepp from Grand Canyon at 3 p.m. CT.