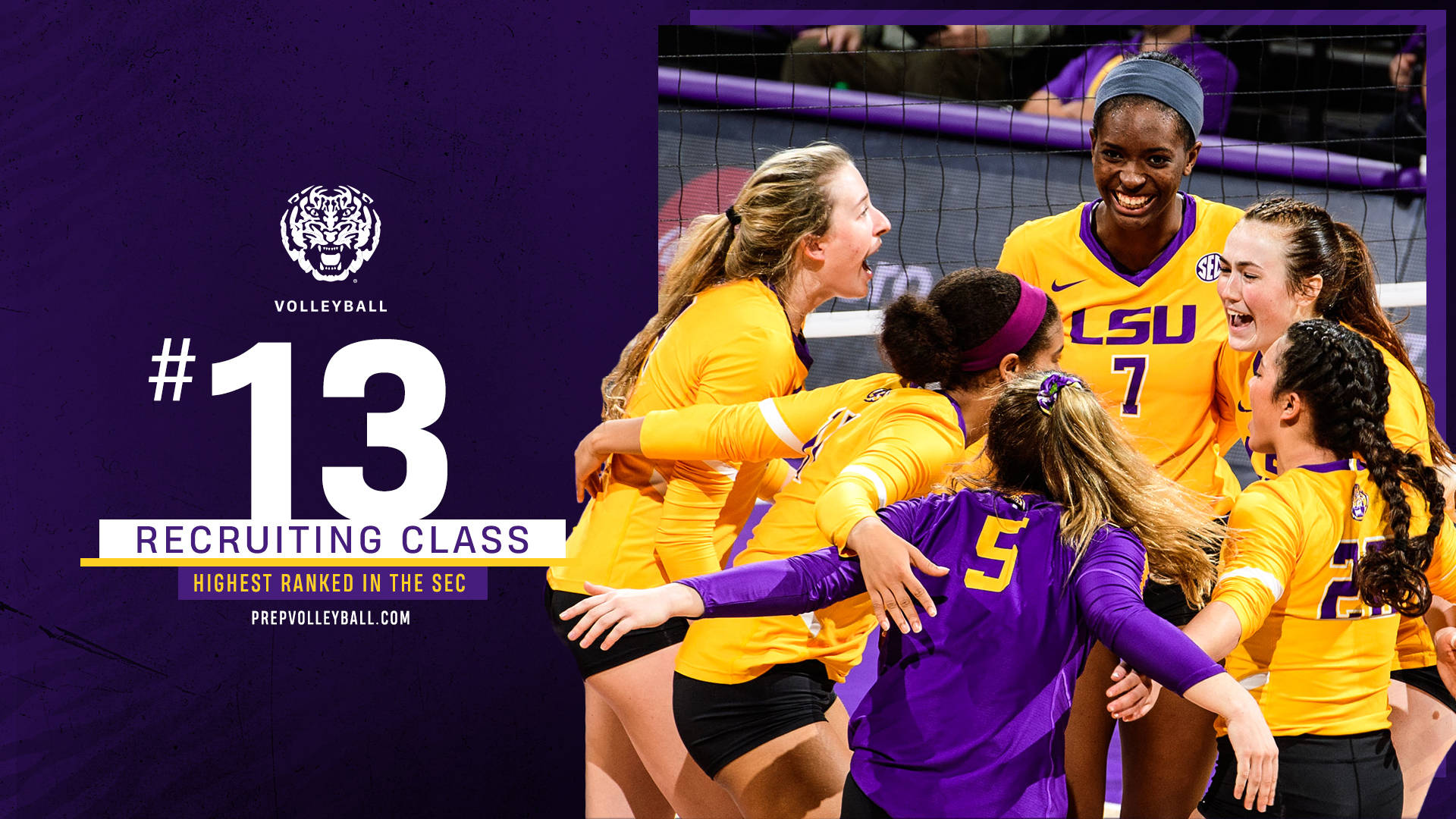 BATON ROUGE – With the No. 13 volleyball recruiting class in the country according to prepvolleyball.com, LSU has signed the highest ranked class in the SEC heading into the 2019 season.

This is tied for the highest ranked class in program history as the 2014 class was also rated No. 13 in the nation.

“This is one of the most physical, athletic classes we have added in many years.  We are thrilled to have them join our LSU Volleyball family and look forward to their impact in our program on the court, in the classroom and in the community.”

“Anita is an incredibly gifted athlete who will bring a different level of physicality to our gym,” said Flory. “Beyond being an amazing athlete and student, she is a special person whose impact in our program will reach far beyond the court. She will have an amazing future in this sport far beyond the collegiate game.”

Rose, a 5-6 setter, comes to Baton Rouge from Tomball Memorial High School in Tomball, Texas. An Academic All-District performer and a Co-District Champion, Rose has earned many honors in her prep career. She was named 19-5A District Newcomer of the Year in 2015 and earned 20-5A District Offensive MVP the following season in 2016. In 2017, she was named the 20-5A District MVP. Also picked up 5A All-State First Team honors twice and four Tomball Memorial High School MVP honors.

Rose’s older sister Allison played volleyball at St. Mary’s University, while her middle sister, Kaitlyn, golfs at the University of West Alabama. Rose played club volleyball for the Houston Skyline Juniors and has been a captain on the squad since 2013. She was the No. 52 Prep Volleyball Senior Ace. She also picked an AVCA National Player of the Week honor this high school season. She chose LSU for the family atmosphere and the volleyball’s team academic success.

“Karli is dynamic, explosive athlete who will bring a different style to the setting position,” said Flory.  “Her ability to impact the game from all facets will open the opportunity for us to run a more diverse system.  Her natural feel for the game coupled with her athleticism will allow her to be impactful from the start.”

Hill joins the Tigers from Trinity Preparatory in Oviedo, Florida. The 6-0 outside hitter is a three-time district champion and has earned Second Team All-American honors. She is an honor roll student who has played for OTVA during her Juniors career. She will play for Top Select this upcoming club season.

Her OTVA club team finished third at AAU nationals in 2016 and second in 2017, and finished fifth at Girls Junior National Championships for two-straight years (2017, 18). She is a three-time AAU All-American and chose LSU for the coaching staff and the culture of the school. Hill is also a standout track and field athlete. Her mom and dad both ran track at Arkansas State, while her brother plays basketball at Cardinal Stritch University in Wisconsin.

“Samarah is a smooth, natural athlete who has barely touched her potential,” said Flory.  “She is a 6 rotation player who will have the opportunity to impact our program immediately.  She is a fierce competitor who knows how to win.”

Morris, a 6-4 middle blocker, will join the Tigers from right here in Louisiana. She comes from Archbishop Hannan High School in Covington, Louisiana. Over this last weekend, she won the State Championship and was named MVP of the tournament. In 2015 and 2016, She was a State Runner-up and was a District Champion in 2017.

Morris picked up many honors in her prep career, including two-time All-District, two-time All-Metro team, 2017 All-District MVP and was ranked No. 53 Prep Volleyball Senior Ace. She plays for the WD Nation volleyball club and led her team to an AAU National Championship in 2017.

She is also a National Honor Society member and is a four-time honor roll nominee. Her father was on the University of New Orleans track team. Morris chose LSU because she has been an LSU fan her whole life and did not want to leave the Louisiana atmosphere.

“Allee is a physically imposing athlete, with an incredibly bright future in the sport,” said Flory. “Her ability to effect play above the net will be significant as she steps into our program. She is a tough Louisiana athlete who knows how to win and who has won on the highest level.”

Bohnet, a 5-3 defensive specialist/libero, comes to Baton Rouge from The Woodlands, Texas where she played at College Park High School. She helped her prep squad to two third place finishes at districts and an Elite Eight appearance in 2017. She played club ball for the Woodlands Revolution and helped that squad to USAV Girls Junior Olympic National Champions in the American Division in 2016. In 2018, she helped them to the Lone Star Regional Championship. In 2019, her Woodlands Revolution team earn an Open bid to USAV Girls Junior Olympic National Champions.

Bohnet has earned many accolades in her prep career and has set a few high school records. As a team captain in 2018, she set the single-game dig record (64), single-season dig record (1,057) and the career dig record (1,996). She was named Vype North Houston Player of the Year, Third Team All-Greater Houston and earned a spot on Greater Houston Coaches Volleyball Association’s preseason watch list.

“We are excited to add Jill to our 2019 class,” said Flory. “She is a positive, high energy player, who will make a difference in our program on the court, in the classroom and in the community. Her speed and ball control, along with her competitive drive, will be great additions to our gym. We are happy she is a Tiger.”

Howard, a right side/middle hitter, comes to Baton Rouge from Lafayette, Louisiana where she played at St. Thomas More Catholic High School. She helped her team to two state championships as a freshman and sophomore. She is also an Academic All-State selection and earned the Army Scholar-Athlete award. Howard played for Louisiana Volleyball club and helped her team to Disney Showcase Champions in 2016.

The 5-foot-11, right side/middle blocker, is the daughter of former LSU quarterback Jamie Howard. Her father finished his career as the third-leading passer in LSU history with 6,158 yards and second in career touchdown passes with 34.

“We could not be more excited to add Meredyth to our LSU Volleyball family. She is an incredibly gifted athlete who truly understands what it means to wear the purple and gold and compete for LSU. Her athleticism coupled with her competitive spirit make her an important addition to the 2019 class and to our program. She is a great volleyball player and we are thrilled she picked LSU to continue her volleyball career.”