Tigers Take on Arkansas in Fayetteville 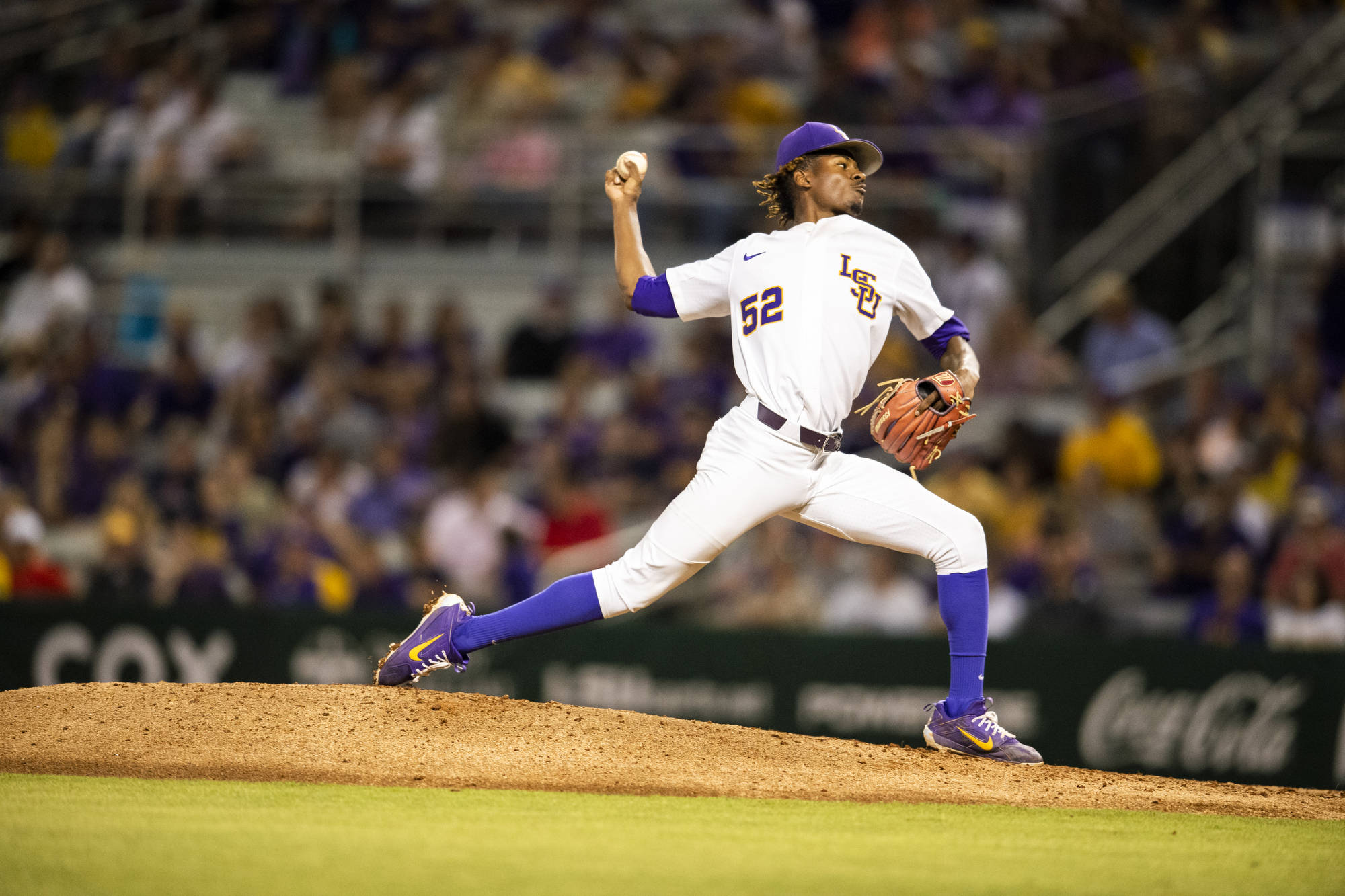 SERIES RECORD
LSU leads the all-time series with Arkansas, 73-32, and the Tigers have won 13 of their last 14 SEC regular-season series – including the past seven in a row — versus the Razorbacks, including a 2-1 series victory last season in Baton Rouge. LSU also defeated Arkansas, 2-1, in last season’s SEC Tournament semifinal round in Hoover, Ala. The only regular-season series win for Arkansas over LSU in the past 14 seasons came in 2011, when the Razorbacks swept three games from the Tigers in Fayetteville. The Tigers are 37-14 against Arkansas over the past 14 seasons (2005-18), including two wins over the Razorbacks in the 2009 College World Series.

QUOTING PAUL MAINIERI
“Arkansas is an outstanding team, so we’ve got a great challenge in front of us. We’re a little bit shorthanded with our pitching, but we’re going to go up there and battle as hard as we can. It’s a great environment, and I think our guys are looking forward to it. Hopefully, we’ll get good performances out of our starting pitchers, and our bullpen will be rested and ready to face a very good Arkansas team.”

ABOUT THE TIGERS
• LSU is 14-10 in the Southeastern Conference, and the Tigers are three games behind first-place Arkansas in the SEC Western Division standings
• The Tigers hit .331 (39-for-118) in last weekend’s Ole Miss series with six doubles, seven homers and 24 runs … the Tigers collected season-highs of 22 hits and five home runs in Sunday’s game against the Rebels
• Sunday’s game against Ole Miss featured a six-run LSU rally in the bottom of the ninth inning to tie the game at 15-15 … the uprising featured three home runs in three straight at-bats by rightfielder Antoine Duplantis, first baseman Cade Beloso and shortstop Josh Smith … the inning marked the first time LSU hit back-to-back-to-back homers since June 9, 2008, when the Tigers accomplished the feat in the first inning versus UC Irvine in Game 3 of the NCAA Super Regional … the consecutive ’08 homers were hit by DH Blake Dean, catcher Micah Gibbs and first baseman Matt Clark
• Senior rightfielder Antoine Duplantis hit . 538 (7-for-13) in the Ole Miss series with one double , one homer, six RBI and three runs … Duplantis has raised his LSU career hits total to 330, and he is now No. 3 on the all-time LSU hits list … Duplantis needs just three hits to surpass Blake Dean (332 hits, 2007-10 for second place on the career hits chart, and he needs 23 hits to become LSU’s all-time leader … former first baseman Eddy Furniss (1995-98) currently holds the LSU career hits record (352)
• Antoine Duplantis became LSU’s all-time leader in at-bats during the Ole Miss series, and he now has 1,031 at-bats in his four-year career .. the previous at-bats record of 1,019 was held by former LSU shortstop Jason Williams (1993-96) … Duplantis tied the LSU career triples record earlier this season – he and former second baseman Todd Walker (1992-94) are currently tied at the top of the school list with 15 triples
• Junior shortstop Josh Smith hit .583 (7-for-12) in the Ole Miss series with one homer, four RBI and three runs … senior third baseman Chris Reid batted .462 (6-for-13) against the Rebels with two doubles, one RBI and two runs
• Freshman first baseman Cade Beloso launched two homers in Sunday’s game against Ole Miss, marking the second multi-homer game of his career … Beloso also blasted two dingers on March 9 against California
• Junior right-hander Zack Hess, the Tigers’ No. 1 weekend starter throughout the past two seasons, was moved to the bullpen prior to the Ole Miss series, and he delivered a brilliant performance in Friday’s win over the Rebels … Hess worked four innings (55 pitches), allowing one run on three hits with one walk and seven strikeouts
• Sophomore catcher Saul Garza launched a three-run homer in Sunday’s game against Ole Miss, marking the third straight weekend he has homered in an SEC series (vs. Florida, at Alabama, vs. Ole Miss) … Garza had not homered this season prior to the April 18-20 Florida series

ABOUT THE RAZORBACKS
• Arkansas is No. 3 in the SEC in team batting average (.309), and the Razorbacks have hit 64 home runs, the second-highest total in the league
• The Razorbacks are No. 7 in the SEC in team ERA (4.00)
• Arkansas is led offensively by sophomore outfielder Heston Kjerstad, who is batting .327 with 42 RBI and a team-best 13 homers … sophomore infielder Casey Martin is hitting .302 with 19 doubles, 11 homers and 47 RBI, and junior outfielder Dominic Fletcher is batting .317 with 19 doubles, nine homers and 45 RBI
• Game 1 starting pitcher Isaiah Campbell is No. 9 in the SEC in ERA (2.54) … he’s first in the league in innings pitched (78.0) and fourth in the conference in strikeouts (87) … junior left-hander Matt Cronin has 10 saves, the second-highest total in the SEC